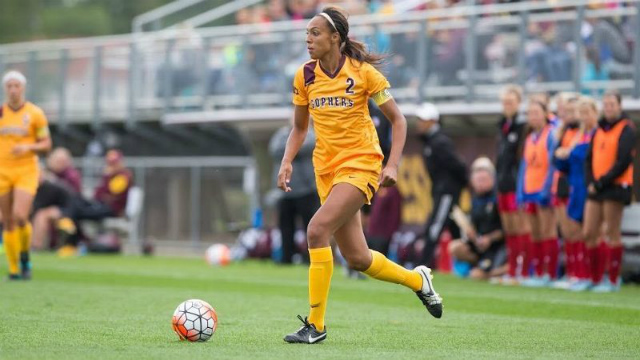 The defending national champions are set to be among the college teams hit the hardest by U.S. U20 World Cup call-ups, with Ellie Jean, Rose Chandler, Maddie Elliston, Kaleigh Riehl and Emily Ogle slated to miss the entire season for a trip to Papua New Guinea. Add that to the graduation of sensational seniors Raquel Rodriguez, Mallory Weber and Britt Eckerstrom, and the champs have gaping holes to fill. Pieces remain that could certainly contribute to a successful season, however. Brittany Basinger is a seasoned veteran in defense, while Elizabeth Ball anchors things centrally and Megan Schafer and Frannie Crous can cause trouble up front. Nickolette Driesse is the team’s lone senior, while foreign imports Laura Freigang and Grace Fisk add intrigue to the mix. It’s a shame the U20 World Cup conflicts with the college season, as the chance of a repeat wouldn’t be impossible for Penn State.

If Penn State slips up in league play, look for the Badgers to pounce. Guided by talismanic midfielder Rose Lavelle, there’s talent in Madison ready to make a run. Goalkeeper Caitlyn Clem earned Second Team All Conference honors, while Lavelle’s will look to pick out dangerous Canadian front-runners like Emily Borgmann and Victoria Pickett, both coming off solid freshmen seasons.

The dream season of last year ended in the College Cup, going somewhere Rutgers soccer had never been before. Repeating that success won’t be easy, as sensational center backs Erica Skroski and Brianne Reed are both plying their trade in the NWSL this fall. Goalkeeper Casey Murphy’s expected redshirt will be a blow to a defense that has to retool and rebuild, though there are standouts like Colby Ciarrocca, Kenie Wright and Erin Smith that can help the Scarlet Knights keep the momentum going.

After a couple of years of steady improvement on the recruiting front, things came together on the pitch for Northwestern in the 2015 season, securing an NCAA Tournament spot after putting together a solid campaign. Seven starters return from that squad, including goalkeeper Lauren Clem and Nandi Mehta. Replacing the goal-scoring production of Addie Steiner will be critical, and local recruit Maddy Lucas could be one of those counted on to assist in that department. Provided the offensive piece is secured, Clem and the defense should be good enough to build on the success of last year.

Under Greg Ryan, the Wolverines are always a tough team to take down, approaching each game with stout and organized defending, while looking to its talented front-runners to solve the opposition. Ani Sarkisian has been one of those talented players up front looking to make something happen, while injuries are set to limit the availability of Taylor Timko, who tied with Sarksian for the team lead in goals. Sura Yekka is set to sit out the 2016 season because of the U20 World Cup, while Kelly Sweeney will miss the whole season due to injury. That is sure to leave Michigan slightly undermanned, though talent like Reilly Martin and Nicky Waldeck are some of the players that could step up and fill the gap.

Given the uncertainty in last year’s contenders, there’s every reason to like the Gophers as a Big Ten regular season sleeper. First off, there’s a quality schedule in terms of non-conference opposition (on the road against Duke, Stanford and Santa Clara) and who they face at home (Penn State, Wisconsin and Ohio State). Then, there’s a talented group of players fresh off a solid season. That includes the dynamic and at times unstoppable Simone Kolander, the reigning Big Ten Offensive Player of the Year. Other experienced standouts include Rashida Beal, Josee Stiever, April Bockin and Molly Fiedler.

Another program that could sneak in under the radar and make a run at the top of the Big Ten standings, the Buckeyes bring back 10 starters, including Canadian striker Nichelle Prince, currently in Brazil for the Olympics. That experience should prove valuable as she leads the attack. Nikki Walts and Lindsay Agnew also inject quality into the team’s offense. Don’t be surprised to see the Buckeyes rise this season.

The big story for the Illini heading into a new season is its first campaign without Jannelle Flaws. While her goal-scoring production waned last season from previous highs, Flaws as the focal point gave Illinois something to focus on in the final third. Kara Marbury showed signs of being able to contribute last season, scoring six and adding two assists as a sophomore. Whatever the case, experienced senior goalkeeper Claire Wheatley is someone they can count on as Illinois looks to state its case for Big Ten contention.

Another intriguing team that could be poised for a good year, the Spartans first must figure out their defense after the graduation of Mary Kathryn Fiebernitz. Should that get sorted quickly – and Jessica Kjellstrom is certain to factor into that – Michigan State has some intriguing and dynamic attacking weapons. That includes junior Jamie Cheslik and Alexis Warner, who finished top two on the team in scoring last season.

A season-ending ACL injury to Jaycie Johnson sidetracked the Huskers offense in 2015, and with it, their hopes of another memorable season (they were 6-3-1 before her injury). If she’s healthy and can return to form this fall, there is a lot to like about the rest of Nebraska’s side. Caroline Flynn earned a call-up with the U.S. U23 WNT, which brings helpful experience back to this year, while fellow senior Sydney Miramontez is another quality player to rely on.

There was solid and steady progress under Drew Groff in 2015, his first season in charge of the Boilermaker soccer program. The winning record was the program’s first since 2009, and this year could be even better. Fourteen seniors are on the roster, while Roff’s first recruiting class includes nine players. Hannah Leinert and Maddy Williams are two of those seniors, and Leinert didn’t look out of place in her first Big Ten season after transferring with Roff to Purdue. Dagny Olson and Andrea Petrina can both score and create from midfield spots. Whether it comes together or not for this season will dictate the team’s success.

After a scintillating 2014 campaign, the Hoosiers failed to win any of its 11 games in conference play a year ago. Things should be trend in a positive direction, though it’s an extremely young roster joining. With 13 freshmen on the roster (including redshirt), the number of first year players is almost more than every other class. Depending on how quickly players like Julia De Angelis, Sarah L’Hommedieu and Macy Miller adjust, could dictate what 2016 looks like in Bloomington.

Similar to Indiana, it was a big swing in the opposite direction for the Hawkeyes after a quality campaign back in 2014. The starting point for the Iowa staff has to be improving its record in the Big Ten, after winning just a single game last year. Only a trio of seniors is on the roster, including Bri Toelle, while there are 10 freshmen looking to provide a lift in a new campaign.

It’s a new era and perhaps one that will be rebuilding over the next couple of seasons in College Park, as former Harvard coach Ray Leone was hired in January. He’ll have his hands full improving a roster that lost quite a bit from its verbally committed players and a few others that transferred out, though five late additions to the roster, including Pitt star Jarena Harmon, should be a boost, along with the transfer of Katelyn Jansen. Cassie Phillips is likely to be a key figure on the field, while Jensen and Rachel Egyed will have her eye on the starting goalkeeper role after program great Rachelle Beanlands graduated.