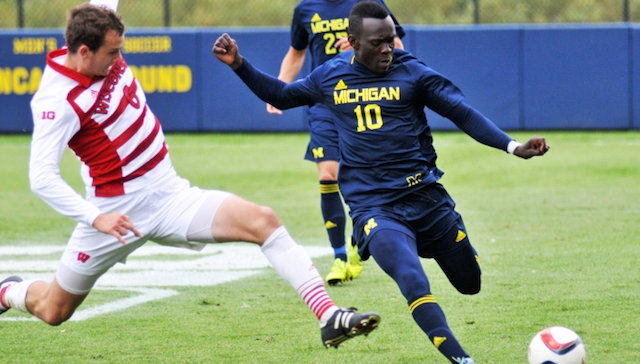 Ohio State won the regular season crown in the Big Ten in 2015. The Buckeyes impressive defense and commitment to the game plan helped lead the team to the five-win campaign in league play. The Buckeyes need to replace goalkeeper Chris Froschauer and Big Ten Defender of the Year Liam Doyle, both of whom were seniors last season. Transfer Andrew Lombard, a U.S. U20 Men’s National Team defender, should step into the starting lineup immediately and help fill some of that void. The Buckeyes are also counting on Nate Kohl to have a big season in 2016. Seniors Danny Jensen and Christian Soldat lead the quick strike attack for the defending regular season champions.

The Hoosiers enters the 2016 campaign with high expectations, picked to finish second in the conference in the preseason coaches’ poll. Midfielder Tanner Thompson along with defenders Andre Gutman and Grant Lillard are expected to lead the way for Todd Yeagley’s side this season. Thompson is the defender Midfielder of the Year in the conference.

Maryland lifted the hardware in the conference tournament last season. The Terps bring back many of the key pieces from last year’s squad including goalkeeper Dakota Niedermeier, who played at an absurdly high level for the last month of the season. Maryland will also be counting on new players Gordon Wild and Jake Rozhansky to steer the ship in the attack. The transfers bring quite a bit of talent into the squad, which already had Eryk Williamson and Sebastian Elney.

Rutgers’ star Jason Wright is back for his junior season after winning the Big Ten Offensive Player of the Year in 2015. Wright continues to improve with each season, but he will be a marked man this fall as there is nowhere to hide with every defense designed to stop the speedy attacker. Goalkeeper David Greczek is another one to watch for the Scarlet Knights this season.

Michigan is also counting on experience to help this season. The Wolverines feature an old backline with returners Lars Eckenrode, Rylee Woods, Andre Morris, and Billy Stevens back in Ann Arbor. The four have combined for 152 starts in their college careers. In the attack, Francis Atuahene is the star and the one to watch this fall.

Wisconsin ended the preseason on a high note with a 3-1 win over Creighton. After being selected seventh in the preseason poll, the Badgers are trying to defy expectations this season. Juniors Alex Masbruch, Chris Mueller, Tom Barlow, and Mark Segbers are the players to watch as well as sophomore defender Sam Brotherton.

Juniors Ken Krolicki and Jimmy Fiscus are the key players for the Michigan State Spartans this fall. Krolicki and Fiscus have been solid college contributors since their arrival in East Lansing. The Spartans will also be counting on sophomore Ryan Sierakowski and freshman Giuseppe Barone to lead the attack.