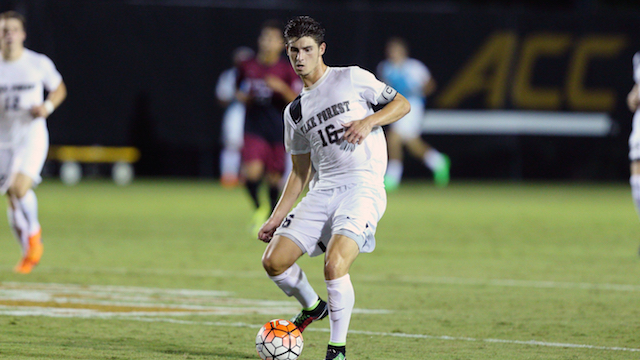 Wake Forest was the regular season champion in the ACC last fall. The Demon Deacons went undefeated through league play as freshman sensation Jack Harrison propelled the squad to a nearly dream season. Harrison left for MLS after only one year, but the Deacons still have a fair bit of talent on the roster for this season. Midfielders Ian Harkes and Jacori Hayes were both on the All-ACC First Team in 2015. They are two of the three First Team members returning for the 2016 campaign. As long as Wake Forest continues to dominate the center of the field, the Demon Deacons will be in a good spot to repeat last fall’s success this season.

Clemson has the most pieces to replace this year. The Tigers lost goalkeeper Andrew Tarbell, midfielder Pail Clowes, defender Kyle Fisher, and forward TJ Casner. That’s a hefty bill to pay for the players trying to take over those roles. Clemson does return Iman Mafi as well as Patrick Bunk-Anderson, who both earned conference honors last season. The Tigers will also be counting on a big season from forward Diego Campos.

North Carolina was selected as the preseason favorite in the conference poll. The Tar Heels lost Jonathan Campbell as well as midfielders Raby George and Omar Holness from last season’s squad. North Carolina brought in the top recruiting class for 2016, which should help fill those voids immediately.

Notre Dame senior center back Brandon Aubrey is one to watch this fall. Aubrey only started one game as a freshman in 2013, but since then he has been a mainstay in the Notre Dame lineup. He is one of the best defenders in the ACC, and could lead Notre Dame to the top of the conference this fall.

Virginia is going to look like a pretty new squad this seaosn with the amount of turnover in Charlottesville. Jefferson Caldwell is back in goal while Sheldon Sullivan and Paddy Foss are back to lead the group on the field. Pablo Aguilar, Nicko Corriveau, and Edward Opoku are all expected to make big contributions this fall.

Boston College is leaning on creative attacking midfielder Zeiko Lewis to help put this squad into contention in the ACC. Lennart Zeugner and Simon Enstrom are the other two players to watch this season for the Eagles.

After winning the conference tournament in 2015, Syracuse was selected to finish third in the Atlantic Division in the ACC preseason poll. The Orange lost a lot of key players from last year’s team, but they do bring back Miles Robinson as well as Liam Callahan. Transfer Sergio Camargo is one to watch as well.

Duke is looking at new faces to make this season a successful one. Freshmen Suniel Veerakone, Max Moser, and C.C. Uche started the preseason game against Georgetown. Graduate transfer Robert Moewes started in goal. With Zach Mathers and Jeremy Ebobisse gone, Duke needs everyone to step up and fill the holes around the field.

Beyond the two Wake Forest returners, Louisville defender Tim Kubel is the other All-ACC First Team member back in 2016. Despite Kubel’s return, expectations seem to be down for the Cardinals, which were selected to finish fifth in the Atlantic Division.

Preseason results don’t mean anything, but a 1-6 loss to Coastal Carolina should raise some alarms for NC State. The Wolfpack has enough returners on the roster to be competitive in the conference this fall, but the early indications are concerning.

Virginia Tech is trying to get back into the race in the ACC, as the program has struggled in recent years to be competitive in the top conference for college soccer. This season’s team has a number of new faces looking to make an impact immediately.

Former Wake Forest coach Jay Vidovich is now in charge of the Pitt Panthers. Vidovich is a five-time Coach of the Year. He will earn his paycheck if he can turn the Pitt program around and pick up some results in the ACC.