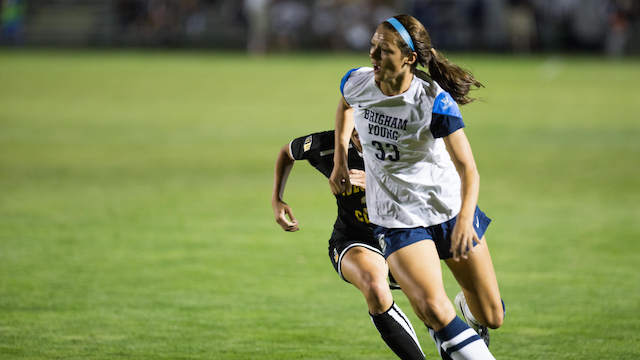 Idaho ripped and rolled through the conference in 2015, but the Vandals from Moscow came up short in the conference championship game as Northern Colorado snatched the automatic berth to the NCAA Tournament in a penalty kick shootout victory. The good news for Idaho is the squad returns all 11 starters from last year’s dominant side. Goalkeeper of the Year Amanda Poertner is back for her sophomore campaign. First Team honorees Kavita Battman, Amanda Pease, Alyssa Lloyd, and Josilyn Daggs are also back and hopeful to lead the Vandals into the Big Dance this season. On Monday, the fellow coaches in the conference selected Idaho as the preseason favorite so there are lofty expectations on this group.

It was not a runaway for Idaho though. Northern Colorado picked up three first-place votes in the preseason poll. The Bears return seven starters from last season’s team including star forward Mariel Gutierrez. The gifted sophomore will be looking to build off last season’s campaign where she scored seven goals including four game-winners.

Eastern Washington is also expected to be in the mix for the top honor in the conference. Surprisingly, Eastern Washington also returns 11 starters from last year’s team. The gamble on the young squad last season should pay dividends this season as reigning Offensive Player of the Year Chloe Williams leads the squad into the 2016 campaign. Williams scored 11 goals last season to lead the way for the Eagles. The hometown hero is the player to watch in the conference this season.

While the rest of the league is looking at a bunch of returners, Weber State is going to be looking at a number of new faces in the starting lineup. The Wildcats return five starters from last season’s squad, which finished fifth in the league. However, it would be ignorant to count Weber State out of the title race. The Wildcats still have Chansi Crompton who is only two assists away from becoming the league’s career assists leader.

Montana’s roster is full of returners with 21 players from last year’s squad back for 2016. The large amount of returners creates an advantage for the Grizzlies in the bid to jump into the top three this season. Look out for Tess Brennaman and Kailey Norman as the leaders for the group this season.

Sacramento State is another team with all 11 starers from last season back for this campaign. The Hornets have 13 seniors on the roster as the coaching staff is looking at the veterans to provide the leadership to keep this team in the top half of the league standings.

One of the teams going through a rebuild in the Big Sky is Northern Arizona, which finished seventh in the league last season. The Jacks have 26 players on the roster who are underclassmen. The Flagstaff group is looking to replace four All-Big Sky selections from the 2015 team. However, the opposing coaches in the conference still have high expectations for the group, as they were selected to finish fifth in 2016 in the preseason poll.

Southern Utah head coach Becky Hogan has been steadily building the program in Cedar City. After picking up eight wins in 2015, the goal looks to be on cracking double figures this season. The Birds return 23 players for this season and brought in seven new recruits including two transfers who should contribute immediately.

Portland State is hoping to defy expectations after being picked eighth in the preseason poll. The Vikings need to fill some holes as Cori Bianchini and Angela Haluska are gone. However, the Vikings can count on Kristin Moyer and Katie Forsee to lead the way in 2016.

North Dakota returns nine starters from last season’s team as well as the vast majority of the offensive output. The Fighting Hawks were tabbed to finish 10th in the league in the preseason poll.

Idaho State failed to pick up a point in league play last season, so there is a lot of room for growth in the 2016 campaign. With only two seniors on the roster though, this might be another year of struggles for the Bengals. The nine freshman headed to Idaho State could be the key piece to building this program for the future.

Cal State Fullerton advanced to the NCAA Tournament for the third straight season in 2015 after winning the Big West Championship yet again. The Titans dominance in the conference tournament is close to becoming a dynasty for the program in the Big West. This season will be more difficult for Fullerton as the program lost some of the best players in the league. Rebecca Wilson, Christina Burkenroad, and Morgan Batcheller were all Big West First Team members and seniors in 2015. Fullerton does return Jennifer Stuart and Connie Caliz, which should keep the squad near the top of the conference in 2016.

Long Beach State nabbed an at-large berth to the NCAA Tournament in 2015. Long Beach only loses one First Team member from last year’s squad as Val Margerum was a senior last season. Ashley Gonzales and Mimi Rangel make up the core of the squad for the 2016 season.

UC Santa Barbara finsihed in a three-way tie for first in the Big West regular season standings, but the Gauchos were the only program tied for first to miss out on the NCAA Tournament. The bitter taste should be the driving force for this season for Paul Stumpf’s side. Mallory Hromatko, the Big West Freshman of the Year, is one to watch in 2016 after nabbing a spot on the First Team in 2015.

Keith West’s Cal State Northridge side is trying to get back to the top of the conference in 2016. The Matadors return eight players who scored goals last season. Taylor Hobson, Cynthia Sanchez, and Kourtney Kutscher are the trio to watch this fall for Northridge.

The Aggies return seven starters from last season as Twila Kaufman enters her third season as the third coach. Kaufman’s group has improved with each season so the expectations are growing for 2016.

UC Irvine brings back conference honorees Kiana Palacios as well as Brittany Nguyen for 2016. That duo combined with some experienced transfers should help Irvine get back into the mix among the top teams in the conference.

Cal Poly has the biggest void to fill in the Big West as four-time First Team honoree Elise Krieghoff has graduated. The Mustangs will need to replace that production in 2016, and that is going to be a challenging task.

Hawaii struggled in league play last season so the players set out to make sure that did not happen again, as the group got together over summer to get everyone on the same page for the season.

BYU was one of three teams from the West Coast Conference to advance to the NCAA Tournament in 2015. The Cougars won the league thanks to an impressive campaign throughout league play. In 2016, BYU might be even better. Ashley Hatch is back from injury, which derailed her junior season through the last half of the year. WCC Player of the Year Nadia Gomes is also back on board. Hatch and Gomes could be the best twosome in the West this season.

The Dons enjoyed a dream season in 2015 with the program setting new bests in overall wins, conference wins, and conference finish. Jessica Nakae, Ali Schaffer, Amanda Whittle, and Samantha Jehnings make up the core group of returners for the Dons in 2016.

Like San Francisco, Loyola Marymount is looking to build off a dream season from 2015. The Lions finished with an all-time program record in wins after nabbing 15 during the campaign. It’s not all good news for LMU though. Replacing Jocelyn Blankenship, Morgan Hilby, and Callie Taylor will be difficult, but strong recruiting classes over the past few seasons should leave some quality in the reserves for the Southern California program to keep building on the dream season.

Santa Clara, Julie Johnston’s college, is trying to get back to the top of the WCC in 2016. Jerry Smith’s side finished in fourth last season and returns four All Conference Honorees. The question for the Broncos is in goal, as two freshmen and a sophomore make up the contingent of goalkeepers on the roster.

Allison Wetherington and Ellie Boon lead the way for Portland in 2016. The two Pilot seniors were the headliners of a recruiting class four years ago and now look to be in line to push the Portland squad back to the top of the WCC.

Christina Settles, the WCC Freshman of the Year, and Brianna Visalli, a WCC First Team member, lead the way for Pepperdine in 2016. Tim Ward’s group will need others to step up and help those two in the competitive conference.

After finishing with only five wins in 2015, San Diego is looking at a turnaround year in 2016. The Torreros are aiming at a much better showing with a slightly older group this fall. Ada Greenwood’s side will be counting on the eight seniors on the roster to help lead the talented recruiting class into a strong showing this season.

Saint Mary’s returns eight starters from last year’s squad, as the Gaels look to make the jump into the top half of the conference. Travis Clarke’s group has 13 newcomers to add some depth to the squad.

Pacific is building the squad around Alex Hussar and Kendall Bietsch for the 2016 season. The twosome were All Conference honorees last season, as Pacific searches for some success in the conference.

Gonzaga also returns eight starters for 2016. The Zags are counting on forward Karley Baggerly to continue her offensive output this season after netting eight goals in 2015.