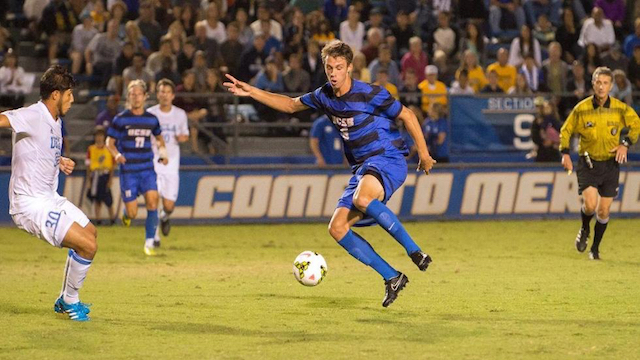 Cal State Fullerton lifted the conference title again in 2015, as head coach George Kuntz continued to establish his dominance in the Big West Tournament. The Titans return all of the players who made a conference team in 2015. Midfielder Ronaldo Pineda is one of the ones to watch this fall, as he is the catalyst of the side from the center of the field.

UC Santa Barbara was the regular season champions in the Big West thanks to the offensive output of Nick DePuy as well as an improved defense. The Gauchos face another challenging proposition in 2016, as a few of the key pieces from 2015 are gone to the professional realm. Winger Geoffrey Acheampong, the 2015 Big West Freshman of the Year, signed with SC Bastia, a French club. Goalkeeper Justin Vom Steeg is no longer listed on the roster, as he seems set on trying his luck with clubs in Europe. The Gauchos will rely on a talented recruiting class once again and hope that the early exits don’t leave too big of a hole to fill, as the Gauchos search for a deep run in the NCAA Tournament in 2016.

Cal Poly enters its second season under Steve Sampson’s guidance this fall. Sampson only returns five starters for this fall, so he has a lot of work to do with the Mustangs. Keep an eye on seniors Justin Dhillon and Ruben Duran as the leaders of the squad.

Cal State Northridge managed to pick up eight wins in 2015, which is respectable for a lot of programs but felt like a down year for the Matadors. This year is already off to a better start with a 2-1 win over California on Sunday in the first exhibition game of the season. While the games does not count for the standings, it is a huge relief to the coaching staff to see the offense clicking from the onset after failing to score in two exhibition games last season. The Matadors will be counting on senior Patrick Hickman to lead a relatively young squad this fall. Hickman and Andrew Rizeq are the only Big West honorees from last season who are back with the group for the fall.

In many ways 2016 feels like a repeat of many previous seasons for UC Davis as the coaching staff builds a strong defensive squad that looks to challenge for the title in the Big West. However, the Aggies have one big difference in recruit Nabi Kibunguchy, who is one of the best to head to Davis in some time.

UC Irvine endured a disappointing 2015 as the Anteaters only picked up five wins. The Irvine squad had a lot more talent on the roster than a five-win team. The new season is a chance to get the group back on the right page, as Irvine hopes to contend for the title in the conference and return to the NCAA Tournament.

The 0-5 loss to Stanford in the exhibition opener on Saturday for Sacramento State might have some concerned about the program for the upcoming season. The early wake-up call could serve the purpose of waking up the team to the level among college soccer’s elite. If not, senior goalkeeper Philip Bru will be getting quite a bit of work in 2016.

UC Riverside struggled in conference play last season as the Highlanders couldn’t quite get it right in a tough conference for men’s soccer. The approach for 2016 will be different though, as Riverside added some quality in the freshman class to help put the team in the right spot to compete this fall.

Santa Clara looks like the team to beat in the WCC this fall. The Broncos return stud forward Carlos Delgadillo as well as defender Valdemar Andersen. The stacked squad does need a new goalie after Kendall McIntosh’s eligibility expired. However, the Broncos are still riding high after that triumphant charge to the league crown last season.

San Diego put three players on the WCC First Team in 2015. All three were seniors. San Diego will need to fill a lot of holes in 2016 if they hope to be in the mix as title contenders once again. Michael Turner and Thomas Olsen headline the returners for San Diego.

Seniors Alex Braman and Rafael Sanchez lead the way for Saint Mary’s this fall. Braman, a product of the Colorado Rapids Academy, is one of the best defenders in college soccer and an ironman of the backline with over 4400 minutes played for the Gaels.

Loyola Marymount might not have the right defense to win the league, but the Lions definitely have the attack to claim the title in 2016. Midfielder Adrien Perez is back after missing most of his junior season due to injury. He could be the best player in the conference. Frehsmen Lucky Puengrod and Brandon Sanchez look to have bright futures at the collegiate level as well, and could be in line for big seasons in 2016.

Ben White was great for Gonzaga in 2015, but the Zags need more from the attack in 2016 after getting shutout in three of the final six games. Transfer Denis Kalamar could add some punch to the attack this fall after playing in the spring season with the Zags.

Portland is going to be a completely different team this fall. New head coach Nick Carlin-Voigt has already started recruiting a different level of talent to the former powerhouse. The former UCLA associate head coach has his work cut out for him though after the Pilots only won one league game last season. Newcomers Kris Reaves and Malcolm Dixon have the talent to be among the best players in the conference after making a mark on the ACC in the past.

After a strong debut season, Pacific forward Tristan Blackmon took a bit of a step back as a sophomore in 2016. Blackmon is the key piece of the attack so Pacific needs him to return to form this fall if the Tigers hope to get back into the top half of the standings.

It’s going to be hard for Seattle to top the season that they have in 2015 this fall, but they have the talent on the roster to make a good run at getting further in the NCAA Tournament. Star defender Kyle Bjornethun is back for his senior campaign. David Olsen, the breakout star of 2015, is back for his junior campaign. Plus, there is a lot of quality surrounding those two pieces.

Greg Maas is building an impressive program at Utah Valley. After winning nine games in 2014, the Wolverines won 14 in 2015. Utah Valley returns nearly the whole roster from last season, which should help against a challenging non-conference schedule. Alex Neff, a defender, is one of the standouts on the roster and one to watch this fall.

Daniel Musovski is the story for UNLV. He has scored 20 goals in two seasons with the Rebels. Musovski is in the conversation among the best forwards in college soccer, and he continues to prove that in each game.

Houston Baptist was 5-1-1 at home in 2015, but the Huskies only managed two wins on the road in seven games. That number needs to improve this season if the Huskies want to challenge at the top of the conference. Second team All-WAC honoree Marcelo Acuna transferred to Virginia Tech, which is a big blow to the team for this season.

CSU Bakersfield is trying to jump back to the top of the conference this fall. The Runners are counting on goalkeeper Nicolas Clever as well as forward Julian Zamora to propel the group this season.

Air Force has already made history this season. Ben and Nick Blessing became the first set of twins to join the program, which began in 1956. The Blessings are part of an 11-player class for Air Force, which is looking to improve on the four-win conference record from last season.

UMKC’s season did not get off to a good start. The Roos lost 2-0 to MidAmerica Nazarene on Saturday in their preseason exhibition opener. Freshman goalkeeper Filippo Errico made six saves in the game. He is one of 13 international players on the UMKC roster for the 2016 season.

Ben Conway returns to Incarnate Word for his senior season this fall. Conway was a All-WAC Second Team member in 2015. The English attacker has the quality to put Incarnate Word into the conversation among the teams in the top half of the table in the conference.

Schellas Hyndman is hoping for a better return for his group in his second season in charge of the program. Hyndman pulled in an impressive recruiting class for this fall. Center back Hector Montalvo should step in immediately and help the defense.

Paul Leese is trying to rebuild the program at UT Rio Grande Valley, and that comes with some big challenges. Leese’s side picked up two conference wins in their debut season in the WAC. Isidro Martinez led the team in scoring in 2015, and he should be the key piece for 2016.