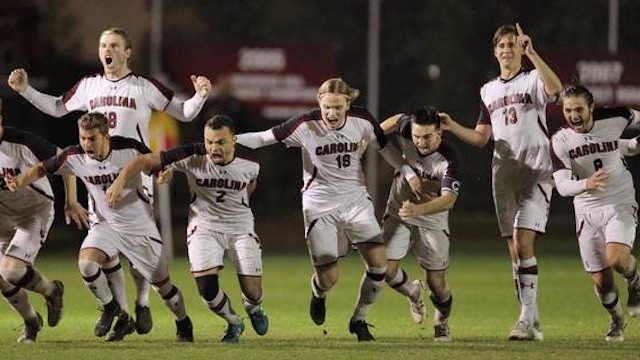 The CAA flexed its postseason muscles by putting two teams in the Big Dance, an impressive achievement for any mid-major fighting upstream against strength of schedule. The 2015 season was the year of Hofstra, as they managed to capture both the No. 1 seed in the conference tourney and win the thing. Behind the calming influence of midfielder Joseph Holland, Hofstra advanced to the second round of the NCAA tourney and brings enough back to feel excited about a chance to repeat.

Elon, though, shouldn’t be overlooked. The Phoenix also made it to the second round of the NCAA tourney in 2015, although they were absolutely decimated by graduation in the offseason. They lost a whopping five all-conference players to graduation, including the league’s best defender in Nathan Diehl, leaving a smoking crater for the remaining talent to fill. There is talent here to be sure, but with this much to replace, it’s hard not to see Elon taking a small step back in 2016.

One of the surprises of the league in 2015 was Delaware, a team most expected to not only win the CAA but also make the NCAA tourney. The Blue Hens did neither, leaving many to wonder if their window is about to close. That window is currently propped open by forward Guillermo Delgado, a player of the year watch lister and one of the best forwards in the country. Midfielder Joe Dipre moved on, but he’s surrounded by a cloud of talent: Thoams de Villardi, Thibault Philippe, John Schroeder among them. Whatever happens with the rest of the league, this is Delaware’s shot to finish at the top.

UNC Wilmington lost an outstanding senior class after a .500 season, including game-changing forward Colin Bonner, who had a conference POTY shout. They also lost keeper Sean Melvin to a Vancouver Whitecaps 2 contract in January, so there are some key spaces to fill as Ben Fisher steps into a suddenly key sophomore year in the midfield. Charleston and James Madison both look to be improved in 2016, Charleston in particular. Kevin Shields is the best keeper in the league, while Nico Rittmeyer and Cesar Murillo are pieces to build around. Don’t be surprised to see Charleston snap up a top three seed in the conference tourney.

There was no questioning the league’s best team and, for that matter, its best player in 2015. Kentucky might not have captured the conference tourney crown, but the Wildcats didn’t lose a single conference game in the regular season and made the first round of the NCAA tourney. Callum Irving, the super-keeper who now plays in the USL with the Houston Dynamo’s farm team, earned three all-conference honors and backstoped one of the best defenses in the country.

Kentucky and Charlotte, two of the best teams in the league for the last couple years, face uncertainty in 2016. Irving and Charlotte’s Kyle Parker, the best defensive and offensive players in the league respectively, are both gone. Kentucky is probably better positioned to absorb the loss, as the trio of Napo Matsoso (maybe the league’s best returning player), Stefan Stojkovic and Jordan Wilson is tough to match. Charlotte, which had the better 2015 NCAA tourney, will probably struggle more. A lot will be asked of Brandt Bronico, the 49ers’ only preseason first-teamer.

Watch out for South Carolina to make some noise. The Gamecocks were a whisper from advancing into the third round of the NCAA tourney over UC Santa Barbara, and the return of midfielder Danny Deakin gives them a legit league POTY candidate running the show. Meanwhile, if Old Dominion can build on last year after being exceedingly young at a few key positions, they could creep closer to double digit wins.

FIU was the surprise of the league in 2015, winning 12 games and scoring a few upsets as the No. 5 seed to win the league tourney and a spot in the Big Dance. They might struggle to capture that kind of lightning in a bottle again, but a moderate power vacuum should allow them to be competitive with Luis Betancur back. Keep an eye trained on New Mexico as well. The Lobos aren’t that far removed from a College Cup run, and the return of Niko Hansen and Chris Wehan should mean improvement in 2016 for a team that expects to make the NCAA tourney every year.

UIC has won the regular season Horizon crown in two of the last three years, including 2015, which is a credit to the work 2015 coach of the year Sean Phillips and his staff have done in building the program. That said, the Flames have their work cut out to return to the pinnacle in 2016. They lost twin behemoths Jorge Alvarez and Manny Chavez along with their 10 combined goals from last year. That’s why it certainly looks as though Wright State and Oakland are the presumptive favorites to battle it out for the league crown.

Wright State’s sixth-place finish in the regular season standings was a perfect commentary on how much of a grinder this league can be. Wright State had as much talent as anyone but learned some hard lessons on the field, which should help them as they entered a favored 2016. Senior forward and former New England Revolution academy member Peguy Ngatcha may be the best finisher in the league, and Eric Lynch remains a quality set-up man.

Oakland might be even better. Game-changer Austin Ricci returns, as does Nick Strack to anchor a defense that managed seven shutouts last season. Oakland has been remarkably stout defensively over the past couple seasons, and that could well carry them to a conference title in 2016. The Grizzles will certainly be fancied, and nobody has more returning talent in the league.

Northern Kentucky enjoyed a charmed 2015 in its first season in the league but could fall back into the pack thanks to a glut of missing pieces. Indeed, the next tier certainly looks like Valpo, Cleveland State and Milwaukee, all of which have enough returning talent to mount a run at a conference title and surprise some folks.