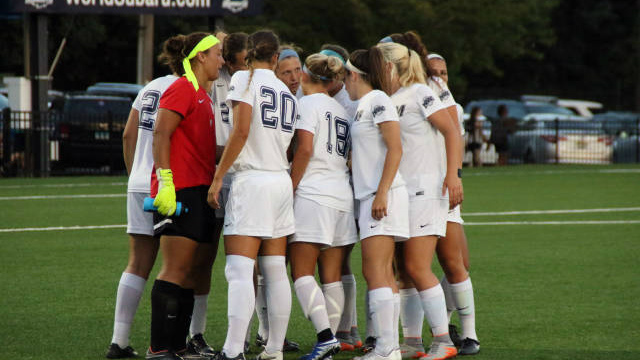 Once again, Monmouth enters the college season as the favorites in the MAAC, as the Hawks seek a fourth straight regular season conference title. Alexis McTamney is back to once again power the Hawks’ attack, with five of the nine all-league members returning to the fold to lead the charge.

It should be noted that Monmouth fell short of the NCAA tournament, as Siena College edged Manhattan in the conference tournament championship a year ago. Both of those teams, along with Rider should be considered in amongst the likeliest contenders of knocking Monmouth off the regular-season summit. Defensive Player of the Year Jenny Bitzer is back to lead the Manhattan back line, while Erica Modena and Nicole Copping provide support in the spine. Modena finished second in the conference last year in goals scored and will seek an encore performance.

After making the tournament last year, Siena has something to build on as it looks to make a run in the regular season. With seven starters back and seven of its top-eight goal scorers returning, there is reason for optimism. Tara Sobierajski and junior midfielder Madison Vasquez are both going to have to be central to those hopes of spinning together something in the regular season.

Opponents can sleep on Rider at their own risk. The New Jersey program captured the MAAC crown back in 2014, and has plenty of talented players to call upon this season. English seniors Hollie Kelsh and Bethany-May Howard provide experience and talent, while Meghan McCabe is looking to build upon a solid and steady freshman year. Rider opens its regular season slate against Rutgers, which should provide a stiff test and something to build on as the momentum of the college season builds.

Picked to finish in tenth place last year, Marist surged into third place when the dust settled in the MAAC. Midfielder Hope Quinonez led the team in goals with five last year as a freshman, and with Erica Crosier back in the fold, hopes for a repeat performance are high. Staying in New York, Niagara has 18 holdovers from the 2015 squad that  managed to finish fifth overall in the regular season table and will look to make some noise once the season gets rolling.

Quinnipiac took some significant steps forward from 2014 to 2015, going from three wins to eight wins overall under head coach David Clarke. There is plenty of talent back on campus that could lead to more progress, including 2015 MAAC Rookie of the Year Nadya Gill, All-MAAC performer Jess Fontaine and rising sophomores Jess Gargan and Sarahkate Norton.

There’s an intriguing wrinkle to this year’s Mid-American Conference battle, which should be as tight and testing as ever. Last fall’s Coach of the Year Nate Norman left Western Michigan to take the head-coaching role at Liberty after winning the MAC tournaments in 2013 and 2015.

Plenty of programs will be eager to step into the void should the Broncos suffer a drop off. Ball State, Western Michigan, Buffalo, Miami (OH) and Kent State all punched above .500 and will look to patch together a solid run.

Reigning conference player of the year Jenna Hellstrom is back for her senior season, and she’s piled up the accolades in the three seasons prior. If she maintains a high level of production, Kent State certainly has a good shout of putting together another season.

Last year’s regular season champs Ball State were unable to get over the line and into the NCAA Tournament. After a great regular season, they lost in the MAC tournament on penalty kicks at the hands of Akron. There are a lot of pieces returning, with Lorina White, Leah Mattingly and Alyssa Heintschl among 16 players back from last year. White was one of the keys to the team’s defensive accomplishments of the 2015 season and she’ll seek to lead another stout back line.

Speaking of tough defenses, Buffalo faces the tough task of replacing defensive linchpin Jackie Hall. Laura Dougall’s return in goal softens the blow of Hall’s graduation, though if the team needs to be able to pick up production in other parts of the game in order to compete for honors.

Failing to muster enough offense to keep up with its own dominant defense, Miami (OH) is generally always punching towards the top of the standings in the MAC. Fives seniors are back to provide a significant amount of experience for the Redhawks, including Dana Miller and Vic Maniaci in goal. If the Ohio side can up its offensive output, there’s every reason to believe that good things are ahead.

Lauren Sinacola took over the Western Michigan head coaching role after Norman’s departure, earning a promotion from her assistant coaching job at the Broncos. That should help smooth the transition into a new staff, along with the presence of six seniors on the roster. Forward Emma Kahn is among the returnees, and she led the team with 12 goals a year ago.

The focus for the likes of Akron, Bowling Green, Northern Illinois, Ohio University and Eastern Michigan are among those seeking to make a dent in conference play, after none finishing with more than three wins in 2015.

Will the departure of do-everything midfielder Amanda Goulet and NEC First Teamer Rachel Hoekstra open the door for another team to knock Fairleigh Dickinson off the summit? FDU does return Rookie of the Year Jessi Reinhardt, though the departing talent is going to be difficult to overcome. Reinhardt will have to pick up the offensive slack for a team that scored 50 goals a year ago. A tough schedule should have the Knights prepared for the conference slate, as they’ll play seven straight games on the road, including stops against Rider, Dartmouth, Hofstra and Army.

Parity usually reigns in smaller conferences like the NEC, so if FDU can’t remain out in front, any of Robert Morris, Central Connecticut, Wagner, Bryant or even Saint Francis (PA) could like to mount a charge up the top of the table. The spine at Central Connecticut includes 2015 First Team Performers Jennifer Cafferky and Nicki Turley, lending strong credence to the notion that they could mount a title challenge.

Wagner isn’t too far from achieving success within the NEC, putting together a solid campaign in 2014 before injuries sank their hopes a year ago. Senior Megan Fritz will have a big role, while Katie Viscardi provided excellence during her freshman campaign.

Speaking of daunting schedules, Saint Francis (PA)(w) faces West Virginia on the road and tests itself on a California trip against UC Santa Barbara and Loyola Marymount. Spanish maestro Gabi Morales provides plenty of quality, though the team must improve defensively after conceding 44 goals last season.

There’s a new regime at Mount St. Mary's, as former Central Michigan assistant coach Joe Nemzer was tabbed to take over the program earlier this year. Nemzer isn’t the only new coach in town, as LIU Brooklyn(w) tabbed Scott McLaughlin back in January.