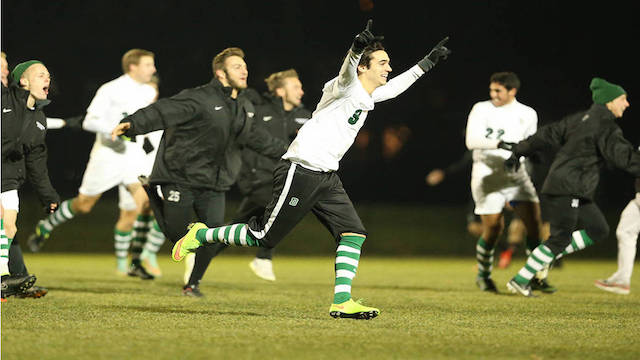 Things can change fast in the Ivy League, which is as senior-reliant across the board as any league in the country. No players are wooed to the Ivy by the sports alone, and every team is reliant on a pretty significant chunk of seniors each season. That makes dynasties - or anything resembling them - hard to come by, which is why Dartmouth’s last two years have been so impressive. They were dead last in the Ivy League in 2013 with just a single league win. Chad Riley’s engineered an impressive turnaround since then, winning 24 games in the last two years, two Ivy League titles and even bagging an NCAA tourney win in 2015 over Hartwick.

Like everyone else, the Big Green lose a quality senior class, led by Stefan Cleveland, the league’s best keeper in 2015 and the DPOY. Dartmouth should still be favored, though, and a huge reason is former New England Revolution academy member and U.S. YNT-experienced Amadou Kunateh. He might be the best player in the conference as a sophomore in 2016, and seeing him score goals for fun won’t be a surprise. Surrounded by quality like former DA contributor Matt Danilack in the midfield, Dartmouth should be favored to win a third straight, something you don’t see all that often in the topsy-turvy Ivy League.

Harvard and Brown were both right there in 2015, and both return enough talent to challenge the status quo. Jack Hagstrom has the potential to be a game-changing defender for Brown for the next three years after a breakout freshman campaign, but they’ll have to figure out how to plug in for Tariq Akeel, who’s now gone. Harvard was hit harder by graduation than anyone and lost three All-Ivy players in the offseason. There will be a lot put on junior midfielder Samuel Brown’s shoulders this year.

Princeton’s Thomas Sanner, who was so critical for the Tigers in 2015, is gone, meaning the sturdy defense led by senior Patrick Barba will have to pick up even more slack. If any team looks poised to charge up the standings, it’s Columbia. Goal-scorer Arthur Bosua is back after a first-team All-Ivy year, as is Andrew Tinari, who rules the midfield with an iron fist. This league will not lack for drama this year, that’s for certain.

LIU Brooklyn was the story of the NEC last year, even if it looked for a time leading up to the league slate that a different team from Brooklyn might win the league. St. Francis Brooklyn entered the NEC schedule with a single loss on its ledger, but it was LIU Brooklyn that role the outstanding contributions of its varied team to conference glory. In fact, LIU Brooklyn didn’t lose a single league game last year, running the table in the regular season and in the conference tournament. It took a penalty loss to Rutgers to knock them out of the NCAA tourney.

It isn’t as though LIU Brooklyn loses nobody, but there are a lot of quality players back. The unbelievably productive Scandinavian freshman tandem of Simen Hestnes and Rasmus Hansen is back for their second crack, and the team added a player with USYNT experience in freshman Giuseppe Barone. Can LIU Brooklyn run the table for a second consecutive year? Don’t count them out.

Saint Francis (PA) looks as good as advertised in 2016. Francis de Vries is the best player in the conference without a shadow of question, leading the back line with an iron fist. The explosive entrance of now sophomore forward Mario Mastrangelo in 2015 should carry over nicely as Saint Francis looks to break LIU Brooklyn’s deadlock. In truth, those two will probably be battling it out for the title again.

St. Francis Brooklyn was tremendous until the stretch run last year, and the loss of three first-team All-NEC players will be tough to replace this quickly. Vincent Bezecourt will have to mature quickly. Robert Morris intrepidly enters the post-Neco Brett era after Brett won his unprecedented third NEC Player of the Year honor in 2015. He papered over a fair amount of cracks in his four years as one of the most prolific scorers in NCAA history. Even with quality elsewhere, it’ll be impossible for Robert Morris not to take a small step back in his absence.

American has claimed some impressive wins the last two years with its current setup, including a massive upset over No. 1 UCLA in 2014 before the Bruins made the NCAA title game later that year. After American started 2015 with five consecutive wins most assumed the Eagles would rule the roost again this year, but the league’s unholy depth had something to say about that. Colgate closed the year on a 4-1 run to win the regular season crown. And yet neither made the tourney. Boston got in as an at-large and Lehigh won the league tourney.

The fact that four teams won double digit games in 2015 illustrates just how deep and unpredictable this league can be. What’s more, all four of the league’s award-winners from 2015 are back, so the league will have a familiar look in 2016. Boston returns more talent than anyone, and it’d be a surprise to see the Terriers shut out of both regular season and conference tourney titles again. With players like Magnus Benediktsson, Matt Gilbert, David Asbjornsson, Felix De Bona and Anthony Viteri, nobody can match their talent level.

American, Lehigh and Colgate will certainly try as the closest challengers. American loses some good seniors, but the midfield partnership of Panos Nakhid and Dale Ludwig should carry them through another 10-plus win season. Lehigh’s charmed 2015 season culminated in the NCAA tourney, a task they might find tough to repeat given how much talent is here. Justin Worley is among the best returning defenders in the league and will anchor what should be a stout back line again.

Navy should be an interesting team to monitor given the Midshipmen just hired their sixth coach in 95 years as a program. They weren’t bad in 2015, and the addition of former UConn assistant Tim O’Donohue as the leader should shake up the league and add a team that could play more through the midfield. With Army, Bucknell and Holy Cross all angling to make the top half of the league, the Patriot League should retain its reputation as one of the deepest in the nation.