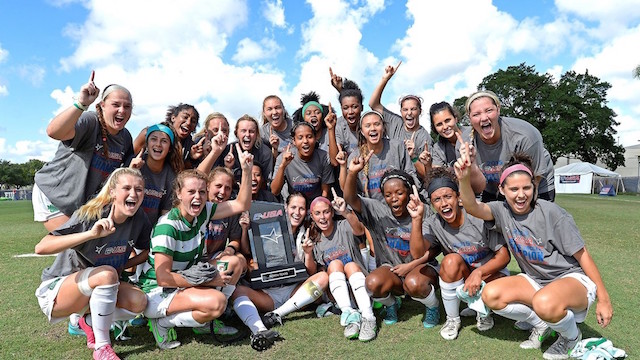 The CAA was a quality league in 2015, and the rest of the country got a taste of what one of the best mid-majors in the country had to offer in the NCAA tourney. The conference put all four of its top teams in the Big Dance: conference tourney champ James Madison, William & Mary, Hofstra and UNC Wilmington. What’s more, the latter three all advanced to the second round, and William & Mary put a pair of goals past Florida.

This season, the top of the league shouldn’t be all that different than it was in 2015. William & Mary lost prized goalkeeper Caroline Casey to the NWSL Draft, but the returning spine is the best in the CAA. Defender Clara Logsdon might be the best in the league, while midfielder Rachel Moore will run the show in the middle.  If any team looks poised to come for the regular season crown Hofstra and W&M shared last season, it’s James Madison. The Dukes have probably the conference’s best returning player in senior forward Ashley Herndon, who will pair with midfielder Allie Bunner to make one heck of a combination. The coaches picked James Madison to finish behind William & Mary this year, but that race is probably too close to call.

Don’t forget Hofstra, which is bouncing off a 13-win 2015. The question is how they cope with the loss of 2016 NWSL draft pick Leah Galton, the league’s best player last season. The goals will have to come from elsewhere, and it’s not immediately clear who picks up the slack. The return of midfielder Jill Mulholland should smooth the transition and put Hofstra right back in the thick of the race.

Northeastern finished in the middle of the pack last season and will have an old face in a new spot on the sideline. Former assistant Ashley Phillips was named the Huskies non-interim head coach in March, and her influence on the team’s record-setting defense from 2014 won’t be forgotten. Their defense will be stout again with Mackenzie Dowd leading the way and Hannah Lopiccolo in the midfield. The question is if they can score enough behind Kayla Cappuzzo to compete with the title contenders.

UNC Wilmington, an NCAA tourney team in 2015, lost a raft of contributors off its 15-win team from a year ago. There will be a lot asked of senior keeper Carolyn Huddy, who’s probably the best returning backstop in the league.

The conference dark horse could well be Drexel. They finished at .500 last year and were young at a few key spots, but they found a talisman to build around in utility threat Vanessa Kara. She was the league’s top newcomer in 2015 and will give the side a focal point in the coming years. Delaware will also be dangerous this season with the return of senior forward Natalie Zelenky, and the Blue Hens should be a headache of a road trip for just about everybody.

Conference USA clocks in at a whopping 14 teams, which makes it one of the most unpredictible and continually shifting leagues in the country. You’re never quite sure what you’re going to get, which makes dynastic runs all the more difficult when you aren’t certain about dark horses. That makes what North Texas has done all the more impressive. The Mean Green were the league’s best in both the regular season and in the conference tourney, earning an NCAA date with Texas Tech they barely lost in a 1-0  squeaker.

North Texas was not immune to graduations, but they’re the presumptive favorite to retain the crown - one if not both - because of what’s back. That, of course, begins with the galactic talent of senior forward Rachel Holden. North Texas has the rare honor of starting a two-time league player of the year up top, and she’s about as hard to corral as it gets in women’s college soccer. North Texas has a fight on its hands with the likes of Rice, FAU and Marshall on its back, but on paper nobody looks better.

Rice has been an emergent power in recent years, leading many to wonder when the breakthrough will come. It could be 2016, as senior defenders Jenny Fichera and Jasmine Isokpunwu form the backbone for the best back line in the league. If Rice can find a way to manufacture goals without Lauren Hughes, they’ll be golden. Marshall should also be a scary matchup with Sydney Arnold running the show in the middle, while FAU’s defense is up there with Rice. It doesn’t get any better than keeper Sydney Drinkwater, the anchor of what should be a another 10-plus win team.

The question, as always, is where the challengers come from from outside the traditionally held favorites. Charlotte, Old Dominion and Middle Tennessee all look up for the challenge. If Old Dominion can put some pieces in place next to returning freshman of the year Iris Achterhof, they could mount a rise. Charlotte might be best placed with the return of midfield maestro Martha Thomas, who earned a selection to the Preseason All-CUSA Team.

Louisiana Tech and Western Kentucky both recorded winning records both in the league and overall last year, and it wouldn't be a surprise to see both take appreciable steps forward with seasoned crews in 2016. The same could be said of UTEP, which boasts returning defensive leader and former Midway High School all-state performer Aleah Davis.