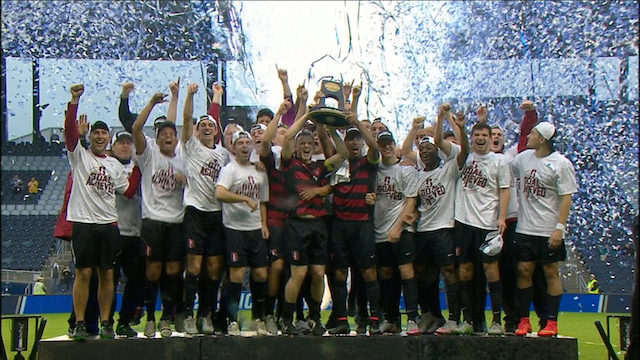 Any time a conference returns a defending national champion, the rest of the league stands a little bit more at attention as the season gets underway. That’s the landscape in 2016 as the Pac-12 prepares to kick off a year in which everyone guns for Stanford’s crown. The Cardinal were basically unchallenged in the Pac-12 in 2015, winning the league over UCLA by a whopping seven points and winning seven of its 10 conference matches.

That was only prelude to the real show. Behind the contribution of Jordan Morris, Stanford won its first ever men’s soccer national title to cap a 2015 no one will soon forget. It was the Pac-12’s first national title since UCLA’s last in 2002, and it reasserted the league as a serious player come College Cup time outside just the Bruins.

Stanford, though, might struggle to get back to those heights. A whole raft of talent is gone, including Morris, probably the most game-changing college talent of his generation. The Cardinal also lost Brandon Vincent to MLS, and the fact that both are having Rookie of the Year-type campaigns tells you how good Stanford was last year. The Cardinal do bring back a good deal of talent, although most of it is all concentrated toward the back. Keeper Andrew Epstein is the league’s best, while it wouldn’t be a surprise to see defender Tomas Hilliard-Arce plucked for a Generation adidas contract come December. This will be midfield creator Corey Baird’s team in 2016. As he goes, so go the Cardinal.

With all its losses, it perhaps shouldn’t be a total shock then to see UCLA as the presumptive favorite to return to the Pac-12 summit. The Bruins were in a national title game just two years ago, and they struggled somewhat to recapture that magic in 2015 without Leo Stolz. But after a brief NCAA run last year it certainly looks as though the Bruins are reloaded for a quality season.

UCLA had its typical pre-freshman class defections to the pro ranks, notably McKinze Gaines (Wolfsburg) and Hugo Arellano (LA Galaxy II), but nobody weathers those storms quite like the Bruins. They have another huge class incoming, including top Freshman of the Year candidate Reggie Cannon fresh off a U18 Development Academy title with FC Dallas. That’ll only add to a ridiculously talented roster headlined by certain future pro and national player of the year frontrunner Abu Danladi as well as Seyi Adekoya, Michael Amick and mega-talented sophomore creator Jose Hernandez. Whether or not UCLA can compete for its first national title in 14 years is one thing, but they’ll be favored to return to the Pac-12 throne at the very least.

Since Washington won the league in 2013, the question’s been which of the non-UCLA/Stanford hegemony will break through and take steps forward. The Huskies, for their part, have an immense incoming class headlined by USYNT vet and Real Salt Lake forward Elijah Rice. He can be a game-changer right away, and so too can Colorado native Jaret Townsend, a tricky dribbler with pace for days. The progression of Henry Wingo might be the most interesting facet of Washington’s season. Jamie Clark’s teams are always sound at the back, but if the influx of attacking talent can make its mark, Washington shouldn’t have any trouble at least finishing third.

Cal could have something to say about that when it’s all said and done. Most any team in the country would kill to have a forward with the productivity of a Christian Thierjung, who enters his senior year as dangerous a threat as ever. With Nick Lima anchoring the back line and keeper Jonathan Klinsmann hopefully taking steps forward in his sophomore year, Cal should be tough to break down. Meanwhile, keep a keen eye trained on No. 10 Jose Carrera-Garcia. The mazy 5-foot-6 dribble king enters his junior year as one of the hardest players to mark in the country, and an explosive season could be just the thing Cal needs to turn some heads and crash into the NCAA tourney.

Oregon State continues to attract quality talent, and despite the 11th hour recruiting loss of dynamic midfielder Christian Lucatero before the 2015 season, the Beavers have plenty of reason for optimism in 2016. That all starts with Timmy Mueller, unquestionably one of the most formidable hold-up strikers in the country. He has 17 goals in his college career to this point, and the 6-foot-3 junior will more or less dictate how successful the Beavers are in 2016. His supporting cast is obviously of clear importance, and players like Jalen Markey and Davis Chimento will have important roles in keeping the back sturdy.

San Diego State will be Oregon State’s biggest competition to stay out of the league cellar in 2016, and the race should be a pretty tight one. SDSU is the only team in the conference not to land a player on the Preseason All-Pac-12 Team, although this might be one of the more talented Aztec teams we’ve seen in a while. They notched an 8-9-1 mark last season, their best record in four years, and they return a whopping nine starters from that team. Keep an eye peeled for Jeroen Meefout, the team’s forward general and its key contributor in 2016. The Dutch-bred scorer and Maryland transfer should have a big senior year after going for four goals and three assists a year ago. If the pieces fall into place elsewhere, the Aztecs could easily be looking at a winning season.