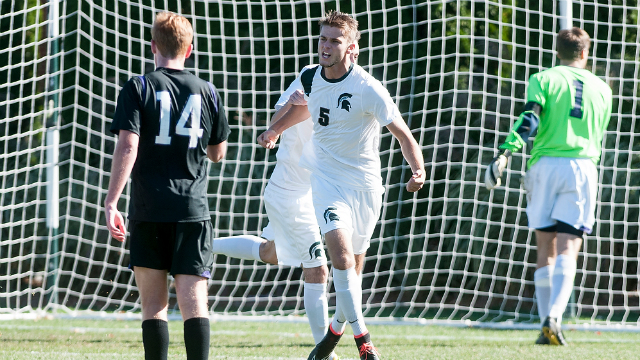 As games kick off across the nation at the Division I level, MLS scouts will also slowly matriculate to random fields on campuses, looking for the diamond in the rough to add to next season’s roster.

Below are 15 names to keep an eye on this season as players seek to improve their draft stock.

Senior candidates
M Patrick Hodan, Notre Dame - For the most part, Notre Dame has served as a better developing ground than most pro clubs in the United States. That’s just one of several reasons Hodan is arguably the top senior prospect in this year’s draft. Capable of playing out wide or underneath a target striker, Hodan has shown the ability to both score and create. The Wisconsin native has posted a solid 26 goals and 13 assists in his three college seasons so far.

D Brandon Vincent, Stanford - Vincent has developed into the best left back in college soccer. The former center back could have options in Europe as well, but an enticing offer from MLS could keep the leading scorer for Stanford in 2014 in the States. Vincent offers an MLS team a good 1v1 defender as well as a player who consistently makes the right decision on the ball. He might not be an early pick in the draft, but he could be a long-time contributor to the right team.

D Jonathan Campbell, North Carolina - Overshadowed over the past few seasons by center back partner O.C. Okwuonu, Campbell has been a starter since the first day of his college career back since 2012. This year is an opportunity for the 6-foot-2 center back to prove that he’s an elite defender capable of making the transition to the next level.

F Michael Gamble, Wake Forest - Gamble is the type of player that does not fit the mold of a prototypical MLS player. He is undersized at 5-7 for a (domestic) forward in the league. However, he is one of the smartest players in college soccer, which could catch the eye of a scout or two.

M James Moberg, Washington - The Huskies’ style has fluctuated under coach Jamie Clark depending on the talent at hand. With Moberg in the middle, though, Washington can be a bit less direct thanks to his technical ability and vision as a box-to-box midfielder. Moberg isn’t the type to unzip defenses from underneath the strikers, but he sees the entire field and provides another dimension tracking back. MLS talent evaluators place a lot of credence on two-way midfielders, and Moberg is among the best available in the past few years.

GK Zach Bennett, Michigan State - The Texas netminder is the obvious choice when debating who some of the top shot-stoppers are in the college season. He ticks a lot of the boxes that coaches look for, whether it’s his size (listed at 6-foot-3), reflexes, distribution and command of the area.

M Mael Corboz, Maryland - Given his ties to the New York Red Bulls, Corboz could end up signing directly with the club. But should that not happen, the central midfielder is one of the best in his position in this year’s senior class, a quality ball-playing mid who takes a set piece better than a number of players in the professional ranks.

D Zachary Carroll, Michigan State - Solid and steady at the back, Carroll thrived after a transfer to the Spartans ahead of 2014. The senior central back needs to show that he can compliment his quality on the ball with the physical traits that MLS scouts search for when evaluating talent.

F Neco Brett, Robert Morris - Speed and finishing are valued traits in Major League Soccer and it’s two things that Brett has brought to the table over the past two seasons at Robert Morris, scoring 29 goals in 39 appearances. The Jamaican will obviously need to show the same consistency in the upcoming campaign to stay atop the draft board, though he’ll be help by a relatively weak forward class.

F John Manga, Cincinnati - What if we told you Cyle Larin didn’t lead the AAC in goals in 2014? That honor belonged to Manga, who led the league in tallies (10) and points (22) as a junior. The strapping 6-foot-2 forward has a prototypical build for the next level, which should help him contribute as a hold-up striker right away, either for a senior team or in the USL. Manga’s visibility has most likely been hurt by the fact that he doesn’t play for a traditional power, which hasn’t allowed him to showcase in the NCAA tournament. But he’s still a live-wire talent who could easily go in the first round.

Generation adidas candidates
D Joshua Yaro, Georgetown - Yaro graduates this December after what will be his third season on the Hilltop and is arguably the best player in college soccer. The dynamic defender can shut down the best attackers in the league with his speed and athleticism, while he’s a tidy enough player on the ball in the Hoyas’ possession-based approach.

F Abu Danladi, UCLA - The most prolific forward in Division I is one of the most coveted talents in recent memory from the college game. It’s not a forgone conclusion that Danladi will leave UCLA for MLS, but he would change the outlook of a franchise if he did decide to sign a Generation adidas deal. He is as talented as they come in college soccer and worth the price of admission on any given day.

M Tanner Thompson, Indiana - While his brother Tommy has endured ups-and-downs since leaving Bloomington early, Tanner has thrived and flourished as a creative midfield option for the Hoosiers. A big season in the Big 10 would certainly catch the eye of scouts as he’ll need to showcase his skills on both sides of the ball in order to force his way high atop the GA list.

F Geoffrey Acheampong, UC Santa Barbara - The UCSB freshman attacker drew interest from MLS clubs prior to his arrival in the college game. The Right to Dream graduate had a prolific high school career at Cate School. His arrival with the Gauchos is expected to change the outlook of the team thanks to his dynamic ability to beat his defender on the dribble as well as one of the best left foots in college soccer.

M Jake Rozhansky, Virginia - The energetic and talented central midfielder worked his way into the lineup for the national champions, making 21 starts and appearing in 23 games overall in the team’s title-winning campaign. His potential to be one of the nation’s most exciting talents was somewhat blunted by Virginia’s somewhat dour approach offensively. An energetic runner able to spot a pass in the final third, he’s one to watch in Charlottesville this season.