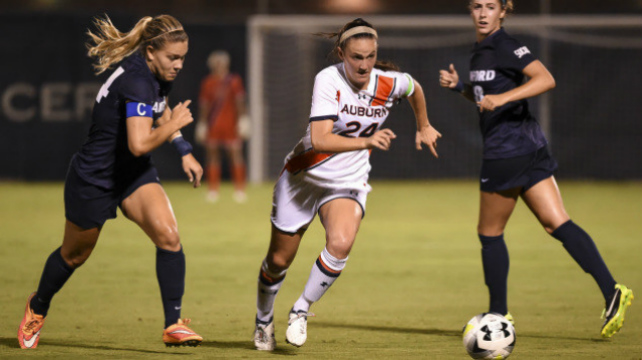 The perennial SEC favorites will once again look to hold off a talented field of competition. Offense is sure to be the team’s primary strength, with Savannah Jordan now a senior and Gabby Seiler, who redshirted last season after transferring from Georgia, can unlock the defenses. The one area where the Gators will need to address is its back line after losing starters Claire Faulknor and Christen Westphal to the pro ranks.

Since joining the SEC along with A&M, the Tigers generally find a way to stay competitive and finish near the top of the standings. There are some holes for this team to fill, though returners like Melanie Donaldson, Kaitlyn Clark and Reagan Russell make this Missouri team a dangerous opponent to conted with all season long.

After another stellar season in Auburn, the momentum should only continue to flourish. Midfield duo of Brooke and Casie Ramsier provide quality in the middle of the field, bolstered by Welsh mid Ellie Leek. Provided Sarah Le Beau can maintain the high level she showed in goal last season, Auburn is in good shape for another SEC run.

Any team that welcomes back a trio of its highest scorers has to like its chances for another quality campaign. CeCe Kizer, Addie Forbus and Gretchen Harknett combined to score 30 goals in 2015, and all will return to the lineup to trouble the opposition all season long.

A tough and experienced offense provides a lift to the Gamecocks, which have also been a consistent presence at the top half of the SEC table. Savannah McCaskill continues to blossom up front with the support of senior Sophie Groff and sophomore Simone Wark.

A young roster made it all the way to the Elite Eight in 2015, and there are plenty of weapons primed for another deep run. Mikaela Harvey declined to skip the college season for a spot on the U20 World Cup team, and the graceful and elegant attacking midfielder is one of the nation’s best. Ally Watt is expected to make the team, which would remove one of the weapons from the team’s stable of athletic front-runners. Haley Pounds and Emily Bates are certainly good enough to help the team cope with Watt’s absence, while midfielder Stephanie Malherbe’s experience with South Africa at the Olympics will add an encouraging element to the squad.

Another SEC team, another program loaded with some dynamic attacking weapons. In the case of LSU, Joran Baucom and Summer Clarke are the two prolific names that earned All-SEC honors in the 2015 season, and are talented enough to trouble the best defenses. Megan Lee, Jordane Carvery and Alex Thomas bring experience and talent to the back line. If all goes well, the ceiling is high and LSU could be on the brink of another good season.

Year two under Darren Ambrose begins for Vanderbilt, and it appears that scoring sensation Simone Charley could potentially be redshirting this fall, according to the team’s roster. Losing the Second Team All-SEC performer is a definite blow, though Ambrose has certainly provided a nice lift in his first season with the team. Lydia Simmons is one of the returnees that would need to step up significantly and make a bigger impression if Charley indeed misses the upcoming season.

Head coach Brian Pensky has consistently proven himself as a recruiter of top talent on a regular basis, though the on the field results have been hit or miss. This season comes with the caveat that Katie Cousins will be unavailable in the midfield because of U20 World Cup duty, though Carlyn Baldwin certainly helps soften that blow. Maya Neal is a newcomer to keep an eye on after redshirting the 2015 campaign, while Hannah Wilkinson is finally set to play her final year of eligibility after tearing her ACL. The Kiwi forward staying healthy is critical as the Volunteers seek to climb the standings.

Turnover and injuries has hit Kentucky pretty hard over the past seasons, as the Wildcats couldn't make a return to the NCAA Tournament after enjoying a tremendous 2014 season. Experienced hands such as Katy Keen, Zoe Swift and Tanya Samarzich bring veteran leadership to the group, though there's little doubt that the Wildcats will skew a little younger in the new season. Imcoming talent like Marica Bosco and goalkeeper Evangeline Soucie are likely to play big roles, and how the younger group adapts to college soccer will go a long way in dictating how successful the season will be.

After going from zero SEC wins in 2014 to three last season, Mississippi State seeks to continue its momentum ahead of another campaign. It wouldn’t be surprising to see the SEC wins ratchet up a notch as well, though the Bulldogs are still a tad young – just three seniors on the current roster – the experience the youngsters are picking up will prove vital late in the year, if not sooner.

The lack of a goal-scoring punched proved costly for the Bulldogs, which also struggled with a 1-5-1 non-conference record. Improving in both departments is the starting point for the upcoming campaign. There is some intriguing talent in Athens, including senior forward Marion Crowder, junior midfielder Rebecca Rasmussen and goalkeeper Louise Hogrell.

Injuries threw the 2015 season off the rails for the Razorbacks, as they slipped down the SEC standings after punching their ticket to the NCAA Tournament the year prior. This year’s roster includes the addition of defender Petra Smetkova (Czech Republic), a seasoned European player, while leading scorer Claire Kelly is back for her senior season.

The Crimson Tide should but among a handful of teams that finished at or near the bottom of the SEC that fare much better in the season ahead. An offense should see improvement with Lacey Clarida, Christina Martensson and Abbie Boswell, while Spanish national team player Celia Jimenez Delgado will be a key part of the team's surge this season.