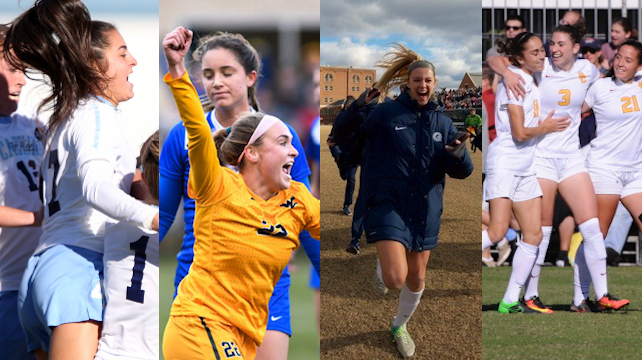 The 2016 Women’s College Cup kicks off on Friday afternoon at Avaya Stadium in San Jose, California. The Final Four event will be broadcast live on ESPNU, and TopDrawerSoccer will have exclusive content from the semifinal and final round of the tournament. Below is the preview of the semifinal games.

West Virginia is the only No. 1 seed left in the running for the championship. The Mountaineers defeated Duke 1-0 in the Elite Eight game. It was the 17th shutout of the season for West Virginia, which is good for fifth best in NCAA Division I. The Big 12 side has only let in one goal through the postseason, which came in a 1-1 result against UCLA. With only nine goals conceded this season, West Virginia ranks second best in Division I in goals-against average. Defender Kadeisha Buchanan has been the star of the show. Buchanan, a Canada Women’s National Team regular, has played in 23 games this season and 89 during her career.

North Carolina defeated South Carolina 1-0 in the Elite Eight last week. Madison Schultz and Lindsey Harris were the stars of the show from that game. Schultz has five game-winning goals in the last eight Tar Heels games. Harris made eight saves in the game including one on a penalty kick. This is the 27th time North Carolina has advanced to the semifinal round of the NCAA Tournament in 35 attempts. This is West Virginia’s first appearance in the College Cup.

Friday’s game is shaping up to be a grind it out affair with both teams coming from a more defensive approach. The Mountaineers have Buchanan, which could make all the difference in a game that is going to be very close. The Tar Heels have some quality players, especially in the freshman class, who could make this interesting if they can find a goal in the first half.

Let’s call this game the palate cleanser after the opener on Friday. While West Virginia-UNC figures to be a street brawl, USC against Georgetown should be a fascinating chess match. The finesse and flair of each team helped get them to the College Cup, and neither coaching staff will stray for their identity. USC head coach Keidane McAlpine is close to a miracle worker. He improves every program that he influences. In his third season with USC, McAlpine has USC in its second College Cup in program history. USC was first in the Final Four in 2007 when the Ladies of Troy won it all and became the first Pac-12 team to capture the National Championship in Women’s Soccer.

Repeating that feat will be a tall task this weekend. USC first squares up against the Georgetown. The Hoyas advanced to their first College Cup with a 1-0 win over Santa Clara in the Elite Eight. Head coach Dave Nolan’s group has been doing the business in the NCAA Tournament with four shutouts in a row to get to College Cup. The Hoyas are not a defensive team though. The Big East program controls the game with possession, which should make this one a fascinating midfield battle between Rachel Corboz and Morgan Andrews, both MAC Hermann Trophy Semifinalist. USC also packs some punch in Mandy Freeman, Kayla Mills, and Ally Prisock, who have all been excellent this season. Leah Pruitt is the player to watch off the bench for USC. The high engine and constant pressure from the attack could create some dangerous turnovers. The Hoyas’ attack has been stellar throughout the season with Grace Damaska, Crystal Thomas, Amanda Carolan, and Caitlin Farrell all joining Corboz with terrific campaigns. An early goal from either side could really open this game up.