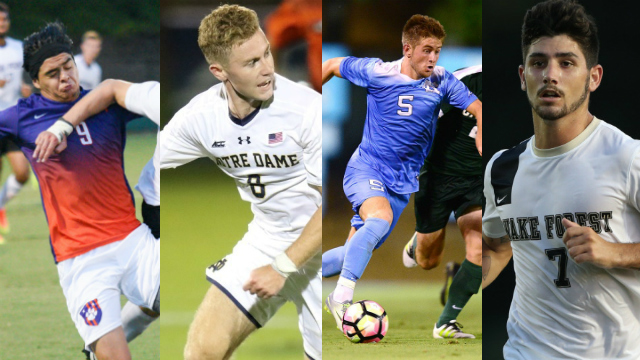 The ever-competitive ACC should only improve in the coming season, as the programs on the bottom work to get better while the top dogs continue to draw in top talent.

National runners up in 2016, Wake Forest must retool its midfield to keep itself near the top of the heap. Losing two players of the caliber and quality of Ian Harkes and Jacori Hayes is no easy task. Bradley Dunwell brings continuity and plenty of ability of his own, while Steven Echevarria and Bruno Lapa are other options to compete in the middle. Spanish senior Jon Bakero’s ability in the final third will also be a big piece of the team’s upcoming season. The incoming class is of a high level, with FC Dallas midfielder Brandon Servania likely able to provide an impact in the wake of the loss of Harkes and Hayes. Machop Chol is another player to watch in the final third, Mark McKenzie a potential starter at outside back as a freshman and Omir Fernandez a spark off the bench.

If Wake is slow out of the gate, North Carolina is primed and ready to contend in the ACC and beyond. The Tar Heels have their own pieces to replace, though they bring in a high level in both with their recruits and returning players. Midfielder Cameron Lindley is arguably the best player in the country and will boss the center of the park in the ACC. Fellow Chicago Fire alum Mauricio Pineda should have another big season. Newcomers Alex Rose, Lucas del Rosario and John Nelson are just three of UNC’s big class that should see big minutes, as UNC seeks a return trip to the College Cup.

Louisville brings back a plethora of talent, including stalwart outside back Tim Kubel, dominant attacking force Mohamew Thiaw and midfielder Geoffrey Dee. The Cardinals are always a tough team to beat under head coach Ken Lolla, and their ability to compete at the top will be determined how players like Tate Schmitt continue to develop, and how quickly newcomers such as Elijah Amo and Izaiah Jennings adjust to the collegiate level.

Trending consistently upwards under head coach Mike Noonan, Clemson is in line for yet another quality season. There’s a slew of holdovers from the 2016 squad that bring back experience and ability. Diego Campos, Saul Chinchilla and Oliver Shannon are three of their key seniors that will provide leadership, along with incoming transfer Jason Wright. The addition of the former Rutgers star could be a huge addition if he proves capable of beating ACC defenses. The Tigers’ back line is also expected to be formidable, with Malick Mbaye, Patrick Bunk-Andersen and Tanner Dietrich also among the returning contributors.

A handful of early departures and incoming transfers gives Virginia a new look in 2017. Edward Opoku and Pablo Aguilar will pull strings in the final third, while Jean-Christophe Koffi seeks to build on his strong season a year ago. Goalkeeper Jefferson Caldwell is one of the best in his position, and Spanish center back Sergi Nus provides a calming presence at the back. If the Virginia becomes a bit more ambitious in the final third, the framework for an excellent season is there.

Bobby Clark-coached sides can never be counted out, and the experience of Notre Dame’s head coach combined with the quality of player they bring in, keeps them extremely competitive. Senior forward Jon Gallagher will look to stake a claim as the nation’s best forward, coming off earning ACC Offensive Player of the Year in 2016. Tommy McCabe returns as a midfield general, and Jeffrey Farina is healthy, seeking to form a lethal combination up top with Gallagher.

Like Clemson, Syracuse has managed to keep itself towards the upper echelon of the ACC. This year produces yet another test of that, after the loss of a handful of key pieces. Miles Robinson and Chris Nanco were All-ACC First Team performers that moved on to the pro ranks, while Sergio Camargo and Oyvind Alseth are also rostered on the next level. Defense was a pillar of strength for the Orange a year ago, conceding just 12 goals all season. Goalkeeper Hendrik Hilpert remains to lead the charge there once again.

Sleepers are hard to come by in the ACC, though Boston College certainly has potential. The team lost its dynamic sparkplug in Zeiko Lewis, though the returning players are notable: midfielder Lasse Lehmann is a quality sophomore, All-ACC defender Len Zeugner returns after missing 2016 with an injury and Simon Enstrom will lead the attack. Defensive improvement is vital towards the Eagles living up to their potential, as they conceded more goals than they scored last year.

Another sleeper team from last year that proved it on the field, Virginia Tech’s dream run saw the Hokies come one game shy of the College Cup. Two reasons that the team could surprise again – Ben Lundgaard is one of the best goalkeepers in the country and Costa Rican forward Marcelo Acuna, a Second Team All-ACC performer a year ago.

Seeking a return to the NCAA Tournament for the first time in 2011, Duke continues to put together intriguing, talented recruiting classes and struggling to get the results. Senior midfielder Brian White is in the form of his life, after dominating the USL PDL season, finishing as the top scorer and earning MVP honors. White is one of a nine player senior class that surely wants to rectify that.

The two rebuilding sides in the conference can’t be overlooked. Jay Vidovich enters his second campaign with Pittsburgh, and things are already trending positive. Montverde superstar Kizza Edward is among the newcomers, a raw yet exciting talent that brings goals and guile to the Panthers. Goals are what Pitt needs to improve, as they managed just 10 last season, loving eight games by a one-goal margin. Flip some of those results into draws or wins and the Panthers are going to continue to get better.

The lone ACC side with a new coaching staff, George Kiefer’s now in charge at NC State and looking to build a competitive group right away. There’s experience here to help the Wolfpack grab a few wins in the ACC and compete for an NCAA Tournament spot. That includes midfielder Julius Duchscherer, who led the team with nine goals last year. The new coaching staff has quickly improved the recruiting class; keep an eye on David Loera and Manny Perez.