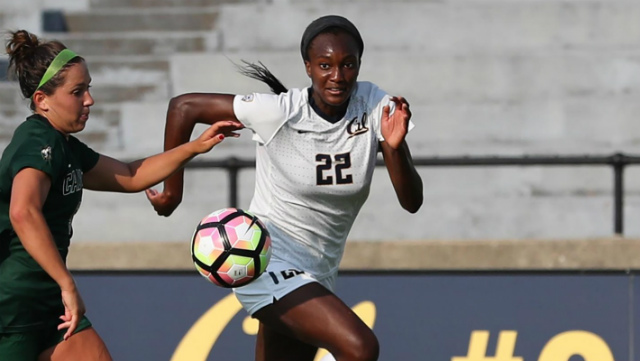 The best players in women's college soccer are eagerly awaiting this week's NWSL Draft, hoping to hear their name called in Los Angeles.

Continue the rankings of Top 40 prospects below.

A solid central midfielder and supply line to Savannah McCaskill, Drennan’s a quality option in the middle of the park facing similar questions as others in the draft. A hard-working player that can use both feet well and cover ground, she can cover an impressive amount of ground. Finding the right fit is critical to her success – whether or not she can do the same job as a No. 6 or 8 (her likely spot) will dictate her success. Finishing a college career with 40 assists isn’t too shabby, of course, and she’ll end up coming off the board at some point.

Duke’s dynamic winger is a prospect with the kind of pace and speed that can open things up in wide areas. However, when space in behind the back line is taken away, she can become a bit one-dimensional. She’s got enough in the final third that should see her come off the board in the second or third round, especially if it’s a team looking for an attacking substitute. And, it's a risk that could end up paying off if Payne can continue to improve with her combination play and passing.

The 2012 Pac-12 Freshman of the Year has come a long way, and had ups and downs getting to this point. A leg injury knocked her out of the 2014 season, though she bounced back as a senior in a big way after going through ups and downs in 2015. Capable of stretching back lines with pure pace, Onumonu’s health is key to her success at the next level. Her ability to get in behind and separate from defenders should translate into an impressive attacking force.

A central defender that could end up sneaking onto a roster, McNabb’s been a good collegiate player the past four seasons at Virginia. Her left-footedness could end up providing an opportunity as a left back, and her pedigree is impressive. A calm and composed defender that possesses decent athleticism, given Virginia’s possession style, she’ll need to showcase the ability to keep up with NWSL attacks in order to truly make an impression in the league.

The Scarlet Knights have shown the ability to prepare defenders for the next level, and Smith’s been a big part of the team’s success over the past two years. A hard-nosed right back that’s capable of hanging with the physical demands of the league, Smith’s engine would be an asset to teams looking to bolster its back line.

The tough and tenacious defender from the Golden Gophers is a shutdown defender that can solve problems with her athleticism and soccer IQ. Her ability on the ball is perhaps the only thing that stands between her and a spot on an NWSL team. If she cleans that up, she has the aggression, determination and knowhow to anchor things centrally, especially in the right system.

One of the draft’s more intriguing talents, Mimi Rangel hails from an under-the-radar Lon Beach State side that won the Big West title last fall. A tenacious attacking player that offers versatility, she’s played a number of spots and can make an impact with her movement and late runs into the box.

It’s no doubt been a tremendous Ivy League career for Purce, three times winning the Ivy League Players of the Year, and a first teamer all four seasons in Cambridge. She’s accomplished this off the back of her dynamism and ability to beat defenders with her pace and athleticism. Whether or not that’s enough to success in the NWSL keeps her a bit lower on the draft board, as she seems to be a boom or bust type player.

A late addition to the draft pool, Kolander picked up an injury in Minnesota’s final game of 2016. Her body of work the past two seasons indicates a player on the rise, posting double digit goal totals for one of the Big Ten’s most underrated teams. She ticks the boxes in terms of the athleticism, though she needed numerous chances to score at the collegiate level and struggles technically at times.

The Canadian youth national team veteran enjoyed a career-best senior season, scoring 10 times and adding eight assists, all while drawing the focus from opposing defenses. A smart, athletic forward that has a high soccer IQ, she’s a player that could end up making a sneaky impact in the right situation. Along with that, she’s also a U.S. citizen and wouldn’t occupy an international slot.