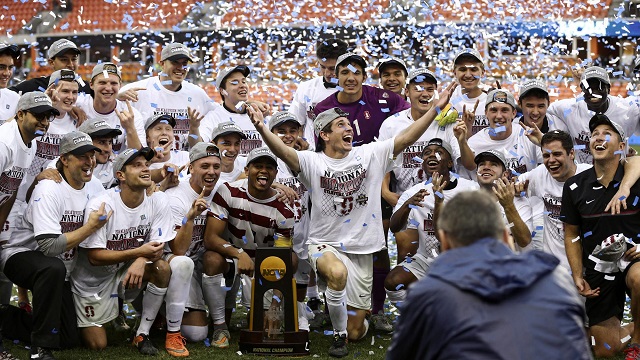 The Pac-12’s small size has only been eclipsed in recent years by its potency come December. Stanford, never a traditional men’s power, rose not only to regional but national notoriety by winning its second consecutive national title in 2016. Anyone who thought the Cardinal were poised to take a step back in 2016 were sorely mistaken, and the rest of the conference simply had to keep pace.

Believe it or not, Stanford actually lost less off its 2016 team than the national title-winning team from the offseason before. The defense had a bit of a shakeup with the loss of Brian Nana-Sinkam to MLS and keeper Andrew Epstein to the Peace Corps, but the return of Tomas Hilliard-Arce, one of the nation’s best all-around defenders, should stabilize things. The entire attacking corps is back too, and names like Corey Baird and Foster Langsdorf, who actually outscored Jordan Morris’ 2015 total, should scare everybody. The Cardinal enter the season with a five and a half game shutout streak, including the entirety of the 2016 postseason. And the freshman class might be the nation’s best. Go figure.

The question isn’t so much whether Stanford is the Pac-12 favorite. It’s whether the Cardinal are the most talented team in the country. Its returning sophomores and juniors have only ever ended a season with a national title win.

UCLA was picked to finish second in the conference, but that might’ve been a vote by default since the Pac-12 looks to be in a down year in 2017. The Bruins were absolutely pillaged by MLS in the offseason, losing half the starting roster from their final game and a ton of key non-senior contributors to Generation adidas and Homegrown deals. UCLA will be competitive in most its games, but there are two seniors on the entire roster. One, tricky midfielder Brian Iloski, will likely be asked to do a lot. However the Bruins come out, this team undoubtedly lacks the star power of its best teams and will likely have an uphill climb to qualify for the NCAA tournament.

Washington is the other recent contender, and a couple encouraging NCAA runs in recent years imbued this team with some vital experience. In reality, the Huskies are the second-most talented team in the conference behind only Stanford, and the return of Sounders academy stud Handwalla Bwana gives them a rare attacking talent in the college game and hope of playing into December. The defense again is in good shape, as it always seems to be under coach Jamie Clark, and if the attack rounds into form this is a no-doubt NCAA team. The striker tandem of Elijah Rice and Kyle Coffee is one of the nation’s best.

The conference’s bottom three could surprise some folks, but at least on paper none look capable of breaking into the top half of the Pac-12 by season’s end.

San Diego State was the pleasant surprise of the conference after finishing in the cellar each of the previous two years. The Aztecs’ recruiting apparatus scored an enormous win last year in Pablo Pelaez, and his return for his sophomore season gives San Diego State one of the more exciting players in the college game. He’ll have to do a lot of heavy lifting this season to push the Aztecs back toward the top.

Oregon State, which finished a tight fifth last year right behind San Diego State, struggled at times to replace the rip-roaring creativity void left by Khiry Shelton, who went in the draft to NYCFC. As a result, No. 9 Timmy Mueller’s output suffered somewhat last year and he had the lowest scoring output of his college career to date. Mueller has one more year to try and drag the Beavers into the NCAA tourney, but the question of who can be the primary creative outlet is largely unanswered.

California fell on hard times in 2016. The Golden Bears’ five-win season was their worst in five years and left them reeling at the bottom of the conference standings with just four points from 10 games. A series of less-than-impressive recruiting classes led Cal here, and they still look like they’ll struggle to compete with the conference’s best. Kevin Grimes teams are typically defensively stout, but they had just one shutout in 17 games last year, and that was with keeper Jonathan Klinsmann. The netminder is now gone after two years following a pro deal he signed with Hertha Berlin in the offseason. There is no silver bullet on the roster, and only one defender arrived in the 2017 class.