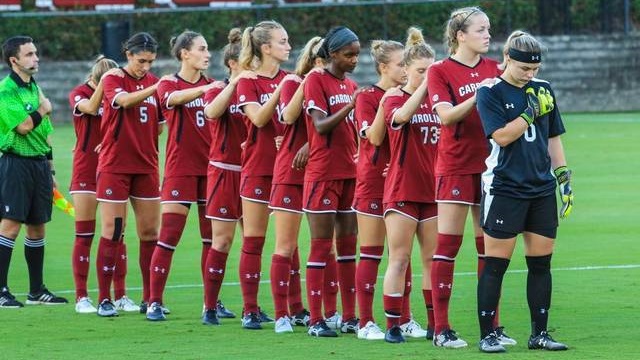 If anyone had any doubts about the lengthening depth being cultivated in the SEC these days, the 2016 season was the best indicator yet. South Carolina, never a traditional power, entrenched itself in the top five for much of the season. Auburn joined longtime national blue blood Florida in the top 25 with a 17-win season. And the rise of Arkansas continued apace with an 18-win season and an NCAA tourney win.

So it goes in the SEC these days, where the stable of title contenders is probably as deep as it’s ever been.

After winning 12 games the season before, South Carolina splashed into 2016 with a program record 21-win season that bottomed out against North Carolina a step shy of the College Cup. South Carolina enters the campaign as perhaps the easiest pick to repeat as SEC champs, but the Gamecocks lost enough in the offseason to wonder if they can. Savannah McCaskill returns, of course, and the nation’s best forward will have something to say. But is five returning starters enough to pull themselves back up to the pinnacle? Time will tell.

Auburn was the other true record-maker in the SEC in 2016, and questions abound regarding the Tigers’ ability to claw back to the Elite 8 or, perhaps, even make a College Cup. The attack isn’t much of a question. Auburn returns top goal-getter Kristen Dodson, and there’s enough in the attack to trouble even the SEC’s stingiest defenses. But can Auburn return to the conference’s top two in the wake of a loss like Kiana Clarke?

Arkansas is perfectly emblematic of the league’s rising tide. The Razorbacks made their first SEC tournament final since 1996 last year, and they notched their first ever NCAA tourney win as a host shortly thereafter. They return enough to think they might be the staunchest competitor for what appears to be South Carolina’s conference again, although the loss of do-everything midfielder Claire Kelley will be tough to swallow. Much will be expected of the defense, which returns an All-SEC core of Qyara Winston and Jessi Hartzler.

Florida rounds out what looks again to be a breakaway top four. The Gators won the conference tournament and made a deep NCAA ran last year, but they somehow have to find a way to replace scoring dynamo Savannah Jordan, who came within touching distance of Abby Wambach’s career goals program record. The return of stalwart Gabby Seiler is an enormous boon, which Florida needs after also losing Meggie Dougherty Howard to the NWSL draft in the offseason. Florida has enough back to stay in the top four next year, but are the losses too heavy to challenge the Gamecocks?

The next tier down was a jumble last season, and it’s unclear who will emerge as the next dark horse. Tennessee keeps adding enormously impressive recruiting classes, but the on-field breakthrough has yet to fully emerge. The Volunteers return Katie Cousins from a redshirt year for the U20 World Cup. She’s perhaps the finest possession midfielder in the country, so they’ll have a fighting chance in every contest. They’ll need the at times inconsistent scoring to keep pace.

Texas A&M’s slide in the wins column since the 2014 College Cup run bottomed out at 12 last year, which marked coach G Guerrieri’s worst record since he booted up the program in 1993. The Aggies still managed an NCAA win and took eventual champ USC to the wire, but they’ll need more from leaders like Mikaela Harvey and Haley Pounds in addition to rising contributors like Ally Watt. They won’t want a repeat of 2016, and you’d bet on them getting on the right side of .500 in the SEC this year.

Missouri and Vanderbilt were both pleasant surprise packages in 2016. Most figured the young Tigers were still a year or two away from this sort of SEC success, but the emergence of Freshman of the Year Sarah Luebbert, who struck for 10 goals, put them ahead of schedule. They’ll have to cope with the loss of team leader Melanie Donaldson, but there’s a lot back: top three goal-getters Luebbert, Allie Hess and Jessica Johnson are all back in the saddle for another go at the top.

After winning just five conference games combined from 2012-2014, Vanderbilt hit that number in 2016 alone. What do the Commodores have cued up for an encore? A rise above .500 perhaps? The transfer of former Stanford standout Stephanie Amack for a final year as a graduate student makes that a distinct possibility. Amack is immediately one of the SEC’s top five or 10 best players, and the Commodores have enough back to think they’ll pull off an unexpected win or two.

Which of the league’s sub-.500 teams from a year ago have enough back to make a run at the conference’s top half? Alabama might be the best poised. Despite not landing a single player on the first, second or freshman All-SEC teams, Alabama’s across the board consistency nearly doubled its win total from the previous season. Nine starters return, and don’t be surprised if the Crimson Tide break the double-digit wins threshold this year. Again, this league is deep.

Ole Miss, Georgia and LSU are probably in the next tier down. The Tigers struggled to consistently find goals last year, and the outbound transfer of top scorer Jorian Baucom to Colorado probably hit the clubhouse especially hard. The simultaneous graduation of Summer Clarke, one of the best players in program history, won’t help matters. LSU has an unbelievably large 16-player freshman class, so this is probably ground zero of the rebuild. Don’t expect a winning record just yet.

Ole Miss is in similar straits. Sixteen of the Rebels’ 26 players are underclassmen, which means a lot of responsibility should fall to CeCe Kizer’s feet. She had something of a sophomore slump after taking home 2015 SEC Freshman of the Year honors, and she’ll have an enormous role to play in whether the Rebels collect more than four SEC wins this year. Georgia’s more experienced – the Bulldogs boast a quality nine-player senior class – but also have a big name to replace in Marion Crowder. In fact, Georgia lost three of its top four points-getters from a year ago, leaving some significant gaps to fill in 2017.

Kentucky and Mississippi State both notched just one conference win in 2016, but both can reasonably hope to at least double that return this season. Mississippi State’s Mallory Eubanks enters her senior year as one of the SEC’s most capable scorers, and she’s flanked by a talented nine-player senior class fully capable of winning games in this league. Kentucky was exceedingly young last year and put two players, Evangeline Soucie and Marissa Bosco, on the All-Freshman team. Coach Ian Carry took over the team in the offseason, and he has some pieces to work with right away. Just don’t expect fireworks off the bat.