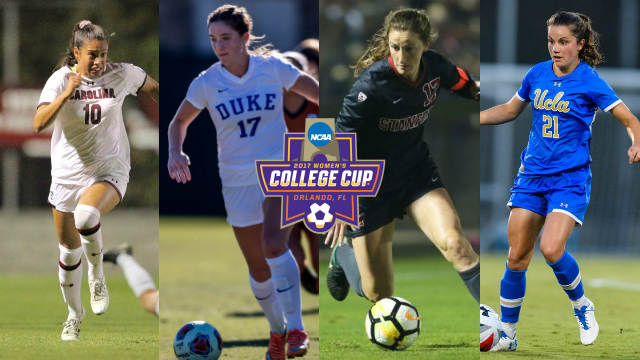 The final weekend of the 2017 women’s Division I season is here, with the last three games of the season set to take place in Orlando, Florida.

Four teams head to the Sunshine State with the aim of securing a national championship. Below is a preview of Friday’s games (kickoff times EST).

The first semifinal evening sees the favorites look to keep rolling straight into the national title game. Stanford has rolled off 20 straight wins, in mostly emphatic fashion. The Cardinal are loaded on both sides of the field, despite some battling through a couple of injury issues. It starts at the back as central defenders Tierna Davidson and Alana Cook provide a stout platform, shielded by midfielders Andi Sullivan and Jaye Boissiere. Going forward, freshman Catarina Macario’s been the pick of the attackers this season, though in truth she’s just one of many offensive-minded players that can do damage. Jordan Dibiasi, Kyra Carusa and Ciavana Kuhlmann have scored big goals as well, so if one player is having an off night, the others can pick up the slack. For Stanford, the numbers do the talking, as the Pac-12 champions have outscored opponents 86-7 on the season.

If there’s a team out there capable of killing the game and finding a goal against the run of play, South Carolina has the formula. Stout at the back, from goalkeeper Mikayla Krzeczowski, to defenders like Grace Fisk, Anna Conklin and Jackie Schafer. Being so defensive-minded obviously limits a team going forward to an extent, so the Gamecocks have to keep this game close to have a chance. Savannah McCaskill’s ability to score and create against a defense like Stanford’s is an opportunity to make a significant statement to pro scouts. Grace Bahr’s chipped in eight goals of her own, so if McCaskill is bottled up, the onus will fall on her shoulders.

If Friday’s first semifinal trends towards a low-scoring affair, fans willing to stick around should be rewarded with both good soccer and goals in the second matchup. Duke and UCLA both feature high-powered offenses that look to build up and play between the lines to create chances. The ACC perhaps holds a slight advantage heading into this one, given the team’s defensive record. Imani Dorsey’s saved her best for last, and the attacker will look to bring it from either wide areas or in behind the Bruin back line. Having Kayla McCoy healthy for a full season has provided a huge benefit as well, and she’ll be another player to keep an eye on as she matches up against UCLA’s center backs. Duke’s midfield possesses plenty of quality, from Canadian international Rebecca Quinn, to technically excellent players such as Taylor Racioppi and Ella Stevens.

One of the keys in deciding this matchup will be the battle of Quinn and her international teammate, Jessie Fleming. The latter’s ability to create things while marauding box-to-box is a huge asset for a Bruin side that looks to get numbers forward. Hailie Mace’s ability to finish chances in front of goal is also going to be decisive, as she scored for the first time since October 22 in the quarterfinal win against Princeton. Mace has the athleticism to stretch Duke’s defenders, so Taylor Mitchell and Schuyler DeBree will need to be alert. Aside from Fleming, UCLA is stocked with tricky attacking midfielders. Skewing on the young side, Delanie Sheehan, Ashley Sanchez and Viviana Villacorta have all delivered in their first season, and need to extend that one more game to advance to Sunday’s final.