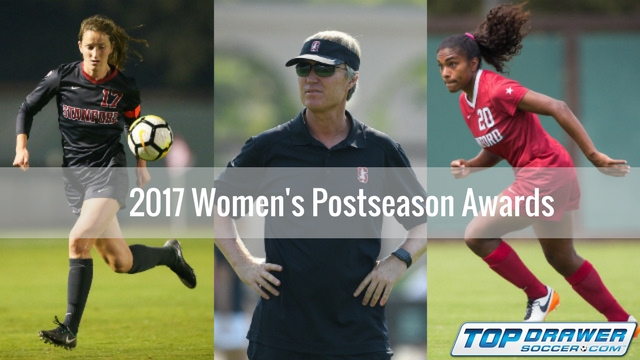 Plenty of quality was on display in the 2017 Division I women’s season, with the Stanford Cardinal eventually emerging as champions at the beginning of December.

As a result, the Cardinal dominated this year’s TDS individual awards.

Midfielder Andi Sullivan earns the TopDrawerSoccer Player of the Year nod, eclipsing teammate Catarina Macario and Pac-12 foe Jessie Fleming for the award. Making a return from an ACL injury that ended her 2016 campaign, Sullivan started 17 games, making a total of 22 appearances. She wasn’t a huge factor in the team’s offense, scoring three goals and chipping in six assists, though her play from central midfield laid the platform on a team that scored 91 goals and conceded only nine. Her leadership and experience -- Sullivan has seven caps for the full women's national team -- were also vital in leading the Pac-12 side to the summit of soccer. Sullivan's ability to drop into the back line when teammate Tierna Davidson bombed forward from her center back spot, were one of the many weapons that allowed the Cardinal to excel in the final third.

One of those weapons is the TDS Freshman of the Year, forward Catarina Macario. The attacker made a huge difference for Stanford this season, and staked a strong case for Player of the Year. In 25 games (24 starts) Macario scored 17 goals and added 16 assists. Scoring in a variety of ways or setting up teammates, her ability to create space with passing and movement was difficult to stop, and she scored some of the best goals of the 2017 season. A top three recruit from the class of 2017, Macario easily made the biggest difference among first-year players.

For the first time, TopDrawerSoccer.com also honors the best coaching effort in DI soccer. While there were several impressive candidates, from UCLA’s Amanda Cromwell, Virginia’s Steve Swanson and Duke’s Robbie Church, Paul Ratcliffe of Stanford claims this year’s honor. His team had arguably the most talented roster on paper, and Ratcliffe and his staff were able to not just unlock a national title winning combination, but lead an offense that scored 91 goals, and a back line that conceded just nine.

Along with the three individual awards, TDS releases its annual Best XIs, honoring the nation’s top players this past season. Criteria for the Best XI includes team accomplishments, individual quality and performance throughout the year.

Later this week, TDS will also update the Top 100 players to watch lists and the Top 20 conference player rankings.