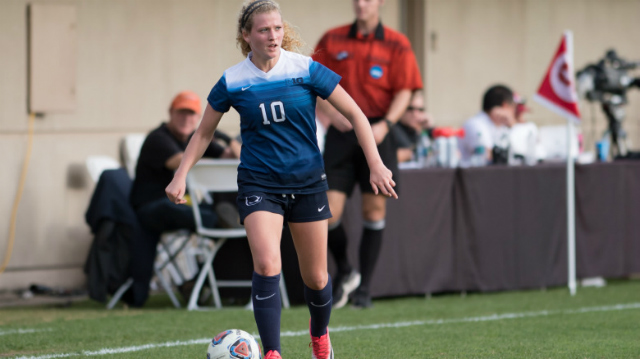 A new season of the Big Ten resets the slate for the 14 teams in the conference. Last year, a strong senior class led Ohio State to the regular season pinnacle; the Nittany Lions caught fire in the conference tournament, winning that and making it to last year’s NCAA quarterfinals.

For the Buckeyes, this year is a significant reset after losing dynamic seniors Sammy Edwards and Nikki Walts. Goalkeeper Devon Kerr provides ample experience, while they also have the services of U.S. U20 left back Isabel Rodriguez to call upon.

One side that has punched above its weight of late is Minnesota. The Golden Gophers bring back April Bockin and Molly Fiedler from a side that finished in second place. A tough non-conference schedule includes Utah and Stanford, so there’s no reason to believe that the team won’t be ready for the Big Ten grind. Despite that second-place finish in the regular season (tied with Northwestern) Minnesota missed out on the tournament, something they surely will wish to rectify this season.

Few programs have had the kind of five-year surge that Northwestern’s enjoyed. Replacing Lauren Clem in goal is a big ask, though there is still plenty of talent that’s returning, including defender Hannah Davison, Kayla Sharples and midfield maestro Marisa Viggiano. Finding enough goals is always a big ask for any program, though Northwestern is usually tough to breakdown and needs just a goal here and there to enjoy a strong campaign.

Losing Casey Murphy is a big blow to the Scarlet Knights, as the former Rutgers goalkeeper left school with a year of eligibility left. However, expect to see the program retain its organization and defensive prowess with the likes of Kenie Wright and Chantelle Swaby back in the fold. How rising sophomore Amirah Ali can lead the offense is critical. If she takes a step forward, continuing to contend for a title is certainly no big ask.

After struggling through a portion of the Big Ten slate, Penn State righted the ship, winning the conference tournament and coming one win shy of the College Cup. There are a lot of pieces back from last year’s team, including Maddie Nolf (previously Maddie Elliston), Kaleigh Riehl and Emily Ogle, providing a formidable spine. If the Nittany Lions are to push their way into the conversation of elite programs, a handful of players will need to step up. That includes Frankie Tagliaferri, who was hit or miss during her first season. The team lost 18 goals from last year’s squad, as Laura Freigang turned pro back in Germany, while Frannie Crouse and Megan Schafer graduated.

Wisconsin has some interesting pieces coming together for the new season, which could lead to a strong season. Midfielder Victoria Pickett’s an experienced Canadian youth international, while Dani Rhodes can make things tick over in the final third. There’s an influx of rising sophomores that stood out last season, with Samantha Kleedtke, Cameron Murtha and Alexandra Rice impressing. How they pick up this fall could dictate how competitive the Badgers are this season.

Thanks in part to a huge season from Big Ten forward of the year Maddie Williams, Purdue enjoyed a strong year despite not making the NCAA Tournament. Leading the team is a pair of rising freshmen goalkeeper Katie Luce and midfielder Sarah Clark. If they can find a way to pick up a result against West Virginia and South Carolina during the non-conference portion of the schedule, it could jolt their chances of an at-large bid.

There’s enough pedigree on Nebraska that suggests they could find a path to the NCAA Tournament. Returnees Meg Brandt and Sinclaire Miramontez bring U.S. youth national team experience to the fold. Like other Big Ten sides, the marquee win eluded them a year ago, and is a must to get into the tourney. A two-game swing to Duke and NC State will be crucial in that respect, provided Nebraska can hold serve around .500 in the conference.

Can a talented trio of rising juniors lead Iowa to the postseason? Nataliee Winters snagged Third-Team All-Big Ten honors last fall and is joined by Devin Burns and Kaleigh Haus as key pieces. A 1-0 loss in preseason is perhaps a bit concerning, though exhibition tune ups are just that. They’ll take on Pac-12, Big 12, SEC and Big East foes in non-conference play, though without a strong performance in Big Ten action, the postseason seems a bit of a stretch.

There’s a new head coach at Michigan, a talented roster that underachieved to a 6-6-6 record last year under the now-departed Greg Ryan. Taking over in Ann Arbor is former USC associate head coach Jennifer Klein, a 2016 national title winner with the Pac-12 outfit. Klein has some pieces to work with Reilly Martin heading into her senior season, and Canadian starlet Sarah Stratigakis only a sophomore. Taylor Timko is another prominent leader within the group, though there’s uncertainty hanging over the goalkeeper Hillary Beall, who dropped out of the U.S. U20 World Cup roster with a leg injury. The severity of that hasn’t been disclosed, but it could leave sophomore Isabel Nino or freshman Sophia Ivezaj to deputize while she recovers.

Indiana had issues at both ends of the field last year, conceding more goals than they scored in 2017. The good news if that leading scorer Maya Piper leads the line as a senior, making her hungry to contribute to a winning season. Chandra Davidson is only a junior; she tallied six goals and added two assists last year. 2013 was the last time IU finished over .500, finishing with six and seven wins overall the past two years respectively. That shows that the team isn’t too far away from that bar if a bounce goes their way in a handful of games.

Without its top player from last year’s (the now graduated Jamie Cheslik) Michigan State enters the new season voted to finish bottom of the conference in preseason polling. A big X-factor in replacing Cheslik is freshman Camryn Evans. She’ll link up with senior Alexis Warner in the final third to buck the prediction.

The post-Janelle Flaws swoon has lasted two years at Illinois – though obviously about more than just one player. It’s notable, however, that since the forward graduated the team has struggled to win games. Last year, they scored just 13 goals and conceded 35; those marks are a long way from indicating that a quick turnaround is on the cards. They did add 11 freshmen, including a pair of internationals to continue to steer things in a different direction.

Maryland heads into the third season under Ray Leone. Things looked promising at the start of last year before injuries tore through the squad and left them at the bottom of the Big Ten. Goalkeeper Rachel Egyed returns for her senior season between the posts, while forward Jarena Harmon enters her final season of eligibility. Even if the Terps remain far from contention, the improvement should continue provided the team stays healthier.