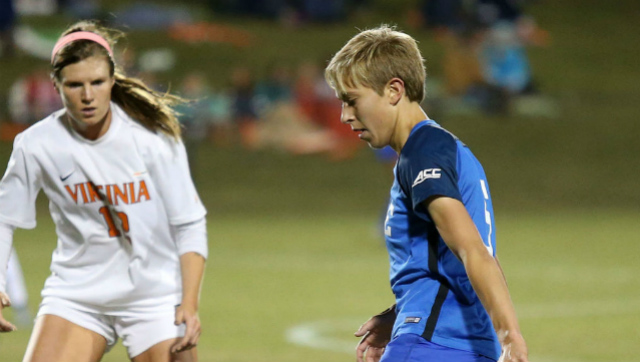 The 2018 NWSL Draft takes place on Thursday, January 18. TDS released its Top 40 prospects that have declared for the draft this week.

One of the big questions heading into the draft is whether or not Sullivan ends up declaring for it. Seen as the consensus No. 1 overall pick, her contribution with the national team cements her chances of making it at the next level. Sullivan’s soccer IQ, touch in the midfield and all-around ability to step in right away makes her a clear selection at the top.

A move into the midfield in 2017 for Quinn demonstrated the caliber of player that she is with the ball at her feet. Connecting the play for the Blue Devils this season, she can play either in central defense or as a holding midfielder. The one knock on Quinn has been injuries over her collegiate career, as she missed the 2016 campaign. The full Canadian international could potentially look abroad as well, although she’s a quality player that can jump into the NWSL this year.

The straw that stirred the drink for South Carolina the past four seasons, McCaskill’s outstanding career led the Gamecocks into the College Cup. A tremendous goal-scorer, tenacious player and good passer of the ball, there may be questions about her ideal position in the NWSL. That concern aside, McCaskill will put the work into becoming a big player that can compete for Rookie of the Year honors in the right situation.

Capable of playing just about anywhere on the field, Seiler’s versatility is what pushes her up the board and into this spot. Smooth with the ball and good enough defensively, her progression after joining Florida could push her into contention to the full USWNT one day. However, news that she joined up with the Florida basketball team raises an eye about her availability when it comes to the NWSL. Seiler’s a lock for a first-round pick barring a huge surprise.

Arguably the top center back available in the draft pool, Gibson’s come along in leaps and bounds over her four years at Cal. Called up into U.S. U23 WNT camp at the end of 2017, Gibson’s going to be in contention for a first-round pick after leading a Cal back line that conceded just 11 goals.

Dorsey is well positioned after making a huge impact in college soccer as a senior, scoring 14 goals and adding 10 assists, attacking from wide areas. Given the league’s preference for athleticism, that sets up Dorsey to be picked high in the draft, particularly given she’s close to the top forwards available in the draft. Dorsey needs to be consistent with her finishing in order to truly excel, though she has all the tools a team might be looking for.

Big, dynamic and physical, Abam is a native of Houston and likely to be high on the list of the Dash’s draft list. After a stellar four years at West Virginia, Abam’s in the same vein as Dorsey when it comes to possessing the kind of skills that can translate at the NWSL level. A report suggesting that Abam could look overseas could see her slip on draft day, as West Virginia players do have a recent track record of heading abroad.

Arguably the top goalkeeper in the country this season, Boyd’s a sensational goalkeeper that seeks to make the jump to the NWSL. The lone knock on the U.S. youth national team veteran is her height (listed at 5-foot-9) and her ability to deal with crosses. If she can make those adjustments quickly against bigger, strong and faster opponents, Boyd should have little trouble emerging as a potential starter in the next year or so.

Watching UCLA this season, it was clear that the outside backs were a big part of what the team tried to accomplish going forward. Goralski’s been excellent for the Bruins in that capacity, getting forward to combine with her teammates and adding another element to the attack. If she can replicate that in the NWSL, and more importantly, show the required defensive skills, Goralski’s going to be a big hit at the next level.

An absolute menace when she’s on her game, Crouse’s production dipped significantly during the past season, both when it came to minutes on the field and goal total. That’s a reflection of Penn State’s up-and-down season, though Crouse and her athleticism and physicality should be an asset for an NWSL team. While she’s not an out-and-out No. 9, she should be able to move out wide in a 4-3-3 or even in a 4-4-2 and contribute no matter the system.