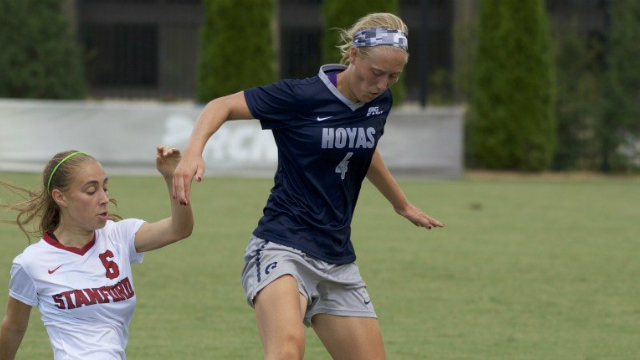 The 2018 NWSL Draft takes place on Thursday, January 18. TDS released its Top 40 prospects that have declared for the draft this week.

Converted from forward to an outside back, Cerda enjoyed her best season in college this past fall. Her ability to get into the attack, along with teammate Zoey Goralski, added a unique element to UCLA’s offense. For a league that emphasizes the ability of outside backs to get forward, Cerda showed last year that she can do that job. The question for her success boils down to how far along her defensive ability has come, and whether or not that is up to par to what NWSL teams are looking for.

Registered for the draft, Murphy and Emily Boyd are neck-and-neck when it comes to the top goalkeeper in the class. However, with reports emerging that Murphy could end up going abroad and playing in France knocks her down the board. A team could end up selecting her in order to secure here rights if things don’t work out in Europe.

Looking for a quality, dynamic wide player that could play on the wing or as an outside back? Keever has all the makings of an NWSL talent, with her ability to break down opposing defenders on the ball and get separation into space. Obviously, she’ll need to be more consistent and productive in the final third to cement an attacking role, though Keever’s shown through four years, against high-level college opposition, that she is talented enough to do so.

A consistent presence for the Georgetown back line over the past four seasons, Wenger has the athleticism and pedigree to make it in NWSL. A 5-foot-8 defender that’s capable with the ball and a key part of Georgetown’s run to the 2016 College Cup, in the right situation, she could even compete for minutes this season. Like other Hoyas before her, Wenger could end up sitting out the first half of the season to finish her degree.

It’s not every day that a full Brazilian international is available in the NWSL Draft. But after a sensational final season at Baylor, De Lima’s on the board waiting for a team that’s willing to spend an international slot on a college pick. Her journey from Belo Horizonte to Baylor – with a stop at Monroe College In New York in between – unearthed a potential gem. Smooth on the ball and pulling the strings in the center of the park for Baylor’s run-and-gun approach, De Lima’s showed over the past season that she has what it takes to be at minimum, a solid player at the professional level. The question becomes whether or not she can squeeze onto a roster, and justify a team using its international slot, especially after showing her quality over just a single season.

It’s never a bad thing to score a career high in goals as a senior to put yourself on the radar of pro clubs around the country. Brianna Visalli pulled that off in 2017, scoring 14 goals and setting up six in her final year of eligibility. Pepperdine enjoyed a surprisingly successful season as well, setting up Visalli to make the jump to the NWSL. While there might be concerns about the lack of a clear position at next level, Visalli’s ability to find space and pick passes (or finish) in the final third should be valuable to a team that does its homework.

While her statistical profile may be modest at the end of her career at Mississippi State, Malloury Eubanks should be in the mix to her name called on draft day. A forward from Kentucky, she is a high-quality passer of the ball that could excel in one-on-one situations. There’s potential versatility here as well, as teams could shunt her out and try her as an attacking outside back.

Captain of a Wake Forest side that surged back into the NCAA tournament, Huster is a versatile and quality option that can play in midfield or along the back line. While her size (she is listed at 5-foot-4) might preclude her from playing in central defense, Huster’s ability with possession and experience in a high-quality conference makes her another under-the-radar draft prospect looking for the right opportunity.

Piling up almost 8,000 minutes at a program like Penn State requires quite the combination of quality, consistent, work ethic and determination. Elizabeth Ball clearly demonstrated that during her four years at State College, and that skillset could end up translating very nicely in NWSL. Converted from her striker spot at the club level, Ball moved back and was a big part of the team’s 2015 national championship. Given the lack of outstanding center backs available in the draft, she could certainly have her named called early on Thursday.

An extremely consistent central defender that earned ACC Defensive Player of the Year honors last fall, DeBree’s hit her heights over the past two seasons bossing the team at the back. If she can show that she’s athletic enough and consistent enough with possession, there’s little doubt that she can make it work in the NWSL. DeBree did just that this past fall for Duke, and that, combined with her leadership and experience over the last four years are sure to pull her into the second or perhaps even first round.