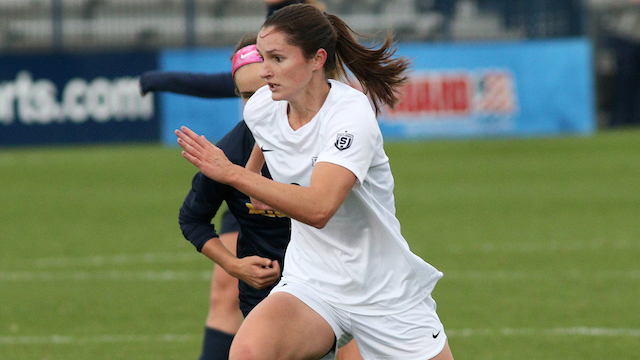 Big Ten sent six teams to the NCAA Tournament in 2018, but came up short of sending any team to the College Cup. Penn State lost in the Elite Eight and will use that chip on the shoulder to motivate the strong recruiting group to challenge for the National Championship this fall. Rutgers, Wisconsin, Ohio State, and others are also in the battle for the national tournament this season.

Penn State put three players on the MAC Hermann Trophy watch list. Reigning Big Ten Defender of the Year Kaleigh Riehl highlights that list. Riehl has quite the resume and will be a focal point for Penn State earning a spot at College Cup. Sam Coffey, a transfer from Boston College, and Frankie Tagliaferri also earned a spot on the MAC Hermann Trophy watch list. The Penn State returners are a strong point for the program, but the recruiting class for 2019 is what Penn State fans should be excited about for 2019. Kate Wiesner might be the best player on the roster already. Julia Dohle, Cori Dyke, Leah Scarpelli, Payton Linnehan, Shelby Craft, Angela Aguero, and Jordan Canniff all have national team and high level club experience. It should be a great year for the Nittany Lions.

Rutgers played in 11 overtime games in 2018, and somehow won six of them. Amirah Ali was a major reason why they were so successful in overtime with four goals and an assist in the overtime period. The other reason why Rutgers had such success in Golden Goal situations was goalkeeper Meagan McClelland, who won the Freshman of the Year for the conference last season.

A spring injury suffered by one of the best players in college soccer is set to sideline Victoria Pickett, who severely injured her knee earlier this year. That's a big blow to Wisconsin's hopes of pushing Penn State for the conference crown. Rising senior Dani Rhodes, who led the team with 10 goals last year, becomes even more important in the final third. If the team's defense continues to hold firm, the program brings enough back to soften the blow of her injury and keep an NCAA tournament spot well within reach.

The Buckeyes some key pieces to replace this season with Devon Kerr and Sarah Roberts gone from last year. There is still reason to be confident in Ohio State though. Isabel Rodriguez is the key player back from last season’s squad. Talani Barnett, Kayla Fischer, and Emaly Vatne are also back with the Buckeyes after strong seasons in 2018.

Nebraska kicked off the preseason in commanding fashion with a 4-0 win over Omaha. Dakota Chan, Sinclaire Miramontez, Savanah Uveges, and Adriana Maldonado scored in the win. Miramontez was a preseason pick for the MAC Hermann Trophy Watch List.

Janet Rayfield’s side goes into 2019 with an eye toward the NCAA Tournament and a mission for conference success. Alicia Barker is the top returner after earning conference and region honors.

It is going to be difficult to replace April Bockin in 2019 for the Gophers. Bockin was the all everything for Minnesota over the past four years. Minnesota did bring in a good recruiting class with Katelyn Duong looking like a key piece for the future.

Nicolette Hernandez and Sarah Stratigakis are among the key returners for the Wolverines this fall. The twosome combined to record 39 points in 2018. Hillary Beall is back in goal for Michigan after missing part of last season to an injury. Lily Farkas is one of the key freshman to watch. She has scored goals by the bucket at every level in the past.

Northwestern had three players drafted into the NWSL during the offseason - a big accomplishment for the program. The Wildcats will rely on goalkeeper Mackenzie Wood to lead the squad back to the NCAA Tournament. Rowan Lapi leads a rather large freshman class for Northwestern.

Natalie Winters is a stud and an annual honoree for the all conference awards. She enters her senior season with Iowa after starting 55 of the last 56 games for the Hawkeyes. With 10 returning starters for Iowa back this fall, the Hawkeyes are eyeing a spot in the NCAA Tournament this season.

New head coach Erwin van Bennekom enters his first season in charge of a DI program. The Hoosiers picked up some key transfers as well as a strong recruiting class to improve the roster for this fall. Freshman Avery Lockwood is definitely one to watch this fall as she could be a key player for Indiana. Melanie Forbes, Allie Schlom, and Chandra Davidson scored in the preseason opening win over Indiana State.

Twenty-one letter winners from last season’s squad, but the Terps are missing the starting goalkeeper and the leading scorer from 2018. Maryland will be counting on a big season from Alyssa Poarch and Loren Sefcik to push the group to new heights in 2019.

Purdue played in four games that went to overtime in conference play last season. The squad has kept it close with nearly everyone in the Big Ten. The key for 2019 will be turning those draws into wins for the Boilermakers. Sydney Sparks and Leanna Rebimbas look to be key freshmen to watch this season.

Last season was a bit of a struggle for the Spartans. They only earned two points from conference play, and struggled to get any confidence building results from the season. Michigan State does have some reason for optimism this season though. Leading scorer Camryn Evans is back for her sophomore campaign. New recruit Bria Schrotenboer could be an immediate upgrade to the squad.