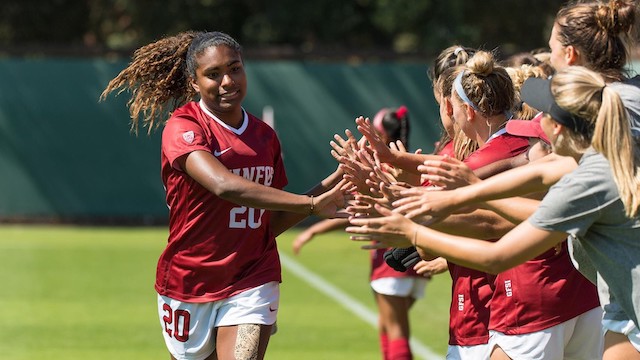 The Pac-12 motto is the Conference of Champions, and that has been especially true in women’s soccer recently. A Pac-12 program has won the women’s College Cup in four of the last eight years. This year feels like it will number five. Stanford is an easy proverbial favorite with all-world forward Catarina Macario back for her junior campaign. However, UCLA and USC also have legitimate claims to be considered among the favorites for the national title.

This fall will be an exciting one in the Conference of Champions. TopDrawerSoccer breaks down each team’s outlook for 2019 below.

The Cardinal ran away with the conference title and the postseason honors once again in 2019. It was the fourth consecutive season that Stanford won the Pac-12. Over that period, Paul Ratcliffe and his squad has only lost one conference game. While it looks like much will be the same for Stanford in 2019 with TDS Player of the Year Catarina Macario back for her junior season, there is a small reason for concern for Stanford fans. Four members of the 2018 Pac-12 All Conference team graduated from last year’s squad, and Tierna Davidson left with a year of eligibility. That reason for concern will probably be squashed early as this is the deepest roster in college season. Stanford brought in a number of top recruits and earned a top 15 Recruiting Class ranking even with the best player in college soccer back. Stanford will still face a challenge in the best women’s soccer conference in Division I, as many other programs put the bull’s eye firmly on the Cardinal in 2019.

In many ways, the 2018 Pac-12 championship was decided on Sept. 30 when Stanford defeated USC in overtime. The rematch in 2019 on Sept. 28 should be must-see TV. USC lost two key pieces from last year’s squad in Ally Prisock and Leah Pruitt, but they do return Pac-12 Goalkeeper of the Year Kaylie Collins as well as Savannah DeMelo (who would be the conference midfielder of the year in any other conference in the country) - both of whom made the preseason MAC Hermann Trophy Watch List. If Penelope Hocking can avoid the notorious sophomore slump, USC has the pieces to challenge Stanford once again.

The margins are razor thin in the Pac-12. It was one week last season that sealed UCLA’s campaign. A surprising loss to America’s team, Washington State, and then a tough loss to Stanford made it impossible for the Bruins to climb back up to the top spot in the conference. The Bruins cannot afford another slip-up in 2019. The roster is too talented not to put the goal on a conference and College Cup championship. Senior Jessie Fleming will be in the spotlight as she hopes to lead UCLA to a historic season in 2019.

Utah went from last in the conference in 2017 to fourth in the conference in 2018. It was quite the turnaround for the Utes. Paola Van der Veen and Hailey Skolmoski earned spots on the All-Conference teams, but both were seniors in 2018 so there is some concern that Utah could slip down the table in 2019. Hailey Stodden will be a key piece for Utah this fall after earning a spot on the Pac-12 All-Freshman Team in 2018.

Jalen Tompkins and Taylor Kornieck are the terrific twosome for the Colorado side looking to make some noise in the conference in 2019. Tatum Barton was outstanding for the team last year. Colorado will need a repeat performance from Barton in her senior campaign. The squad will also need a couple of players from the highly rated recruiting class to step into meaningful minutes immediately.

Arizona coach Tony Amato was rewarded with a contract extension in March, which is a pretty clear indication of the work he has done with the Wildcats over the past few years. Amato’s squad this season includes All Pac-12 Team members Jada Talley, and Emily Knous, who earned Freshman honors.

America’s Team scored a big win in the offseason when goalkeeper Ella Dederick was granted a sixth year of eligibility in Feb. Dederick was 5-0 last season prior to the injury and she might go 19-0 in 2019. WSU is not a one star show though. Forward Morgan Weaver is another one to watch for the Cougars. The biggest issue in the way of WSU’s perfect season is the most difficult schedule in college soccer. The Cougars face Stanford, USC, and UCLA on the road this season.

The Sun Devils recent recruiting classes have been the strong point of the program. Sophomores Nicole Douglas and Marleen Schimmer earned spots on the All-Freshman team last year. Arizona State will need both to make a big leap forward to push the program into a spot in the top five. Keep an eye on the freshman class as well.

It was tough to pick up wins in the Pac-12 last season for anyone outside of the top nine. This was especially true for Oregon, which had a rather lengthy dry spell during the middle of the season. The Ducks did end the year with a pair of wins over Arizona and rival Oregon State. If the Ducks can somehow carry that experience into 2019, they could contend for a tournament berth. Among the returners, Zoe Hasenauer gained the main plaudit in 2018 with a spot on the All-Freshman Team in the Pac-12 postseason honors.

The Huskies head into Lesle Gallimore's final season in Seattle seeking to make one last postseason push for her 26th and last campaign at the helm. A big step forward from local standout would go a long way to achieving that, as the freshman scored three and added a pair of assists in her debut season. There's the right balance between age and experience that if the Huskies can shore things up at the back and increase their offensive output, they'll have the games and opportunity to at least push for an at-large bid if the results are there.

After giving up 41 goals in 2018 and using three goalkeepers, Angelina Anderson might be the most important newcomer in the Pac-12 in 2019. The USA goalkeeper is not going to cure all the blemishes of last season, but she has the chance to turn this team around thanks to a massive upgrade at one position. California is the most likely team to go from near the bottom of the table in one season to near the top the next. Watch out for the Golden Bears in 2019, they’ve made all the right moves in the offseason.

Oregon State was the only team not to get a player on an all conference or all-freshman team in 2018. There is plenty of work to do in Corvallis. The problem for the Beavers is that this conference is unforgiving. There is no time for a rebuild when Stanford, USC, UCLA, etc. just reload year after year. New head coach Matt Kagan has a big challenge ahead. It will be interesting to watch how early he turns over the team to his freshmen. Skylar Herrera and Brianna McReynolds could be the key pieces to build around for the future of the program.