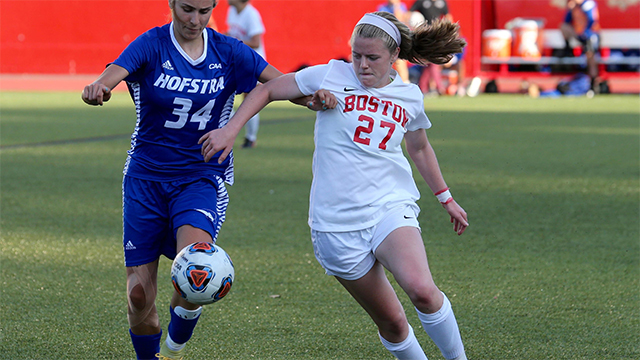 What happened in 2018: With a 9-0-1 mark in OVC play, UT Martin secured the regular season crown. But perennial power Murray State won the conference tournament for the third straight year, securing the conference’s automatic bid. Eastern Kentucky tied for third place with Eastern Illinois with a 4-3-3 record.

What to expect in 2019: Strong senior leaders have left UT Martin after their strong 2018, so it wouldn’t be a surprise to see Murray State lead the way in the upcoming season.

What happened in 2018: In an extremely tight race for the regular season conference title, Boston University edged Colgate by a single point and finished two ahead of Navy to win it. Bucknell finished in fourth, while Lehigh, Army, American and Holy Cross all finished with nine points in league play. Regular season champs BU secured the automatic bid with the conference tournament crown, bowing out to LSU in the first round after a 0-0 draw.

What to expect in 2019: It could be very similar to how last fall played out, with the trio of Boston University, Colgate and Navy leads the charge. That’s at least the way the preseason coaches’ polling breaks down, even if that is not a guarantee of how things may play out. If there’s an upstart in the upcoming season, Lehigh, Army or Bucknell look to have the rosters to put something special together.

What happened in 2018: On the back of a seven-game winning streak in conference play and a perfect 5-0 record away from home, Samford finished in first place. They finished four points ahead of UNC Greensboro, and six ahead of Furman, Western Carolina and East Tennessee State. UNC Greensboro clipped Furman in the conference tournament title game to punch the ticket to the NCAA tournament.

What to expect in 2019: Wofford and VMI enter the seasons with new coaches, while player of the year Cienna Rideout returns after leading UNCG to the NCAA tournament. Another wide-open season could be on the cards, with the competitive programs from last fall returning significant talent. Samford is among those sides, and could be tricky to haul down when the competition heats up.

What happened in 2018: A strong season for Central Arkansas saw the program secure the regular season conference title with a 10-1 record. They finished five points clear of Houston Baptist, with Lamar(w), Abilene Christian and McNeese State following. Abilene Christian won the conference tournament championship, defeating Stephen F. Austin to clinch a spot in the NCAA tournament.

What to expect in 2019: Armed with all but three starters who took the field in last fall’s conference final, Abilene Christian edged Central Arkansas in preseason coaches’ polling. The former is certainly a good shout as favorites, though programs like Lamar(w) and Stephen F. Austin have put together strong seasons in the past.

What happened in 2018: Grambling State managed to hold off Howard for the regular season conference title, posting a 9-1 mark and 27 points. The D.C. program finished just two points off the pace, with Texas Southern and Alabama State, third and fourth respectively. Howard put it together in the conference tournament, grabbing the auto bid.

What to expect in 2019: Another close race should be on the cards, with Grambling State looking like it could be the favorites or perhaps Howard. Alabama State, Prairie View A&M and Texas Southern have the look of potentially challenging that top duo – if it’s how things play out.

What happened in 2018: Denver and South Dakota State finished with identical 7-1 records in conference play. The latter fell in the semifinals of the Summit League Championship by a 3-1 score to Omaha. Denver secured the automatic bid with a 4-0 win in the title game.

What to expect in 2019: More Denver dominance seems likely in the regular season, as the Pioneers remain a premier mid-major side that does well on a regular basis. South Dakota State seems most likely to challenge, as head coach Brock Thompson owns a 15-1 record in his two seasons in charge of the Summit League side. A surprise package could be on the cards from either North Dakota State or Omaha, especially if the latter picks up where it left off with that semifinal upset.

What happened in 2018: After 10 games of conference matchups for each team’s, Texas State’s unbeaten 8-0-2 mark secured first place in the regular season. It was far from a runaway, with Little Rock and Coastal Carolina in touching distance, with Appalachian State and South Alabama following. Little Rock emerged from the conference tourney fray with the Sun Belt automatic bid.

What to expect in 2019: There’s enough returning to Texas State to suggest the program is going to be contending once again. Five players were selected to the Preseason All-Conference Team. But it will be no easy feat. Little Rock’s returners include Doro Greulich and Fanney Einarsdotir. South Alabama adjusted to life under a new coach last season, and is all but certain to take a step back towards contention. Further north, Coastal Carolina has the blend of returners and newcomers that could yield success in conference play.

What happened in 2018: A three-team race emerged over the course of the WCC season, which awards its auto bid to the regular season winner. BYU triumphed with an 8-1 record, but they were joined in the NCAA tournament by second-place finishers Santa Clara. Pepperdine, Gonzaga and San Francisco rounded the top half of the table.

What to expect in 2019: Plenty of talent departed the conference, but there’s high-quality returners. On paper, BYU and Santa Clara look to have the most coming back, and if Broncos’ junior Julie Doyle returns to her 2017 form, it could tip the scales in their favor. Pepperdine’s ability to compete will be interesting, as they lost significant pieces in Brielle Preece and Hailey Harbison.

What happened in 2018: A strong season for UMKC saw them edge a close, three-program race ahead of UTRGV and Seattle. California Baptist and Grand Canyon finished in the top five. Seattle won when it counted in the conference tournament, grabbing the automatic bid.

What to expect in 2019: Like other conferences, this could shape up to be a three-program race as well. Seattle finished first in the preseason coaches’ poll, but UMKC and UTRGV have the kind of firepower coming back to suggest they could mount a challenge. If a regular season champ emerges from outside that trio, it would be something of a surprise; but Utah Valley certainly would fancy their chances of putting a run together.