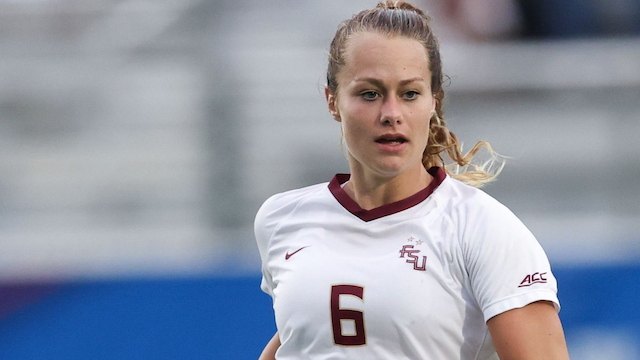 With three teams in the College Cup, the no. 1 selection in the NWSL draft, and the MAC Hermann Trophy winner, it’s hard to argue that the ACC was easily the best conference in college soccer in 2020. There will be a conference (or two) that will argue 2021 will be different, but on paper it might not be much different.

The MAC Hermann Trophy winner, Jaelin Howell, is back for another season. Florida State brought back nearly every player from last year’s NCAA tournament squad. But they won’t walk to a title this season.

Virginia brought back almost everyone as well including the key pieces of that stout defense that only let in one goal during the run to the College Cup. North Carolina brought in the No. 1 recruit from the class of 2021 along with a number of other talented players from that class. Clemson and Duke look eager to contend in the conference as well.

Jaelin Howell talked about getting some “redemption” for Florida State following the first day of training last week in Tallahassee. The MAC Hermann Trophy winner and reigning ACC Midfielder of the Year wants to win the NCAA Division I National Championship in 2021. The Seminoles return almost the whole team from the group that was in the title game last year, which will make them an early season favorite and a target for any team looking to make a name for themselves. Florida State has a challenging opening fixture against Texas A&M in Tallahassee.

The Tar Heels brought in the No. 1 recruit from the class of 2021 in Ally Sentnor. The Massachusetts native graduated from high school a year early to join this class. Frankly, it’s not to be excited about her arrival at the next level. She’s a dynamic talent that is highly regarded within U.S. Soccer and among the professional game. Playing for the Tar Heels is a daunting task. Chapel Hill is hallowed ground in the soccer world. Sentnor will be flanked by some of the top players in college soccer. Maycee Bell is one to watch after missing most of the spring due to an injury. She is one of the best defenders in college soccer when healthy.

With the top 12 players (in terms of minutes played) back from last season’s squad, continuity will be a big theme for the Cavaliers. During the run to the College Cup last season, Virginia’s strength was the defense last season. They only conceded one goal during the five games of the NCAA Tournament including shutting out Florida State in the semifinal. It’s fair to expect more of the offense this season as Lia Godfrey grows into her role and challenges for the top spot among the midfielders in the the conference.

With a pair of penalty kick victories in the 2020 NCAA Tournament, Clemson advanced to the quarterfinals for the first time since 2006. Building off of that success in 2021 will be the question. Makenna Morris is the one to watch on the squad, as she could be a dark horse to take home a player of the year honor in the conference. Goalkeeper Hensley Hancuff was excellent in 2020 as well and will be counted on again this season.

Duke, like many programs, benefits from the extra year of eligibility awarded to all student-athletes, as all three of the team captain from last year’s squad return for the 2021 season. Tess Boade, Caitlin Cosme, and Lily Nabet are among the 21 returning letter winners on the squad for this season. It will be difficult for the newcomers to crack the lineup this season, but the four freshman are a talented bunch and should push for time.

Emina Ekic scored seven goals for Louisville last season. No one else on the team scored more than a goal. With Ekic gone, there is a big hole in the roster for this season. Louisville brought in a 10-player recruiting class to hopefully find someone or a group of players to help fill that void. Gabrielle Kouzelos and Sarah Hernandez are back for another year, they led the team in minutes played last season.

With eight of their first nine games at home, the pressure is on the Hokies to get off to a hot start during the 2021 season. After going 4-3 at home in 2020, there is some room for improvement in that regard. Alia Skinner is a year more experienced in goal, which could be key to a successful campaign. Victoria Powell was a standout in the preseason opening win over Loyola.

Sammi Fisher and Kalyssa Van Zanten are back, which takes care of much of the attacking power for the Irish. Fisher and Van Zanten led the team in scoring in 2020 and will look to do the same this fall, but they should get some help. Korbin Albert headlines a talent eight-player freshman class for Notre Dame. There should be high expectations on this group to help the Irish to a top five finish in the conference this season.

While Wake Forest brought in 16 newcomers for the season, it is returners Ryan Brown and Sophia Faircloth that should have fans excited. The duo did it all for Wake Forest in 2020 and are back to improve on those lofty totals from the last campaign. Wake Forest will need some of the newcomers to step up to break through into the top half of the conference standings this season.

Randy Waldrum continues his rebuilding project with Pittsburgh in his third season in charge of the program. Pitt went 11-5 last year and then held a very impressive 6-1 record at home. If Pitt can continue to make Ambrose Urbanic Field a fortress, this could be a sleeper pick for a finish in the top six in the league this season.

Boston College had a rough go of it in 2020 with only three wins from 14 games. There is plenty of room for improvement this fall. There is reason for the optimism for the Eagles. They finished the 2020 season with seven points from the final four games. Sam Smith led the team in scoring with five goals and three assists.

A hot start to the season is key to the success of the campaign for Syracuse in 2021. With six of the first seven games at home, Cuse needs to pick up some confidence boosting wins from that opening slate of games.

Last season was a learning experience for the Hurricanes as they finished the campaign with only one win from 13 games. There is a reason to believe 2021 will be different. Center back Delaney Brown started every game last season as a freshman and showed some promise as a future leader for the program. She’s back for another campaign with the Hurricanes as they look to build a more complete team in 2021.

The Wolfpack sat out the fall campaign last year, hence why they have no record from ACC contests for the 2020 season. NC State was a respectable 5-3-1 during the spring season, which included a 1-2 record against ACC foes. Toni Starve, Leah Hall-Robinson, and Denae Antoine led the team in goals scored with two goals each. All three are back for the 2021 campaign. Look for some key recruits to also step up for NC State this fall.