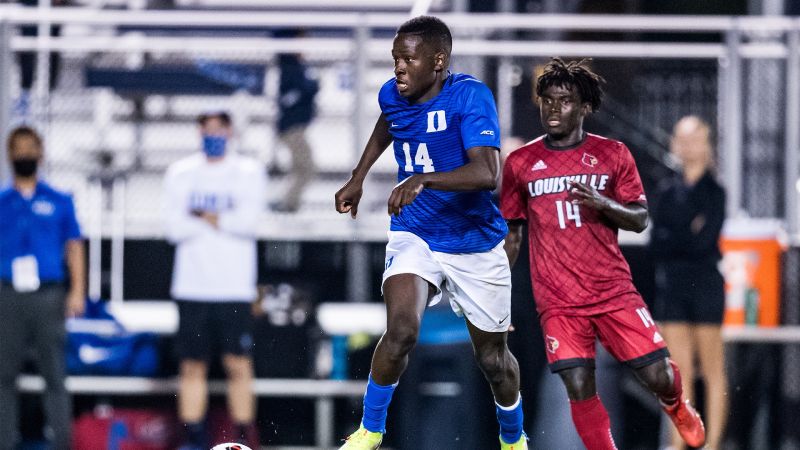 The ACC has always been one of the best conferences in men’s college soccer. It proved as such in 2021, sending eight teams to the NCAA Tournament, with five of them accounting for the last 16. The conference produced eventual national champions Clemson, too.

And the ACC appears to be just as strong this year. Although it might not have a squad that looks immediately ready to compete for a national title, there are at least four teams that could make a deep run in the tournament. Reigning champions Clemson look dangerous, while a retooled Duke side could also threaten. Pitt looks equally strong as it did last year — and Wake Forest has also pieced together a strong roster.

There are dangerous sides further down the conference, too. Virginia, Syracuse and NC State appear to have improved, and could easily beat any of the league’s elite on their day. Talented individuals, such as Louisville’s Boubacar Kamara and Duke’s Shakur Mohamed, will further contribute to an enticing conference.

The Eagles are a hard team to project in 2022. Their 2021 season was marred by inconsistency. They enjoyed some promising results, such as a 3-2 win over Wake Forest. But there were also negative ones, such as away losses at Yale and NC State. Boston College’s home form last year was vital, as it went 5-0-2 at Newton Campus Field. Maintaining that, while picking up a few away wins, could see its season shape up nicely. Doing so will require another solid season from All-ACC Defender Victor Souza — his leadership will be crucial in an otherwise young team.

Clemson lifted the College Cup in 2021, and it has a good chance of making another run. The Tigers were a well rounded team, which didn’t over rely too much on one single player for production. That style should set them up well for this fall, especially with significant roster turnover. Clemson has lost a couple of its best attacking players, as well as its captain, George Marks, in goal. But key returners, such as the exciting forward Isaiah Reid and solid defender Hamady Diop, should make for a side capable of beating anyone.

The Blue Devils saw two starters selected in the first round of the MLS SuperDraft and find themselves with two big holes to fill. Thorleifur Ulfarsson bagged 19 goals in 2021, establishing himself as the best striker in the conference — if not the country. The loss of defender Ian Murphy might be even more damaging, as he provided invaluable leadership at the back. But this is a talented Duke side, with copious youngsters to lean on. All-American third team selection Peter Stroud is among the nation's best midfielders, while Shakur Mohammed has the quality to add to his 10 goal involvements from last year. Other pieces will need to fall into place — especially at the back — but the Blue Devils are the presumptive favorite to top the Coastal division.

The Cardinals split the ACC Atlantic Division title with Clemson in 2021, marking one of their most successful conference seasons in recent memory. Although they struggled to maintain that form, the Cardinals showed enough promise for an even better 2022. Aboubacar Camara bagged 13 goals as a sophomore, earning an All-ACC First Team spot. He returns, along with eight other presumptive starters, to make up an experienced squad. A top 25 recruiting class will further bolster an already promising team.

The Wolfpack grabbed a solitary ACC win last year, nabbing a 1-0 overtime victory against Boston College. It was an otherwise sluggish season for NC State, as it never found momentum in conference play. And it might be another tricky year for the Wolfpack. With three of their top goalscorers departing — as well as valuable veterans Brad Sweeney and Jose Garcia — they’re thin on experience. Striker Luke Hille is promising, having bagged six goals in eight appearances as a freshman. But NC State will need major improvements from the current squad — as well as big seasons from newcomers — to compete in a stacked conference.

2021 was a disappointing year for the Tarheels. They went 4-4 in conference play, highlighted by losses to rivals Duke and Wake Forest. But there were bright spots, such as a senior day win over Notre Dame. North Carolina has lost three All-ACC graduate students but adds a deep and talented class to its crop of returners. Grad transfer Sebastian Schacht should also add quality to the midfield.

Notre Dame got hot in early November, rolling through the ACC Tournament before making a College Cup appearance. And after major roster turnover, repeating that success will be tricky. Some faces will be back in the lineup, including Matthew Roou and Bryan Dowd. Grad transfer Maurice Williams, a defender from Seton Hall, should add some defensive solidity, too. But head coach Chad Riley has a lot of work to do, even after bringing in a promising class. An NCAA Tournament appearance is likely, but another go at the national semis would be a major surprise.

Pitt continued to improve in 2021, earning its second consecutive tie for the Coastal division, while also making an Elite Eight appearance. The Panthers relied on a mostly young roster, one heavy on international talent. And most of those pieces will be back, especially in the final third. Notably, Pitt has Bertin Jacquesson leading the line. The winger was a steady source of goals and assists in 2021 and is a player to watch this season. Pitt will need to sort out the goalkeeper position following the graduation of Nico Campuzano, but they’re a safe pick to capture another Coastal Division crown.

There were a few bright spots in a mixed season for the Orange. They finished 8-8-2 overall, but only picked up two wins in ACC play. The two victories were massive, though, with Virginia and Clemson both deposited. Head Coach Ian McIntyre will hope that the two wins are a sign of things to come, as Syracuse returns a talented roster this fall. Although star striker DeAndre Kerr inked a pro deal with Toronto FC, Seattle transfer Levonte Johnson has shown the kind of goalscoring chops that will certainly play in the ACC. Promising sophomore Curt Calov could take a leap with more minutes.

Last fall was a rough year for the Hoos. It won its first two games but didn’t snatch its third victory until the end of September. The bigger picture isn’t pretty; the Hoos haven’t made an NCAA tournament appearance in two years, and have fallen out of the national picture. This year's squad will look to change that, and there are certainly players that can make an impact. Top scorer Leonardo Afonso — one of the best forwards in the conference — is back in the fold. So too is reliable defender Andreas Ueland. They will also look to a top five ranked recruiting class to bolster the team.

Coming off their sixth straight NCAA Tournament appearance, the Hokies appear well-equipped for another successful season. They welcome back some serious attacking talent, including marauding full back Kyle McDowell and reliable goalscorer Conor Pugh. Center midfielder Mayola Kinyua is also a vital midfield piece. The big challenge, though, will be how to compensate for the loss of Jacob Labovitz. The senior forward spurned his extra year of eligibility, declaring for the MLS SuperDraft. He accounted for almost 25 percent of the team’s goals last year.

The Deacons were as competitive as ever in 2021, advancing to their sixth straight sweet 16. And it’s a safe bet to have them back among the conference’s best again. A lot of quality returns to the lineup, including all-conference talent Omar Hernandez and experienced defender Garrison Tubbs. Forward Babacar Niang is also back in the fold. A four star recruit, he saw his freshman campaign derailed by injury. Now fully fit, he could have a massive impact. Head coach Bobby Muuss also used the transfer portal wisely, bringing in talented midfielder Sidney Paris. Another NCAA Tournament appearance seems to be in the bag, with a deep run possible.