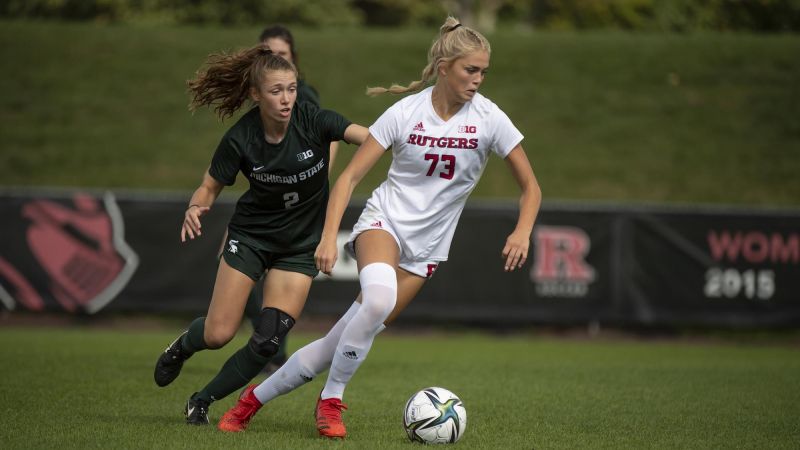 The Big Ten appears to be a top heavy conference, with three clear favorites, all of which are capable of playing well into November.

And in many ways, that’s true. Rutgers appears to be as strong as ever, with the excellent Riley Tiernan among the best forwards in the nation. Michigan, meanwhile, has some attacking firepower, as well as an experienced back line. Also in the mix is a resilient Penn State side. The Nittany Lions have brought in the no. 1 recruiting class in the nation, highlighted by three elite transfers. If any of those three teams can get hot at the right time, the battle for first place — and the conference tournament — should be enthralling.

But there are some compelling storylines further down the standings. Purdue will have to figure out how to score goals following the loss of Sarah Griffith. Michigan State could take a step after a promising 2021 season. And last-placed Maryland looks a squad renewed, led by a new coach and buoyed by a lengthy list of transfers.

2022 certainly won’t be a boring season. Here’s a look at every team.

Illinois proved last year that its attack can do some serious damage. There were drubbings of Mizzou, Illinois State and Bowling Green, spearheaded by a dynamic forward line. But it was too leaky at the back, conceding 14 goals across its last four games. Shoring that up will be a priority in a Big Ten full of top strikers.

Indiana enjoyed a solid season in 2021, steadily picking up wins and navigating a tricky nonconference slate. Things took a turn for the worse in October, though, as the Hoosiers didn’t win any of their last five games, burying their Big Ten Tournament hopes. Last year’s defense was excellent, as the Hoosiers only conceded 12 goals all season. Going forward, though, was a different story. 23 goals in 18 games wasn’t a horrific return, but its lack of attacking power was fatal down the stretch. The good news is that the top goalscorers return in 2022. If they can find the net with a bit more regularity, this could be a far more balanced team.

If Iowa had one or two more away games last year, it would’ve probably been playing in the NCAA Tournament. The Hawkeyes were stellar at home, going 7-1-1 in Iowa City. They weren’t quite as consistent on the road, though, notching a 5-4-1 record. Away losses to Michigan State, Purdue and Indiana were particularly damaging to their tournament credentials. Still, this appears to be a better and more experienced team than the one that came just short in 2021. The top five minute-getters all return, as does the promising sophomore forward Kenzie Roling. A Big Ten Tournament run appears well within reach, as does an NCAA Tournament berth.

After finishing winless in Big Ten play last year, Maryland parted with head coach Ray Leone and employed Rutgers assistant Meg Nemzer. The new coach is a Maryland native and seems to be a good hire. She had a busy offseason, adding nine transfers to bolster the squad. Although those newcomers will undoubtedly improve the squad, it will likely take a few years for Maryland to push up the standings. For a team that has only made the Big Ten Tournament once, improvement is key. Nemzer will hope that 2022 is the start of something.

The Wolverines have followed up on an elite eight appearance with their highest preseason ranking ever. But it might not be that simple for Michigan. It has lost two of its best goalscorers while starting keeper Hillary Beall has also graduated. Star defender Sydney Shepard, too, has moved on. But there was some serious depth in the squad last year, and some experienced players are slated to return. Meredith Haakenson is back for a fifth year, and figured to play a big role in midfield. Meanwhile, promising forwards Dani Wolfe and Sami Woods also return. If the Wolverines can get some solidity in goal sorted, they should be among the best once more — though there might be some growing pains along the way.

Michigan State was a tough team to figure out in 2021. It picked up five wins in Big Ten play, including a 1-0 victory over Ohio State. The Spartans lived off their excellent defense, only conceding 12 goals all season. Star goalkeeper Lauren Kozal returns to anchor that unit, but some of the spots in front of her will need figuring out. If she has another big year — and the Spartans can find the goal more consistently in the absence of Ava Cook — Michigan State will be one to watch.

The Gophers continued to improve in 2021, going 8-6-2 while playing out a tough schedule. They got some big performances from young players, including All-Conference standout Sophia Boman, who tallied eight goal contributions as a sophomore. The key will be results against big teams. Minnesota didn’t register a win against a ranked opponent last season. Picking up points in those games could push it closer to an NCAA Tournament spot.

Nebraska faces a challenge to push back up the Big Ten. The Cornhuskers flirted with a .500 record last year, but ultimately failed to close out the season. Ties against Michigan State and Maryland stymied progress. But there’s more to get excited about this season. Most of the team’s top attacking options return to the fold, while some stability in goal figures to solidify the defensive set up.

Northwestern worked through a mixed season last year. There were some major positives, such as a 2-1 win at Penn State. But the Wildcats lost their last five contests, running out of steam down the stretch. But there’s reason to believe that this squad might have a little more mettle. Almost all of that squad is due to return — including all-conference pick Josie Aulicino. Coach Michael Moynihan has added a few transfers to give the squad a boost, too.

The Buckeyes strung together a series of results in Big Ten play, finishing at .500 in the conference. It was enough to earn them an NCAA Tournament berth. And although Ohio State was beaten handily, a lot of that squad returns this year. The key will be ensuring that Kayla Fischer continues to score. If the senior can lead the line again, the Buckeyes might have another run in them.

Penn State wasn’t far off the pace last season, and has brought in the personnel to bridge the gap. The Nittany Lions used the transfer portal expertly, snagging Olivia Smith, Cassandra Hiatt and Penelope Hocking. Smith is an exciting talent, the youngest player to ever appear for Canada’s senior side. She was due to play at Florida State this fall, but the Nittany Lions coaxed her to Pennsylvania. Hiatt impressed in four years at Texas Tech, earning an All-American nod in 2019. Hocking is the biggest coup, though. The former USC forward is one of the best forwards in the country, and is good for at least 10 goals. Though senior captains Kerry Abello and Sam Coffey graduated, the Nittany Lions appear to be a better side than the one that lost in the sweet 16 last year.

The Boilermakers had one of the best attacks in the Big Ten last year, largely due to the excellent Sarah Griffith. The NWSL draftee bagged 16 goals and added six assists to carry Purdue to the NCAA Tournament. Her graduation casts doubt on the 2022 season. Head coach Drew Roff will now have to alter his forward line — and figure out where the goals come from. There are similar questions at the back, following the departure of All-Conference keeper Marisa Bova. Roff certainly has some talent to draw from. Piecing it together will be crucial.

The Scarlet Knights made a run to the 2021 College Cup, and most of that squad has returned. They have brought back nine starters, including Big Ten Freshman of the Year Riley Tiernan. The midfielder helped lead Rutgers to a perfect run in conference play, going 10-0 in the regular season. Add to that a solid recruiting class, and there’s no reason why Rutgers can’t be playing in early December.

The Badgers enjoyed a successful season in 2021, navigating the Big Ten and clinching an NCAA Tournament berth. They were tough defensively, conceding just over a goal per game while keeping 10 clean sheets. Star goalkeeper Jordyn Bloomer has since graduated, but other key pieces remain. If Wisconsin can figure out the goalkeeper situation, it could be in for a deep run.