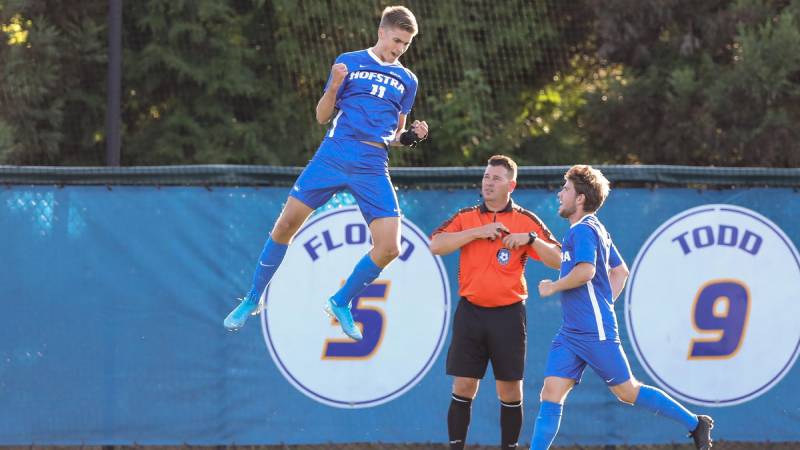 What happened in 2021: Lipscomb and Central Arkansas split the 2021 regular season title after finishing the season tied on 15 points. The two sides also battled it out for the conference tournament title, with Lipscomb winning 4-1. The Bisons couldn’t continue that form into the NCAA Tournament, though, losing to Hofstra in the first round. Alberto Suarez claimed Player of the Year honors after posting eight goals from defense.

What to expect in 2022: Lipscomb appears well-equipped to make another run to the NCAA Tournament. Preseason Player of the Year Tyrese Spicer had an excellent sophomore year, tallying 15 goal involvements; he’ll look to improve on that this year. Central Arkansas looks weaker than last year but should also push Lipscomb. Queens (N.C.) joins the conference for their first year in Division I soccer. It’ll be interesting to see how it fares in its first year.

What happened in 2021: The America East has quietly become a very competitive conference in the last few years, highlighted by a tough New Hampshire side. The Wildcats won their third straight conference title and advanced to the third round of the NCAA Tournament. Vermont was also competitive, pipping New Hampshire in the conference tournament championship match to win their first tournament crown since 2015. UMBC's Taylor Calheira scored nine goals in a breakout season for the Retrievers.

What to expect in 2022: The Wildcats are well-placed to win the conference again, especially with prolific striker Tola Showunmi returning. Midfield duo Yannick Bright and Rory O'Driscoll are also back in the fold and should bolster the team’s title credentials. Vermont will look to make some noise but appears to be weaker than last year. If Calheira recaptures some of his 2021 form, UMBC could have a better year.

What happened in 2021: Tulsa dominated the AAC in 2021, winning eight of its 10 games, with a freak 3-2 loss to UCF standing as its only defeat. Tulsa got its revenge in the conference tournament championship, though, beating UCF, 2-1. The Knights established themselves as a good goalscoring side, especially with the prolific Lucca Fourado leading the line. But defensive lapses saw them finish second. Knut Ahlander continued to dominate as one of the best midfielders in the conference, bagging seven assists while playing almost every minute for SMU.

What to expect in 2022: The American has expanded in 2022 and has therefore become far harder to predict. Tulsa and UCF have both stayed — resisting the lure of the newly reformed Sun Belt. And despite the influx of talent brought by Charlotte, Florida Atlantic and Florida International, Tulsa should be the top pick again. Gino Vivi is one to watch. His creativity could take South Florida far.

What happened in 2021: The conference expanded again after a Covid-19 stunted season. Saint Louis rolled through its schedule, going undefeated while only conceding seven goals. It won the conference tournament title en route to an NCAA Tournament quarterfinal run. Rhode Island and Saint Joseph's were also in the mix, but neither could keep up with the Billikens. Seven A-10 players were selected in the MLS SuperDraft at season’s end.

What to expect in 2022: It’s difficult to see anyone but Saint Louis topping the conference. Though the Billikens lost a few key players, they’ve brought in a good group, and have some talented bench players waiting in the wings. Rhode Island should be in the mix again, largely thanks to the return of exciting forward Patrick Agyemang — who could be playing in the pros by next year. Newcomers Loyola-Chicago will look to make some noise and have a top defender in Michael Hong. But it might be a tricky first season for the Ramblers.

What happened in 2021: Campbell got hot early in conference play and stayed in control. It went 7-0-1 across the eight games, then won two more to bag the tournament title. The Camels were dominant going forward, scoring 55 goals while only conceding 22. High Point had some moments of its own, but two narrow losses against Campbell denied its NCAA Tournament opportunities.

What to expect in 2022: Most of Campbell’s best goalscorers return, including Tyler Young and Jalen James — who missed the tail end of the season with injuries. Although High Point has retooled, the Camels appear best equipped to win the conference once again.

What to expect in 2022: this year is poised to be close once again, with both squads retooling with some intriguing talent. The Anteaters will be carried by an exciting midfield that includes reigning Newcomer of the Year Francesco Montanile. The Gauchos, meanwhile, have dipped into the transfer portal, bringing in Hamburg striker Joe Sherbourne and former Lander defender Timon Windisch. Both sides look deep and should fight it out for the top spot once again.

What happened in 2021: Hofstra clinched the regular season conference title, rebounding from a slow start to collect seven points from its last three games. Northeastern was in the mix but a late season loss to Drexel derailed its chances. The Pride were far more convincing in the conference tournament, clinching an NCAA Tournament berth after beating Elon in the conference tournament championship. Hofstra won two NCAA Tournament matches, including a famous 8-2 thrashing of Penn State in the second round.

What to expect in 2022: Hofstra is a solid bet to go on another run. The Pride have a star player in Mac Hermann Trophy finalist Hendrik Hebbeker and can also turn to Michael Carmichael if they need a goal. UNC Wilmington and Elon both return some talent but will need to pick up points against Hofstra — and be flawless elsewhere — to push for a conference title.

What happened in 2021: Oakland narrowly won the conference in 2021, edging Cleveland State by just one point. It also captured the conference tournament crown, beating its league rivals, 3-1, in an exciting final.

What to expect in 2022: It’s been a busy offseason, with coaching changes at both Northern Kentucky and IUPUI. Tom Poitras could be an excellent hire for a talented NKU squad, which failed to deliver on the intrigue of a talented roster last year. If he can get the team firing, they will be hard to beat. Oakland might struggle going forward after the departure of Noah Jensen. But it still has top goalscorer Mikey Ketteman to lean on. While Cleveland State will challenge again, the conference appears to be Oakland’s to lose.

What happened in 2021: The Ivy League returned to action in exciting fashion in 2021. Princeton enjoyed the best season in recent history, sweeping its schedule for a perfect 7-0 league record. Kevin O'Toole led the charge for the Tigers, establishing himself as a classy center midfielder. Elsewhere, Harvard, Yale and Cornell were both tough to beat, but couldn’t find the consistency required to compete for the top spot.

What to expect in 2022: The conference appears to be a little more open in 2022. Princeton lost its top player in O’Toole, while Yale and Harvard both have young cores to build around. Yale will hope that striker Paolo Carroll will take the next step in his senior year — improvement from him could see them compete for the top spot. Harvard will look to exciting sophomore Alessandro Arlotti to propel their attack.