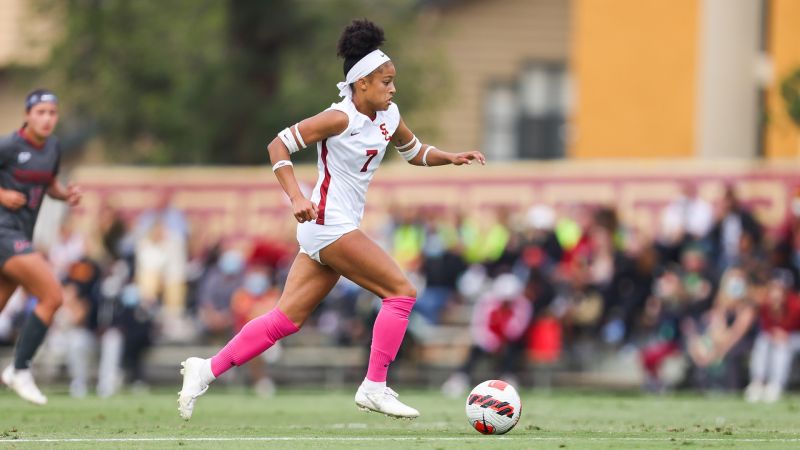 The Pac 12 seemed fairly easy to predict after the 2021 season. It figured that USC and UCLA would be at the top, led by some of the best coaches in the conference. But when USC’s Keidane McAlpine left for Georgia and UCLA’s Amanda Crowell assumed the helm at Ordland Pride, things changed.

The two Los Angeles powerhouses are led by first time head coaches. And although both have Pac 12 experience, there are bound to be some growing pains. Outside of the favorites, Stanford will be looking to break back into the conference’s elite, while Washington State is hoping to continue its recent run of top four finishes.

Some other teams stand out further down the standings. California could be ready to take a leap and Oregon narrowly missed out on an NCAA Tournament berth last year. Arizona State is also one to watch, especially with star striker Nicole Douglas returning for another year.

Here’s a full rundown on the conference, with a look at every team.

2022 will likely be a rebuilding year for the Wildcats. They had some good moments in 2021, but struggled mightily to find the back of the net — only scoring 15 goals all season. And now, with top goalscorer Jill Aguilera gone, offense might be even harder to come by. Arizona will need someone to step up if it is to climb out of the Pac 12’s basement in 2022.

The Sun Devils have one of the best goalscorers in the country in Nicole Douglas. The London native bagged 19 last year, while also adding seven assists. For head coach Graham Winkworth, it’s a question of putting the pieces together around her. He will have to deal with a few key departures, not least defender Jayda Hylton-Pelaia, who was drafted by the Chicago Red Stars. Other defensive talents remain, though, so restructuring might not be too tough.

There will be a lot of familiar faces in Cal’s starting XI next year. Most starters opted to use their extra year of eligibility to stay in the Bay Area, keeping an tight-knit group together for at least another season. That could be a big boost for a team that couldn’t quite find consistency in Pac 12 play. A trio of away matches at Stanford, UCLA and USC stalled momentum late in the season, and buried its tournament hopes. But none of those losses were particularly convincing; the Bears couldn’t quite perform in key moments. This largely unchanged group might be ready to turn those losses into wins.

2021 proved that there are some goals in this Colorado side. The Buffaloes scored 34, with the duo of Shanade Hopcroft and Shyra James leading the way. Hopcroft and her 16 goal involvements have moved on, but James is still around. Alli Palangi should also benefit from some more minutes on the pitch. The midfielder was a highly-regarded recruit and started to find her groove last year. Things get tricky at the back. The Buffaloes conceded 31 goals last year and kept only one clean sheet in conference play. A solid defensive setup is a must.

The Ducks were perhaps unlucky not to earn an at-large bid to the NCAA Tournament last year. However, struggles against ranked teams derailed their chances. Winning those games will be crucial as Oregon looks to take the next step. The talent is certainly there. All-conference goalkeeper Leah Freeman returns, as do Zoe Hasenauer and potential breakout candidate Kess Elmore. A tricky three game stretch of Washington, UCLA and USC in late September should be a real test. If Oregon can snag some points from that trio, it has a real shot at an NCAA Tournament berth.

Between five seniors and three grad students, there’s certainly some experience for Oregon State. But it will also likely rely on some key younger contributors. That method served the Beavers well in 2021, with McKenna Martinez establishing herself as one of the best freshmen in the conference. Others will need to step, and Amber Jackson could be one to do so. The junior scored in four straight matches in late August but ran out of steam down the stretch. Getting her into a goalscoring rhythm will be a difference maker for the Beavers.

It was unusual to see a Stanford side lose so many games by small margins last year. The Cardinal was imperious at home, going 10-1 at Cagan Stadium. They struggled on the road, though, suffering one-goal defeats to three ranked opponents. And now, two crucial pieces of the squad have gone, with Naomi Girma and Belle Briede snagged by the NWSL’s San Diego Wave. The good news for the Cardinal is that most of the squad is due to return. Reinforcements are on the way, too, with eight freshmen joining the program. No. 1 recruit Elise Evans should fit in right away, while the remaining seven all have national team experience. For Coach Paul Ratcliffe, the player pool is certainly there.

UCLA made one of three major coaching hires in the Pac 12 in the winter, snapping up highly-regarded Stanford assistant Margueritte Aozasa to lead the program. Aosaza appears to be a good fit, thanks largely to her impressive resume of developing west-coast talent — the exact profile of player she will be coaching at UCLA. The Bruins are a smart pick to win the conference. Their incoming freshman class is the no. 1 in the nation, and features seven top 25 recruits. Furthermore, the Bruins have some of the best players in the conference returning to a side that only lost once last year. While there might be some growing pains with any new coach, this group certainly has the talent to make a run.

The Trojans have also welcomed a new coach to the fold, bringing in Jane Alukonis to replace departing Pac 12 Coach of the Year Keidane McAlpine. Alukonis is a local hire, having spent four years at UCLA. She’s also well-connected with the club scene and should be able to court some of the best youth talent in the area. Her roster is a little hard to project. Forward Penelope Hocking has transferred to Penn State, while…. But star midfielder Croix Bethune is still around, and will likely only improve. Alukonis has also brought in some transfers of her own, adding All-Conference talents Nicole Payne and Brandi Peterson to strengthen the defense. With those two at the back, the Trojans will likely compete for a Pac 12 win once again.

2021 was one to forget for the Utes. All seemed to be going well until a 7-0 thrashing at the hands of USC derailed the season. They lost their last four games, and ended the campaign with only one Pac 12 win. Utah never found a regular source of goals, so sorting that out — or at least, improving — appears to be the immediate issue. There’s talent in the ranks, and a couple of recruits — including four star Kelly Bullock — should help immediately.

Washington is a difficult team to figure out this year. The loss of three key players — including reliable goalscorer Olivia Van der Jagt — suggests it might struggle. But the roster also has some real potential. Keeper Olivia Sekany is reliable between the sticks, Summer Yates was an All-Pac 12 First Team honoree last year. A trio of experienced transfers should also add some quality. Picking up points against some of the conference’s big hitters will be key, but head coach Nicole Van Dyke has shown she can lead the team to some big wins.

Washington State navigated its slate calmly in 2021, living off a defense that was among the nation’s best. The Cougars conceded only 13 goals across 21 games and they also tallied 13 clean sheets. Some of that core returns, including All-Conference defenders Mykiaa Minniss and Bridget Rieken. Meanwhile, reigning Pac 12 Freshman of the Year Nadia Cooper returns in net. There are some question marks up front, but Grayson Lynch — who scored eight goals in 2021 — is also back. Holding off a rejuvenated Stanford side will be crucial if the Cougars are to remain among the Pac 12’s best.