Rock Hill, SC – On a cold, rainy day that evolved into a colder, rainier evening, 10 men's college teams played 2 games in a single day (March 25), seeking to capture the treasured Manchester Cup. For the second consecutive year, Charlotte won with 2 victories and goal differential of 4 beating out UNC-Wilmington by a single goal in the differential.

The standings are based upon 3 points for a victory, 1 point for a tie and 0 points for a loss. The next tie-breaker is goal differential, most goals scored, and finally fewer goals allowed.

Here are the standings for the 2011 Manchester cup: 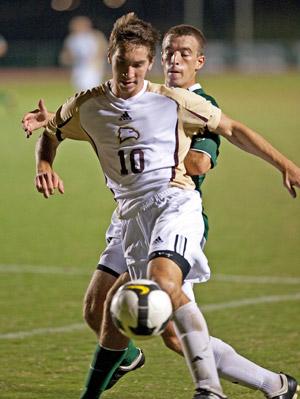 Adam Skonicki, Winthrop
Here are the final scores from each of the games:

About the Manchester Cup

The set-up for the tournament is 35 minutes halves, 6 minutes for half-time with unlimited substitutions. The games are played on two adjoining fields with bleachers between the fields. The bleachers are configured enabling fans to sit at the top and watch either game by a simple head turn. Brilliantly, the games are staggered approximately 30 minutes apart. During half time and warm-ups, I could watch the other game. The only downtime is a 90 minute break between the two sessions while there normally are two high school games. However, these games were canceled this year because of the inclement weather. Did I mention that it was cold and rainy? No, really cold and rainy!

Keep following TopDrawerSoccer.com as Joe Mauceri analyzes player performances from the Manchester Cup Spring College Tournament and other college and Development Academy matches. We are proud to welcome Joe back as part of the TopDrawerSoccer.com team.