As the seven members of the 2013 Generation adidas class prepare to join Major League Soccer during Thursday’s draft, part two in our historical look at the program examines the best players and classes produced in the program’s history. Be sure to read part one. 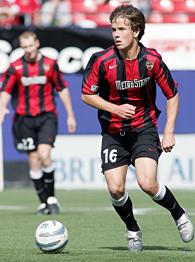 The 16 classes have certainly yielded some great players, from Josh Wolff, Ben Olsen – now coaches in MLS – to European players like Clint Dempsey, Tim Howard and Michael Bradley, to name just a few.

A strong argument can be made as well for 2003. While it didn’t unearth many national team regulars, MLS clubs have counted on the services of Logan Pause, Eddie Gaven, Mike Magee and Brian Carroll ever since the group entered the league.

However, the Dempsey-Bradley class of 2004 has the honors. While the average minutes played in MLS are fourth overall, a lot of that can be attributed to Dempsey’s and Bradley’s moves abroad. The class was comprised of ten players, nine of whom carved out what can be deemed moderate to extremely successful careers to this point, the lone.

It also included Freddy Adu, the enigmatic midfielder whose career probably will never match the fanfare that greeted him during his arrival, yet statistically his numbers earn him the honor of being an adequate pro. Overall, only three of the ten players from 2004 aren’t currently active as this year, with Chad Marshall and Ned Grabavoy remaining solid MLS contibutors and Clarence Goodson currently on the fringe of being a U.S. national team regular. A small sampling of MLS stats from that class can be seen below.

Could any of the more recent classes end up knocking off 2004? There’s a lot of talent in the 2010 group with a lot left to prove, including Sean Johnson, Teal Bunbury, Jack McInerney, Danny Mwanga and Amobi Okugo. It’s hard to imagine any of those players surpassing the accomplishments of a Bradley or a Dempsey, although paying tribute to Generation adidas for achieving that alone is a stretch – both are extremely motivated and hard-working players.

There is also a lot of potential in the 2011 class. Perry Kitchen and Will Bruin have enjoyed promising starts to their careers, while Zac MacMath, Darlington Nagbe, Omar Salgado and Kofi Sarkodie could continue to develop into top tier talent. The loss of perhaps three players (Michael Nanchoff, Corey Hertzog and Michael Tetteh are all currently without clubs) is sure to knock back that assertion, however.

Chances of success for 2013

After looking at the historical numbers, those percentages of past success can certainly be applied to the upcoming class. In that sense, 58% of the seven players in the current Generation adidas class have a chance at becoming, at minimum, a solid pro in MLS. But that’s where the statistical analysis ends, and the player’s talents take over, along with getting drafted into the right situation.

On the other hand, the remaining quartet of Andrew Farrell, Walker Zimmerman, Eriq Zavaleta and Mikey Lopez are all able and eligible to represent the U.S. on the international level, and the latter three have done so at one point or another at the youth level, the lone exception being Farrell.

For these seven, a lot of their overall success comes down to the type of team they end up on, and how often then can play in 2013. One of the issues with MLS at the moment is the lack of playing time available for younger players between the ages of 18-22 – the range that all of these guys fall within – and what team ends up drafting these players will at least in part dictate how successful they will be at the professional level.

A look down the road

Perhaps the biggest takeaway from the 2013 class is how big it is – the seven players signed equals the smallest total of a Generation adidas/Project 40 group since 2002.

Pointing to the emergence of Homegrown players, various media reports suggest that funds normally earmarked for past GA signings are instead being shifted towards signing Academy graduates either before college, during college, or after a player has completed his four years of eligibility.

Three concrete examples of this are evident in Gyasi Zardes (CSU Bakersfield), DeAndre Yedlin and Wil Trapp (both from Akron), who signed with MLS clubs before completing college. Players of that caliber would certainly have been considered for GA deals in the past, but instead are now signed directly to the first team of their respective MLS Academy

Down the road, the number of GA players could continue to dwindle, as money is diverted elsewhere and the changes of youth development in American soccer become more prominent. Regardless of what happens, the program has certainly left a mark on the soccer landscape, with a varying amount of success over its relatively short history.