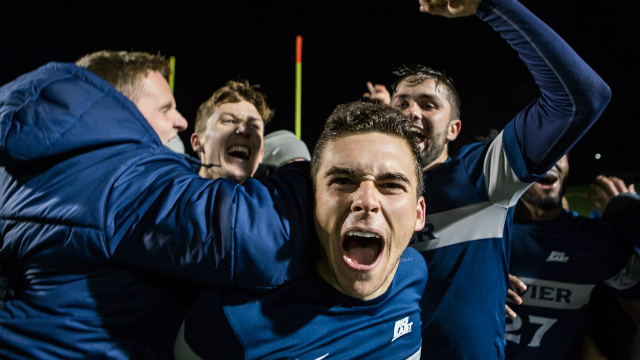 A 54th minute goal from freshman Joe Bell secured a win for Virginia, edging Notre Dame by a 2-1 score in the ACC semifinals.

Robin Afamefuna cracked open the scoring in the 38th minute for the home side, beating Irish goalkeeper Chris Hubbard at his near post. Notre Dame tied the game three minutes after the break when Jon Gallagher glanced a pass from Thomas Ueland past Virginia goalkeeper Jefferson Caldwell.

Bell restored Virginia’s lead for good six minutes later, capping off a tremendous run to the sideline by Edward Opoku. That, combined with a couple of nice saves by Caldwell, secured Virginia’s spot in the final.

UVA’s opponent in Sunday’s final, to be held in Charleston, S.C., will be top seed Wake Forest. It was senior star Jon Bakero at the heart of Wednesday’s victory, as he scored the winner in the 79th minute of a 2-1 win against Clemson.

The senior collected a headed clearance from Tiger goalkeeper Ximo Miralles a few steps inside the midfield circle. Wasting no time, he calmly slotted the ball into an empty net to put Wake back in front.

Bakero was also credited with the assist for Wake’s opening goal, as he created space for a shot in the 32nd minute. Miralles made the save, but freshman Omir Fernandez was alert, slotting home the rebound to make it a 1-0 lead.

Clemson’s Saul Chinchilla answered with a goal in the 70th minute, but defender Justin Malou was sent off six minutes later, making it an uphill task for the visiting side.

Another conference tournament set its field on Wednesday, as the Big East final will take place in Washington, D.C.

Georgetown will host Xavier, after the latter upset top-seeded Butler on penalty kicks. The Hoyas edged St. John’s by a 2-1 score at Shaw Field.

It took a frenetic rally from Butler on Wednesday to even push the game into spot kicks. Xavier took a quick-fire 2-0 lead in the second half when Cory Brown and Matt Vasquenza tallied in the 72nd and 76th minute. But it didn’t take very long for the Bulldogs to pull it back to 2-2, when Kieran Geldenhuys and Joe Moulden scored twice in the span of five minutes.

When the dust settled, all four goals were scored in just 11 minutes. The drama wasn’t finish, however, as Xavier had a chance to win the game from the penalty spot in the first minute of overtime. Big East Goalkeeper of the Year Eric Dick saved Vasquenza’s spot kick, and the resulting overtime periods were scoreless.

Xavier took care of business during the penalty shootout, converting all four chances from the spot to win it 4-1.

XAVIER IS ON TO THE #BEfutbol CHAMPIONSHIP!

Earlier in the day, Georgetown managed to emerge in a tightly contested clash against St. John's. it was a dream start for the Hoyas when Achara glanced home the opening goal from a Declan McCabe cross 74 seconds into the game.

From there, the Hoyas had a couple of good chances to extend the lead, misfiring in front of goal as the Red Storm clamored their way into the game. Filippo Ricupati missed a glorious chance in the second half to tie it, hitting the post from just outside the six-yard box.

The miss proved costly when freshman Derek Dodson made it a 2-0 game in the 66th minute, glancing home a Chris Lema corner kick from just in front of goal. St. John's ensured it would be a nervy finish when Harry Cooksley scored to make it a 2-1 game with 13 minutes to go.

But the Hoyas held on, and are rewarded with the chance to win a trophy on home turf this Sunday.