The talent in the ACC is as good as it ever has been, as the programs that have been near the top of the men’s standings for the past five years – Maryland, Duke, Virginia, Wake Forest, North Carolina all look as good as ever.

Whatever teams emerge at the top will also likely carry the label of national title favorites, as four out of the last five national champions are all from the ACC.

Here’s a look at how things are shaping up in one of the nation’s best conferences:

The revolving door that hits national champion teams struck the Tar Heels in full force, and the team is hard at work in the preseason trying to figure out how to cope with significant losses, like Ben Speas and Billy Schuler in attack. 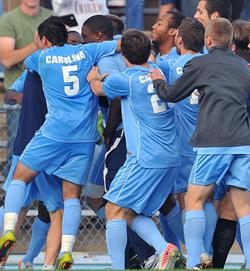 Will UNC celebrate another title this year?

An injury that looks to keep attacker Robbie Lovejoy out means the team returns just 7 goals from last year’s whopping total of 58. And the team is well aware that the ACC won’t be accommodating to a slow start.

“Every game is going to be hard this year, and our expectation is that if we don’t work extremely hard and we don’t try to get better every single day, the conference is very unforgiving,” head coach Carlos Somoano told TopDrawerSoccer.com. “So that’s what we’ll do, give it the best we can and see what happens.”

Somoano does have faith that the team has the right pieces in place, it’s just a matter of unlocking the right combination quick enough. The team is good enough at the back, retaining midfield stalwart Mikey Lopez, central defender Boyd Okwuonu and goalkeeper Scott Goodwin.

If a player of Danny Garcia’s caliber can step up and shoulder the goal-scoring load, it’s impossible to count the team out.

The Terrapins are in a pretty good spot heading into a new campaign – they’ve lost a significant bit of talent (Casey Townsend, Alex Lee) – but have plenty of experience left to cope with those departures.

A senior trio of defenders London Woodberry, Taylor Kemp and midfielder John Stertzer are crucial to Maryland’s annual lofty ambitions. Junior forward Patrick Mullins is also a big piece of the puzzle as well, as he’ll be needed to help replace Townsend’s goals.

Once again, the talent in this group is evident; it’s just a question of whether or not they can put it all together at the right time.

After his 2011 season was cut short because of an ACL injury, forward Will Bates is back and ready to cap off what has been a solid career.

His health is a big concern, as a lot of the goals are set to go through him. However, the team is a bit on the young side, as Bates and Ari Dimas are the two long fourth year players on the team. Ryan Zinkhan was the team’s best first-year player last year, and he’ll look to improve in year two.

How youngsters like Zach Carroll, Brian James and Marcus Salandy-Defour can adapt in their first year is set to determine a great deal about how competitive Virginia can be.

Another young team in the ACC is the Blue Devils. After losing goal scoring extraordinaire Andrew Wenger to the professional ranks, and leading assist-man Chris Tweed-Kent, offense is a high priority in preseason as the team lost two players who combined for 23 goals and 20 assists.

Midfielder/forward Nick Palodichuk, who scored 8 goals and added 6 assists as a freshman last year, is going to be a key fixture in replacing Wenger’s lofty numbers. Freshman forward Luis Rendon is coming off injury but could have an impact.

The spine of the team remains somewhat intact at the back, as senior goalkeeper James Belshaw is one of the best in the nation, while central defender Sebastien Ibeagha has two seasons under his belt. He’ll be joined along the back line by promising defender Jack Coleman, transferring from Indiana.

Expectations are continuing to rise down in Winston Salem, and the combination of an experienced team and tremendous recruiting class could mean big things for the Demon Deacons this fall.

The experienced players like Andy Lubahn, Jared Watts and Anthony Arena, will certainly pushed and improved by the incoming freshmen class, that includes U20 MNT midfielder Collin Martin, center back Jalen Robinson, and the talented forward Michael Gamble.

It has the proper ingredients for a special season on the field, and Jay Vidovich has every right to be optimistic.

Despite a middle of the pack finish in the standings, the Eagles have a roster that can compete in conference this season, as evidence by last year’s overall record and ACC tournament win against Maryland.

Forward Charlie Rugg and midfielder Kyle Bekker will lead the team’s attack. The two are both members of an experienced team that consists of seven seniors. Along with Rugg and Bekker, goalkeeper Justin Luthy and defender Stefan Carter are looking for a successful finish to their collegiate careers.

The Tigers managed a strong finish to last season after a rocky start with just one win in the first five games.

And there’s a lot of young talent on Clemson’s roster that are likely to help the program move forward, including Brynjar Benediktsson, Austin Savage and Amadou Dia.

Optimism reigns for the Wolfpack at that start of another season as they look to make strides in the crowded and talented ACC landscape.

“Everyone’s always excited in preseason,” head coach Kelly Fuller told TopDrawerSoccer.com. “You always feel like you finally have the players you’ve been recruiting for a year, and they’re all there and everything is kind of fresh and exciting.”

In order for NC State to be as pleased at the season’s end as they are at the start of it, they’ll need a stronger finish to the year after losing five our of their last six on the season.

They return an experienced yet young team, however, led by junior forward Nazmi Albadawi and sophomore defender Matt Ingram. The raw yet talented Monbo Bokar is a wildcard – if he can come good and assert himself, perhaps we’ll see a strong challenge from the Wolfpack.

The Hokies need to take two big steps forward in a couple of areas on the field in order to see any sort of improvement in 2012. The first, and probably more critical, is score more goals, as the team managed just 15 in total and no players scored more than two.

The second improvement is finding a way to get positive results on the road, as they went 0-8 outside of Blacksburg. With only one senior on the roster this year – midfielder David Fiorello – this season is likely about continuing to try and build the program under third-year head coach Mike Brizendine.