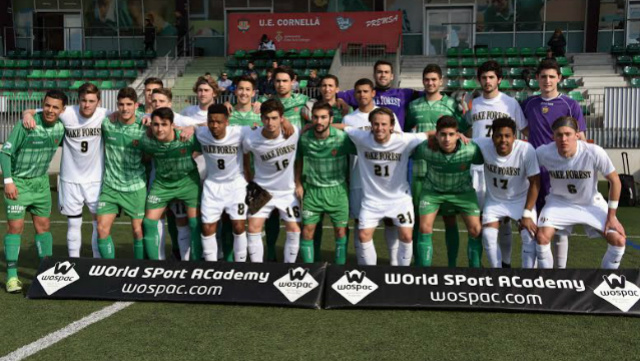 Wake Forest’s first match since its NCAA Quarterfinal loss against Stanford came against a very unusual opponent: a U18 trialist squad from Atletico Madrid.

Not a bad way to spend a spring break.

The men’s program traveled to Spain from March 4 to March 13, looking to lay the foundation for an even deeper run later this year.

“First off it was just an unbelievable opportunity. Really a trip of the lifetime in so many ways,” Wake Forest head coach Bobby Muuss told TopDrawerSoccer. “I do think it was able to bring the group together, spending a lot of time together to experience some of the things that they were able to experience together, hopefully will pay dividends long term.”

Stopping in Madrid and Barcelona, the Demon Deacons played three games in four days, with the match against the side from Atletico augmented with clashes against Real Madrid’s U18s and UE Cornellá’s U19s.

Prior to the match against Cornellá, the players and staff had the unique opportunity to watch Barcelona’s first team training. That came together thanks to Jose Mari Bakero, the father of Wake forward Jon Bakero and a former standout at the Catalan club.

Muuss thought the games in Spain were adequate, especially in the context of their first time competing this year. Along with the soccer side of things, Wake Forest enjoyed the usual slate of soccer-related tourist activities: touring the Bernabeu (Real Madrid’s stadium), catching La Liga matches like Real Madrid vs. Celta and Barcelona against Getafe.

Back in the United States, the team has lined up played its way through three games against DI schools, securing wins against Virginia Tech, UNC Greensboro and Kentucky over the past few weeks.

“We want to get better collectively, but we definitely want to see one, two, three guys take the step, to say ‘okay this was my role last year, and I want to have an increased role next fall because I’m getting better, I’ve bought in and I’m learning’,” Muuss said. “I think we’ve seen that from a handful of guys this spring.”

Two more games are left on Wake's spring schedule, as they'll play at Elon on April 9 and host VCU on April 16.

Vidovich settles in at Pittsburgh

No bigger coaching move took place in the Diviision I men’s soccer ranks than Jay Vidovich’s arrival at Pittsburgh.

A long struggling program that last won a conference game in 2011 (when they were still in the Big East), the storied caretaker is laying the groundwork for Pitt’s future success this spring.

Vidovich, who is back in the ACC and the college ranks after spending 2015 as the head coach of T2 in the USL, admitted that a lot of work lies ahead as he gets to know the current roster.

“I’ve noticed that our guys are working very hard to try and improve,” he said. “There’s a lot of new stuff thrown at them that they’re trying to execute… We’re behind for sure with the top ACC programs, but we’re trying to close that gap as quick as possible."

Along with the spring slate, Vidovich and his new staff (assistant coaches Jeff Negalha and Michael Behonick were hired in January) are working to see what they can add to the 2016 recruiting class as they look to build a high-level ACC program.

U.S. U17 vet impressing at Clemson

Getting an early start to a college career can always provide a leg up for any Division I player.

U.S. U17 men’s national team defender Tanner Dietrich began his career at Clemson as a spring enrollee, impressing Mike Noonan and the rest of the staff so far.

“The last one that [enrolled early] was Andrew Tarbell, and obviously he was very successful and progressed well throughout his career,” Noonan told TopDrawerSoccer. “The intangible pieces of Tanner in terms of his leadership and maturity – we don’t encourage a lot of people to do it, but the right person at the right time, and I think Tanner just like Andrew had the right mindset for it. And he’s done exceptionally well academically as well as athletically. He’s very mature for a young man and understands what his goals are and his aspirations are. I think he’s done a real good job.”

The national runners-up in 2015, the Tigers are dealing with typical college turnover, with a handful of players now on MLS rosters. Along with Tarbell (San Jose Earthquakes), Clemson is looking to replace starters Paul Clowes (D.C. United), Kyle Fisher (Montreal Impact) and T.J. Casner (RGVFC).

Health issues have cropped up, and kept players like Iman Mafi, Diego Campos and Saul Chinchilla limited during the exhibition season. In light of those injuries, Noonan has been experimenting with new formations, and shuffling players around the pitch. Mafi, who emerged as a force at left back in 2015, first had a run out in that spot last spring.

Entering 2016 after such a great year, Noonan has made it clear that this is a group and a new group after the turnover.

“How they evolve together and come together will be the key to any success they have in the fall,” he said. “The signs have been very good, but we’ve been pretty cognizant of making sure that they understand that we feel that this a new team, it’s not a carryover from last year’s team.”