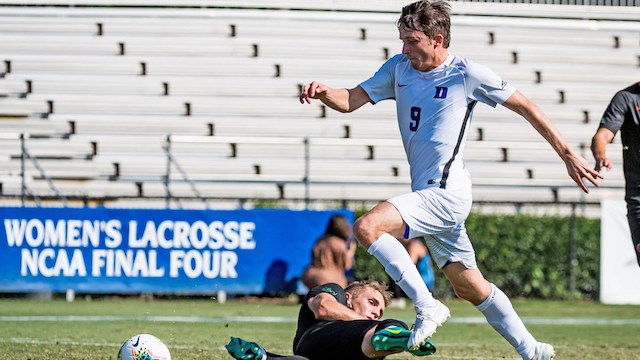 The Atlantic Coast Conference (ACC) is set to kick off later this month with the first meaningful games of the men’s soccer season. The conference is going to look quite a bit different this fall. For one thing, Boston College is not playing. There has also been a reshuffling of the divisions with the Atlantic and Coastal falling in the favor of North and South for 2020.

Virginia looks like the favorite in the North Region, while Wake Forest and Clemson are the favorites in the South Region. Check out a rundown of each program below.

Virginia was as close to a National Championship last year as any team could get, but ultimately came up slightly short to Georgetown. The Cavaliers lost a large portion of last year’s team, but did return a couple of key pieces. Forward Nathaniel Crofts earned a spot on the ACC Preseason Watch List. Goalkeeper Colin Shutler is returning and the leader of the defense. Virginia also brought in some transfers to help fill in some spots in the roster. A large freshman class should also contribute to the depth of the squad for 2020.

Head coach Jay Vidovich has been terrific in leading the the Panthers program in the most difficult conference in college soccer. Senior forward Edward Kizza is the top returner. He scored 27 goals in his last 38 games. Arie Ammann earned the starting spot in goal last season and will look to lead the defense in 2020. Pittsburgh opens the season at home against Louisville on Sept. 19.

After scoring 11 goals in 2019, midfielder Kristofer Strickler earned a spot on the ACC Preseason Watch List. Strickler has been the key player for the Hokies the last two seasons. He will be a marked man this fall but he should still put in work against ACC defenses. Mathijs Swaneveld is back in goal for the Hokies. He played nearly every minute last season for the squad. Virginia Tech opens up the season in October against Virginia.

Syracuse had a bit of wild up-and-down season in 2019. The Cuse finished 6-1-4 at home, but only managed to pick up a pair of victories on the road during the campaign. The fall of 2020 will present a condensed campaign, but a chance for the excellent coaching staff at Syracuse to focus on one game at a time. Senior defender Sondre Norheim was named to the ACC Preseason Watch List. Replacing the production of Ryan Raposo will be the big challenge for the Cuse. They open the season on Sept. 25 against Navy.

Louisville made some news off the field during this offseason. The Cardinals dismissed three players from the program after hosting a party. Even with the drama off the field, Louisville is still proceeding with the season. The Cardinals open up the season at home against Wake Forest after a pair of exhibitions. Junior forward Pedro Fonseca was named to the ACC Preseason Watch List.

Jack Lynn was a one-man show for the Irish last season. He finished the campaign with 10 goals an an assist. Notre Dame was picked to finish last in the North Region in the ACC Preseason Poll (via coaches vote). With Lynn and a few other key contributors back, the Irish should be more competitive and contend for a top three spot in the region.

Clemson was selected as the preseason favorite in the coaches poll. The Tigers will be counting on senior forward Kimarni Smith to lead the attack this season. Smith scored 13 goals last season. Midfielder Philip Mayaka could be the key for the Tigers this season. Clemson opens the season against Wake Forest.

The Wake Forest squad advanced to College Cup last season, and this year’s group looks like it could be even better. Forward Kyle Holcomb is back for his junior campaign. Midfielder Aristotle Zarris is another one to watch. Defender Michael DeShields was named to the ACC Preseason Watch List. Freshman Jahlane Forbes could be a key piece for Wake this fall.

North Carolina brought in a strong recruiting class that could be the difference for the program this fall. There are a number of players who could emerge as top players in the conference. Keep an eye on Akeim Clarke and Ernest Bawa. Junior goalkeeper Alec Smir was named to the ACC Preseason Watch List.

NC State had a strong start to last year’s campaign, but it fell off at the end with four losses in their last five games and only two wins from their last nine games. Transfer Alex Hernandez could be in line for big minutes in his debut season with the Pack. Senior midfielder George Asomani is the leader for the squad on the field, and was named to the ACC Preseason Watch List.

Duke brought in a strong freshman class that includes Amir Daley who scored in the scrimmage last week. Peter Stroud and Antino Lopez are other freshmen to watch as well. Senior goalkeeper Will Pulisic is probably going to get a lot of work this season, but he has been up for the task in the past.