There’s no question that the ACC is one of, if not the, premier conference of women’s college soccer.

Last fall’s College Cup entrants reflected that, as Duke, Wake Forest and Florida State made up three of the four NCAA tournament semifinalists.

But none of the trio managed to win the national title, as Stanford edged out Duke in a well-fought final.

Looking behind the tournament results, the simple fact that all but one team in the conference posted an overall winning record in 2011, and eight teams made the NCAA Tournament field.

The beginning of this season will be particularly interesting, as eight of the ACC’s best are set to miss the start of the season because of the U20 Women’s World Cup – not to mention that Virginia coach Steve Swanson will be in charge in Japan.

It’s going to be another hectic, difficult to predict season in the ACC, as any of a number of teams are capable of pulling off a conference win.

When gauging preseason favorites both at ACC and national level, it’s all but impossible to look past the College Cup finalist who returns all 11 of their starters like the Blue Devils do. 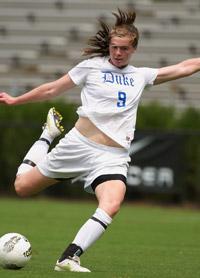 That includes the two-headed offensive spark of forward Kelly Kobb and midfielder Kaitlyn Kerr, who scored 11 goals apiece in 2011. And while Kobb and defender Mollie Pathman are among those on national team duty in Japan, that shouldn’t undermine the entire season.

So how does Duke outdo itself in 2012? Only a national title is improvement over last season’s title game loss, and that’s going to be firmly in Blue Devil minds throughout the upcoming campaign.

With Swanson on U20 World Cup coaching duties, assistant coaches will lead the Cavaliers through the first few weeks of the season. Joining Swanson in Japan is Morgan Brian, the top first-year player in the nation in the women’s game last fall.

Their absence could set the whole team off kilter for the year, but plans are in place not to let things get too disturbed.

After all, it’s not like there will be a void of good players left to compete in Charlottesville – Makenzy Doniak joins the program and is one of the best recruits in the nation, and she’ll be a nice compliment to Brian as well as standouts like Danielle Colaprico, Olivia Brannon and Caroline Miller.

Still, the biggest challenge is a team finding success without their coach at the start of the year – get through that stretch and good things are sure to follow.

Last year was all about near misses for the loaded Demon Deacons.

“We had a couple close calls, were five minutes away from the ACC championship, lost on penalties,” head coach Tony da Luz told TopDrawerSoccer.com earlier in the year. “In the College Cup, we don’t feel like we performed well enough, so the kids are still pretty hungry.”

Those disappointments in both the ACC tournament and College Cup are sure to haunt the program, and with almost the entire roster returning, it’s going to be the fuel for Wake all season.

Similar to other schools, one of their best players in junior forward Katie Stengel will be with the U20s, but plenty of players will remain on campus from day one, including goalkeeper Aubrey Bledsoe, Caralee Keppler, Kim Marshall and Riley Ridgik.

By their own ridiculously high standards, North Carolina is due to win this fall’s national championship. The team has never failed to go more than two seasons without winning the College Cup since the program began in the early 80s, and that mark will be put to the test in 2012.

There’s plenty of talent for legendary head coach Anson Dorrance to find minutes for on the field, including midfielder Amber Brooks and forward Kealia Ohai – although Ohai, along with Tar Heel teammates Bryane Heaberlin and Crystal Dunn, are heading to the U20 World Cup.

That’s just naming a few of the players, but they’ll have that target on their back once again simply because of who they are and what the program has achieved in the past.

The incoming freshmen class is also minus Lindsey Horan, who elected to sign a pro contract with Paris St. Germain earlier in the summer – although U17 WNT star Summer Green graduated early and will begin her college career this fall in Chapel Hill.

While contending for an ACC title has proven to be elusive for the Eagles, they’ve enjoyed consistent success regardless, eying up a tenth straight NCAA tournament bid in 2012.

And like so many other programs, there is plenty of talent on the roster, including midfielder Kristen Mewis, defender Casey Morrison and forwards Vicki DiMartino and Gibby Wagner. Generally a solid and steady team, the key this year is getting a big upset or two over the teams expected to finish above them in the standings – that’s what consigned them to a middle-of-the-pack finish in 2011.

Keep an eye on freshman forward McKenzie Meehan as well, a prolific ECNL scorer set to begin her college career this fall.

Ines Jaurena and Tiffany McCarty will both be seniors on the hunt to finish their college career on top, with support coming from Dagny Brynjarsdottir and Jamia Fields as the Seminoles look like they could be very dangerous.

Then of course, there is defender Kassey Kallman, a leader at the back who will miss the first few weeks of the season because of her involvement with the U20 WNT.

After the College Cup appearance of last year, the pressure is on to sustain and exceed success of a year ago.

A new era begins this season for the Terrapins, as long time assistant coach Jonathan Morgan assumed the reins as head coach earlier in the year.

And while he’s been through a spring season already, there’s nothing like coaching through a preseason – but the experienced players on the roster have made Morgan’s first fall in charge a pretty smooth one.

“We’ve got seven seniors here in this program, and those kids know what the expectations and standards are in our program,” he told TopDrawerSoccer.com. “They’ve done a great job in making my transition super easy.”

Morgan made it a point to emphasize that he’s hopeful for a collective effort leading the team to success this season, as Maryland seeks continued improvement after steady progress over the past few years.

And they have the players to keep the program moving forward, including senior captain Danielle Hubka and Hayley Brock, likely to be key figures up front, and freshman Ashley Spivey, who could be a contender for Freshman of the Year come the end of the season.

This year’s Hokies have plenty of talent back in the fold, and could put together a strong run in the ACC, with All Conference midfielder Kelly Conheeney now a senior and forward Jazmine Reeves entering her third year.

The real coup to continue the program’s progress might be in the recruiting class, with midfielder Ashley Meier, the NSCAA High School National Player of the Year, joining the team this fall. Her impact will be critical to the upcoming season.

An already strong Miami team landed a coup with the transfer of Tina Romagnuolo, a senior midfielder previously of Syracuse(w). She’ll help bolster a midfield that already boasts Fatima Nasser, and an attack led by senior forward Kate Howarth (11 goals, 7 assists in 2011)

Like other mid-table ACC teams, the Hurricanes cleaned up in non-conference play, winning eight out of their first nine games of the year. But they hit a rocky road once conference play began, and that will be key to their success in 2012.

Look no further than the Wolfpack to get a good indication how deep this conference is. With a non-conference record of 9-1, NC State lost five games in the ACC by a margin of one goal, and finished with an overall winning record despite finishing second to last in the conference.

Turning those losses into ties or wins is crucial if they want to reach the NCAA tournament, but it’s going to be an uphill battle after the departure of the team’s top three leadings scorers from 2011. Stephanie Bronson transferred to UNC Wilmington(w) while Tanya Cain and Alex Berger both graduated.

One of the most experienced players left is captain Meagan Proper, who will have to pick up a lot of the goal scoring slack along with her leadership role. Defender Shelli Spamer is going to be critical to the back line as well.

Since this is such a young team, if the recruiting class can leave their mark, it could lead to an NCAA berth for NC State.

Things can only improve for second-year head coach Eddie Radwanski after a winless experience in the ACC the year before.

The season had started so well for the Tigers as well, winning their first five games. But once the conference schedule came around, things went downhill, and Clemson lost 12 straight games, before winning the last game of the season.

Much of the roster is back from that team looking to improve things, including leading scorer Maddy Elder, along with defender Heather Marik, midfielder Vanessa Laxgang and forward Liska Dobberstein.

And while the top of the ACC is most likely out of reach, simply winning a few more games in conference will be a big step forward for this program.