As Caleb Porter approaches his final postseason in charge of perennial power Akron, he’ll have one asset that was a bit lacking in 2011: senior leadership.

“It’s nice to have seniors this year. Last year we didn’t really have any four-year seniors because we’ve been losing so many players early,” Porter told TopDrawerSoccer.com. “With Scott, Chad and Meves and Tommy, you have guys that have really stayed the course here in college and at Akron. 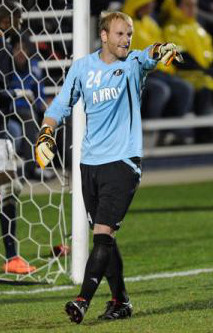 “I think that shows their commitment to the program, their loyalty, shows how much they have enjoyed their time here. It’s fitting that they’re graduating in my last year as well, because I feel like they embody a lot of the qualities that I really want Akron soccer to be known for.”

The success and subsequent talent drain after the 2010 season had left a void in 2011. But this year, each of the aforementioned seniors has figured prominently in what has been an extremely successful 2012 to this point. Heading into this weekend’s Mid-American Conference tournament – which Akron hosts as the conference’s regular season champions – the team holds an impressive record of 15-1-2, the only loss coming against Notre Dame back in September, when they had a player sent off in the first half when they were leading 1-0.

“In general the season has played out pretty well,” Meves said. “We started out pretty solid, had a lot of returning guys and I think we’ve really built up from last year. As the season’s progressed we’ve really stepped it up a notch, guys are playing well and everyone seems to be in good form. We’ve really been able to get to know each other on the field; players have developed a very good chemistry.”

Porter has seen his team evolve this season in the face of success. There still is the same emphasis on retaining possession, keeping the ball on the ground, and the Portland-bound coach thinks this is one of his best teams ever at bossing a game. But in year’s past, a dominant striker has provided a focal point in the final third, with the likes of Steve Zakuani, Teal Bunbury, Darlington Nagbe and most recently Darren Mattocks last season filling that role. However, this year, instead of deploying and relying on that one explosive player up front, the Zips can hurt you from a number of spots on the field, Porter labeling it a “five or six-headed monster.”

Junior Reinaldo Brenes is one of those heads, his 10 goals the best on the team, while Caldwell has chipped in 9. Midfielder Eric Stevenson has added a handful, and freshmen Dillon Serna and Alfred Koroma provide dynamic offensive threats from either the bench or in starting roles.

That lack of an individual goal scoring threat is not only offset by the more collective approach, but also by arguably the nation’s best defense (ranked second nationally for goals against). They’ve kept a zero in 14 of their 18 games to this point, and only North Carolina has conceded fewer goals (4 to Akron’s 6).

The Zips have also shown they can win close games, boasting five 1-0 victories, including the regular season finale on November 3 against Western Michigan. On what also happened to be senior night the four seniors were particularly influential, with Caldwell popping up and scoring the game’s only goal.

“That’s what we’ve been doing all year long,” Porter said. “Scott’s found goals or created goals somewhere, through his play-making ability and his passing. A lot of our play goes through him, our buildup. Chad and Meves have been getting it done defensively, and Tommy’s the guy off the bench who really brings a spark.”

Now, with the regular season in the books, the focus turns on winning a pair of tournaments, just like in 2010. For the senior quartet, who were all involved in the championship run two years ago – Caldwell scored the winner in the championship game – the sting of last season’s disappointment serves as enough incentive, forget the fact that they’re looking to go out on top, like Anthony Ampaipitakwong and Chris Korb did two years ago.

“We don’t really need a ton of added motivation,” Caldwell said. “We didn’t have a great year last year, so we’re always motivated to win the national championship, that’s always our goal. And seeing two years ago when we won the national championship, seeing the seniors go out on top and how great of a feeling it was for them, it’s definitely something that we would love – that’s our main goal and objective.”

However the last few weeks of the season unfolds, there’s little questioning the legacy this quartet will leave. Each has captured four regular season MAC titles, two MAC tournament titles (perhaps three by the end of the weekend) and a national title. Meves recently set the NCAA record for most shutouts with 52, eclipsing the record set by Josh Ford two years ago at Connecticut.

Along with that, the seniors have recorded an overall record of 75-7-9 (25-0-0 in the MAC) since 2009, and were part of teams that set an NCAA record for the longest home unbeaten streak in NCAA history (48 matches) and matched an NCAA milestone with 11 straight shutouts from 2009-10. They’ve only lost one game at home, posting a record of 40-1-6 in three-plus seasons heading into the postseason.

Adding to the past haul in one final postseason run is now the main focus, in a group that Porter thinks is destined for big things beyond just this fall. Even if they don’t manage to pick up any more hardware, Porter perceives this group to be one for the record books.

“These four have done a lot for this program,” he said. “I haven’t looked at the stats, but the amount of games they’ve won, the conference championships, College Cups, shutouts, NCAA records that they’ve contributed to, have to go down as one of the best four-year classes in the history of college soccer.”