Alabama's Fast Start Is Years in The Making 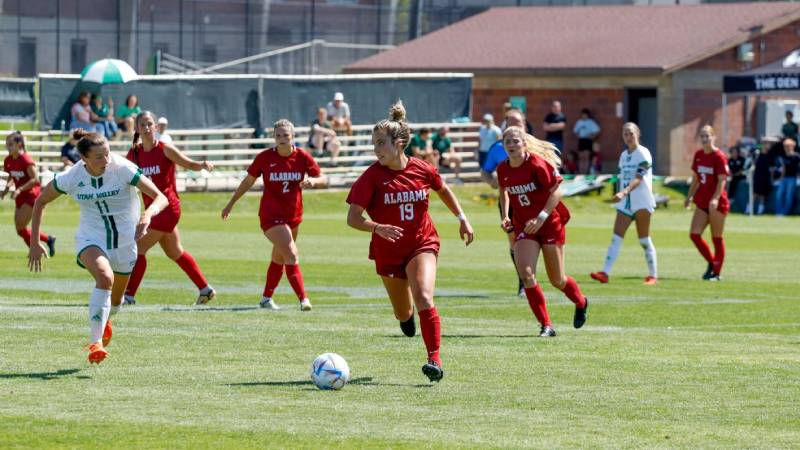 After Alabama fell to BYU in the second round of the 2021 NCAA Tournament, head coach Wes Hart knew his team deserved to lose.

The Crimson Tide were on the wrong end of a 4-1 scoreline, comfortably beaten by a team that would eventually advance to the College Cup. But in that defeat, Hart saw a glimmer of something, suggestions that his side might be more competitive going forward.

“Even though it's four to one, we presented some challenges for them and had some good looks,” Hart said.

Ten months on from that loss, Hart’s analysis is starting to come together. His Alabama team has won eight of its first 10 games, beating four ranked teams on the way. And although the season is still in its early knockings — championships, of course, are not clinched in September — there are signs that the Crimson Tide might just be in for a deeper run.

“I think we're incredibly talented. And I don't think there are too many teams that we couldn't compete with and beat on any given day,” Hart said,

Alabama entered the season unranked and, for most outsiders, written off. It had gone 11-10-1 in 2021, scraping an at-large bid to the NCAA Tournament. And although it snatched a 1-0 win over Clemson in the first round, the Tide looked to have reached their ceiling as a second-round team. But this year, a solid spring season gave way to a promising August, and this Alabama team, at the very least, is incredibly difficult to beat.

This is all of little surprise to Hart. Now in his seventh season at the helm in Tuscaloosa, the former Florida State assistant has pieced the program together, building on small successes. For him, this isn’t a fluke start. Rather, it’s the fruition of something that began a long time ago, the payoff for a squad that has aged together, adapted together, and might yet win together.

“We’ve not changed anything,” Hart said. “This is what we've been trying to do for years now. It's just all kind of coming together.”

“It was not as if we're an overnight success”

Alabama’s quick start can be traced back to 2018. Riley Mattingly Parker and Kat Rogers — then relatively unheralded recruits — walked onto campus as freshmen. They were joined by two others, the four freshmen combining for 23 starts in an unremarkable year. The Tide spluttered in SEC play and settled for an 8-8-3 record. And by the end of 2020, only two of those recruits — Mattingly Parker and Rogers — remained.

The following year, though, things changed. Hart raked in a more promising group, bringing 10 new faces to Tuscaloosa. There was versatile defender Reyna Reyes from a top Texas club. Sasha Pickard and Bella Scaturro were drawn from Colorado and California. Those three, plus a flurry of other new faces, landed Hart his first top 15 class as an Alabama coach. That group contributed consistently, while the duo of Mattingly Parker and Rogers continued to grow.

And their improvement was reflected on the pitch. Alabama went 10-7-3, amassing a .500 SEC record and upsetting Auburn in the first round of the conference tournament.

“That was a very good recruiting class. Back in 2019, we had about six or seven of those starting regularly,” Hart said.

Season-by-season, the group progressed. And while one or two transferred out, most of the core stayed together. Meanwhile, Hart scoured the transfer portal for further options, using existing connections to hunt down fresh talent to bolster the squad. A few players that he’d coveted out of high school while at Floride State, including now star player Riley Tanner, became available. When her name popped up, he jumped.

“When she hit the portal, I don't think I'd spoken to her, had much thought of her for about three years,” Hart said. “I saw the name hit the board, and I'm like, you know, what, I'm gonna reach out and give her a call.”

Tanner was interested and joined the squad ahead of the 2021 season. Her offensive production was relatively steady — three goals and three assists — but it was another layer to a team that was hitting its stride. The 2021 campaign ended in heartbreak, but things quickly turned around last spring. The Tide brought back some of its best players, and Mattingly Parker — who missed the whole fall season with injury — worked her way into the fold in spring 2022.

“We had some good freshmen coming in, and we knew this could be our year,” Reyes said.

Her premonition was backed up by a solid spring campaign. Hart scheduled three SEC teams in an attempt to weigh up the competition for the fall. The Crimson Tide snatched a draw against Vanderbilt, before depositing both Mississippi State and in-state foes Auburn. After those victories, the rest of the league took notice.

“I talked to a few coaches of teams we played against in the spring, and they're like, ‘Oh my goodness, y'all are gonna be a handful in the fall’,” Hart recalled.

“It was not a surprise to us”

Miami(w) midfielder Megan Morgan received the ball about 25 yards from goal. In the second after, the Alabama defense seemed to do everything right. Macy Clem cut off a passing lane. Sydney Japic closed down the attacker. But Morgan released a speculative shot, one that bounced over the outstretched arm of Alabama goalkeeper McKinley Crone and into the net. Marianna Annest turned away in frustration, Crone watched the ball for a couple of seconds, frozen on the ground.

Alabama pushed for an equalizer. It tallied 22 shots to Miami’s three, earned seven corner kick’s to Miami’s one. Reyes had a good look saved late in the second half, and a couple of other chances also went awry. The 1-0 loss back on Aug. 21, then, was a frustrating one.

But it wasn’t a crushing one. Four days later, Hart’s side was back on the pitch and comfortably beat Southern Mississippi at home.

“It was like: ‘that's not happening again, that was not the standard that we know we can hold’,” Crone said.

What followed was a sparkling run. Three ranked opponents were dispatched, including Clemson and South Carolina. Over the next eight games, the Crimson Tide only conceded four goals while scoring 24. They are tied atop the SEC and have only one loss to their name.

The stats are good, too. Mattingly Parker is second in the SEC with seven goals. Felicia Knox has a conference-best eight assists. Crone is saving shots at an 84 percent clip and the team as a whole only allows seven shots per game.

There’s competition at every position and the squad can tweak styles based on the opponent. Gianna Paul can be a game changer with her pace up front, Rogers’ passing has unlocked some tight defenses.

“We have a dominant person for each position, a senior or something, which is good, but we have good depth on the team to fill those positions as well,” Reyes said.

There is, of course, reason for caution. The Crimson Tide may have started fast, but the season is only four weeks old. Tonight, they play Tennessee, their presumptive biggest rival in grabbing the SEC crown. There are further obstacles, too, with Arkansas and Ole Miss(w) still on the schedule — as well as an inevitably tricky derby at Auburn.

The Crimson Tide got a second shot at BYU on September 6 — a rematch of their NCAA Tournament loss from the previous season. And Alabama delivered. After conceding early, it rattled off three straight goals before surviving late pressure to cling on to a 3-2 win in Utah. That resultwasn’t a revenge game, Hart stressed, but perhaps a testament to how far the team has come. What remains to be seen, then, is how far it might go.

“This team has the talent to do whatever we set our minds out to do,” Crone said.