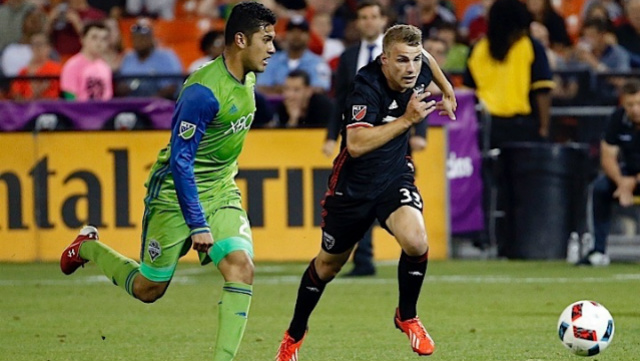 WASHINGTON — Prior to this week’s road trip to New England and D.C., the only appearances Tony Alfaro made in a Seattle Sounders kit came from the bench.

The rookie out of Cal State Dominguez Hills had been in the 18 for 10 MLS matches prior to being called into action last Saturday against New England, subbing in for an injured Brad Evans.

After a decent 50-minute shift against the Revolution, Wednesday night’s 2-0 win over D.C. had a feeling of déjà vu for Alfaro. This time, an injury to Zach Scott pressed the 22-year-old center back into action. Fifty minutes later, Seattle secured a shutout and snapped a three-game losing streak in the nation’s capital.

“You’ve got to take your hat off to him, he’s had to come in twice, once for Evans now and one for Zach [Scott], for a rookie playing his first two games, he plays with some pretty good composure,” Sounders head coach Sigi Schmid said after the win against D.C.

The two appearances technically weren’t Alfaro’s first pro appearances of the year. He’s played regularly for S2 in the USL, making 10 starts and logging 900 minutes for the third division strugglers.

The left-footed defender tries to maintain the same mental approach no matter where he begins a game.

“I always try to be prepared whether I know I’m going to play or not,” Alfaro said. “I always have that mentality as if I were going to play in the game.”

Stepping on the field five minutes before the half against D.C., Alfaro slotted into the back line next to Brad Evans rather seamlessly. A lanky, 6-foot-2 defender that possesses a calmness and composure on the ball that’s rare in a rookie, Seattle’s defense didn’t skip a beat with Alfaro on the field.

His unknown body of work is still an asset at this point of the season.

“Tony’s a good player,” Sounders midfielder Cristian Roldan said. “I don’t think people realize how good he is. People underestimate him and it’s good that he comes in and no one knows about him, they may not know that he’s [left-footed], and he’s a good passer, they give him a little bit of space and he takes advantage of it.”

The numbers against United were decent enough, as Alfaro completed 16 of 21 passes, made three tackles and a clearance just outside the six-yard box. Prior to the 2016 draft, Alfaro was one of the lesser known pro prospects in the college game. That wasn’t anything to do with his lack of ability, as he earned NSCAA First Team All-American honors as a senior in 2015, and made at least 16 appearances all four years at Cal State Dominguez Hills. It was more a reflection of the seemingly insurmountable odds and unpredictability of the draft facing Division II hopefuls looking to make the jump to Major League Soccer.

However, a quick look at Alfaro’s skillset and it was clear that someone would take a chance on the native of Southern California. Seattle eventually grabbed him with the 27th overall pick in the draft, keeping him mostly with S2 as he adjusts to the professional level.

“It’s been a great experience,” Alfaro said about the first few months as a pro. “I’m happy to be getting some minutes now, and learning when I’m not playing.”

Specifically, Alfaro said he’s learned about taking care of his body off the field, whether that’s eating habits or putting in extra work when necessary.

“You always have to be ready to perform 100 percent,” he said. “Sometimes when we have an easier day, a more mellow day, it’s kind of our job to go for another light jog or do something else.”

After living mostly in Southern California for his entire life, Alfaro’s enjoyed the transition to a new city, which he’s explored during what little down time he’s had.

His veteran teammates along the back line have been an asset to his growth on the Sounders.

“They definitely help me out,” Alfaro said. “When I was playing with Zach, he does a great job giving me directions and advice, before the game and after the game. Brad is a great leader, and his vocal leadership I look up to that. For me as a young guy, it definitely helps to have someone like that to be there and help you out.”

But regardless of who he partners with at the back, it doesn’t change what Alfaro can control the most: his own play. That will remain a constant as he battles for more minutes as the season progresses.

“I just focus on myself, play my game and I know that everyone’s going to do their job, so we count on that,” he said.