Because of Boston University’s looming switch to the Patriot League, the Terriers are ineligible to play in the conference tournament, adding a unique twist to the upcoming America East season.

Stony Brook, who came up short in the regular season but made it count in last fall’s postseason, enters as the favorite to clinch another spot in the NCAA tournament, although it’s going to be a tight race with UMBC, Vermont and Hartford aiming to be there at the end.

After shaking off a poor start to the season out of conference last year, the Terriers regrouped to capture the regular season title, bowing out in the conference tournament.

This year, the stakes are different, as the move to the Patriot League removes Boston University from consideration for the postseason conference tournament.

That means there is no margin for error if they want to make the NCAA tournament, as it will be down to an at-large bid and RPI. They’ll need a big year from Kelvin Madzongwe, Dominigue Badji and Derrick McCaffery to instill hope in those chances. 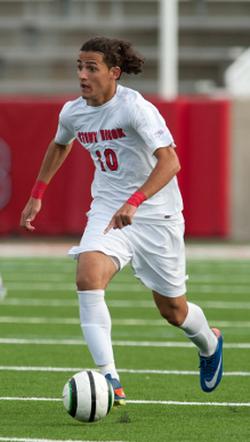 One team really looking to take advantage of the soon-to-be departed Boston University is Stony Brook.

Regardless of the competition, head coach Ryan Anatol is continuing to build something significant at Stony Brook. A year after capturing the America East tournament title, a significant chunk of last year’s team returns for more, including forward Beiran Gobeil and midfielder Leonardo Fernandes, both key component of the Seawolves attack.

With a tough schedule out of conference, including a matchup against 2011 College Cup runners up Charlotte, the Seawolves will have every chance to prove themselves this year.

There’s a new home for Vermont this season as the soccer program moves into a new turf stadium.

As a result, head coach Jesse Cormier realizes the need for a tactical adjustment ahead of this upcoming season in order to embrace the new confines.

“We have to focus on being a bit more technical and work on linking up a little bit more as a group,” he told TopDrawerSoccer.com. “So the tactics of the passing game will be something we’ll focus on.”

While a couple of key players from last year graduated, Cormier is still excited about the base of talent that remains.

Among those are D.J. Edler, Joe Losier, Zach Paul and Sean Sweeney, all who contributed significantly to last year’s third-place finish in the conference. Cormier is looking forward to another season and trying to snag the conference bid.

“I think overall we’re excited, we feel like we’ve got a good balance of some experience but also some good young incoming guys,” he said.

While that is a blow to the Retrievers’ aspirations for improvement, there’s a lot of talent left, including defender Liam Paddock, who compliments attacker Pete Caringi III.

In addition to that, goalkeeper Phil Saunders, who started all 20 games as a freshman in 2009, looks to reclaim his position as a red-shirt junior this coming season, while the Retrievers expect big things from the incoming transfer of midfielder Mamadou Kansaye (Previously of NC State).

Swedish transfer David Bernhardsson had a big year last season, scoring six goals and adding six assists in just 13 games. If he can maintain that form over a full season, Hartford will only continue to climb the standings.

Only six seniors are gone from last year’s team as well, meaning talent like Antrobra AMpadu and Connor Yeaney are back for more, although All-Conference Second Team midfielder Patrick Boucher is gone.

Defensively, things need to be tighter at the back for Albany as they look to climb the ladder.

Conceding 31 goals wasn’t good enough to grab more than just a single win in the America East. With scoring punch like Quintel Gates and Pomare Te Anau returning, the goals will come – it’s just a question if they can keep them out of their own net.

A lack of goal scoring punch – averaging just a goal per game – was one of the reasons the Wildcats finished second from bottom in the conference.

There’s a reason for optimism, with talent back in the fold like Ryan McNamara, Steven Palumbo, David Schlatter and sophomore goalkeeper Travis Worra all aiming to improve things after enjoying decent campaigns last year.

It’s been a few years since Binghamton claimed an America East title, and the team looks to be far off again this year after a last-place finish in 2011.

The good news is that leading scorer Jake Keegan (7 goals, 5 assists) is back and will certainly be hungry for more goals and many more wins. Sophomore Tucker Sandercock also had a good year at the back, along with Trey Jasenski.