For the last six years, Boston University has run the show in the America East.

The five-time America East Champions will only get one last chance to run things this year, as they’ll move to the Patriot League next season.

And there is a twist – because of their move to the Patriot League for the 2013-14 season, Boston athletics aren’t allowed to compete in the conference tournament, meaning the automatic NCAA bid is going elsewhere this fall.

Who that will be is a good question, as Hartford, Albany, Vermont and New Hampshire will look to jump into the mix this upcoming fall. 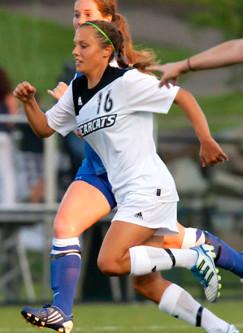 It was another dominant year for Boston both in and out of the conference.

But after losing nine seniors to graduation, this upcoming year is going to look a lot different. And with the postseason tournament no longer an option in order to get into the NCAA tournament, it’s regular season or bust for the program.

“We’ve been raising the bar every year for the last ten years, but it got raised a little bit higher [last year],” she told TopDrawerSoccer.com. “That’s exciting – can this year’s team take the next step?”

A real key for Boston is establishing new starting central defenders, and it’s something that will be sorted in preseason. Feldman is hopeful that Jess Morrow and Kai Miller, who did well in the spring, can provide stability along the back line.

Pressure will be just a bit higher, of course, as the team will have to get its RPI and ranking in order, as they won’t have a shot an NCAA tournament automatic bid offered by the postseason tournament.

While slightly overshadowed by BU’s dominance, Hartford had a fantastic season in 2011, finishing second in the conference.

Head coach John Natale knows it’s going to be a tricky test to repeat that.

“With a challenging schedule for us this year, we are going to have to stay focused and mentally be strong enough to deal with opponents coming at us especially early in the year,” he wrote TopDrawerSoccer.com in an email.

However, the majority of the team returns from that successful run, including NSCAA All-American goalkeeper Erin Quilin, Portugal international Amelia Perriera and midfielder Caroline Dixon.

Natale is also excited about the incoming class, with nearby players like Sidney Spremullo and Kristin McAdams entering the fold and looking to contribute right away.

But the onus is going to be on this team to peak at the right time.

“The most important thing for us is that we are prepared and our playing our best in the conference games,” Natale said.

There’s an experienced group in Albany looking to take advantage of the lack of BU in the postseason tournament.

Seven seniors dot the roster for the fall, meaning there won’t be a shortage of experience. However, improvement is needed on both ends of the field in order for Mary-Frances Moore’s side to break through.

This year, Albany is hoping to jump out to a quick start, as opposed to 2011 when they won just two of their first 11 games. Maggie and Chelsea DeVerna, along with Aubrey VanGorder will look to play big roles as seniors, while Jackie Ubert and Dani Britt will compete for playing time in goal.

If one things for sure, if they can manage to pick up where they left off – winning seven of their last nine games, it’s going to be a much better year for the Great Danes.

Another America East team with a number of returning players – 25 in total – the Bearcats are aiming to continue to move forward and make it past the conference tournament semifinals.

To do that, they need to score more goals. Last year, the team only conceded 15, with returning goalkeeper Carrie Martin leading the stout defense. But scoring just 17 limited their success in the win column.

With that said, if the attack, led by senior forwards Sarah Furminger and Candice Rowland, can take find the back of the net more often, the Bearcats could quickly climb the standings.

One of the youngest coaches in Division 1, Vermont head coach Kristi Lefebvre is slowly starting to build something special in the Northeast.

And perhaps this is the year her program progresses into conference contention. The five wins in 2011 were the most the team had won since 2006, and the door is creeping open a bit more with the departure of Boston from the conference fold.

The top two leading scorers from 2011 have graduated, meaning there’s all the more for New Hampshire to do as they seek improvement this year.

Freshman attacker Meghan Ledwith is one of the candidates to help fill the shoes of the departed Brooke Duchaney and Stephanie Gilkenson. Junior goalkeeper Erica Correa should be back in net, as the team needs to tighten things up at both ends of the field in order to toss their name into conference contention.

There are a host of new faces joining Stony Brook this fall, so how they fare is going to be crucial to the upcoming season.

Three seniors will lead the team, in midfielder Sa’sha Kershaw, forward Taryn Schoenbeck and forward Colleen McKenna, who missed all of 2011 because of an injury.

Will it be the right blend of new faces and familiar ones? Only this season will truly tell.

Making an improvement in conference is critical for a good season for Maine, as the Black Bears managed just two victories in NEC play a year ago.

And they’ll need to find a way to improve without the goal-scoring ability and leadership of the graduated Carolyne Nellis.

That responsibility may fall on the shoulders of some of the newcomers such as Alex Abrahams or Charlene Achille – although there will be some returning experience, with Nikki Misener and Maddie Hill back.

Things can only get better for the Retrievers, after going winless in 2011, and Leslie Wray is the new coach in town to try and steer the program in a new direction.

Wray is actually jumping into coaching for the first time since 2006, when she resigned to end a seven-year stint at Towson. It’ll take a lot to turn the program around, but Wray’s journey begins against Lafayette in August.