Dayton finished strong and look like the team to beat in the ever-changing and crowded Atlantic 10.

There are a host of strong programs that are certain to challenge, including La Salle, Richmond as well as newcomers VCU. Here’s a look at how things shake out: 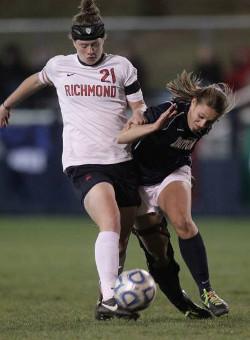 With the top two of Kelsey Haycook and Renee Washington, now a sophomore and junior respectively, back, this La Salle team is likely here to stay close to the top. The two scoring 27 goals this year, but the Explorers were equally as impressive at the back, only conceding 12 goals this year.

Replacing the defensive portion, as All Conference defender Jess Hopton and goalkeeper Melissa Sanger both graduated – so provided the team maintains their steel at the back, they should be very competitive once again.

The Spiders are coming off a strong performance in 2011 and are looking to assert themselves within the conference.

“Expectations are pretty high,” head coach Peter Albright told TopDrawerSoccer.com. “The new A10 is certainly a topic that were all interested in, picking up Butler and VCU.”

The tricky part of the season for Richmond is the absene of Becca Wann, who will be with the U.S. U20 WNT for the duration of the Women’s World Cup. The void she’ll leave was addressed in the early stages of the season.

“She’ll be gone for the first seven games, so I guess the focus on our preseason is trying to put some kind of attacking scheme together that in her absence try to figure out how to score some goals and keep it tight defensively,” Albright said.

Helping the team cope with Wann’s absence will be co-captain Kristin Lescallet, while leading the team from the back is other co-captain goalkeeper Andrea

Picked to win the conference, it’s easy see why – the Flyers return a good chunk of what was a very dangerous and attack minded team last year. Colleen Williams (16 goals, 15 assists), Juliana Libertin (10 goals, 10 assists) and Kelsey Smigel (13 goals, 5 assists) are all back for another shot at the conference title.

Head coach Mike Tucker and the rest of his side will surely have a target on their back through most of the season, but with the talent available, should be able to live up to the lofty expectations.

Things came together very well for UMass last year, as their deep run in the A10 tournament came to an end against a very good Dayton team. Replicating that success, with the graduation of All Conference talent like Deanna Colarossi, Meghan Collins and Julie Morrissey.

However, talent remains – goalkeeper Emily Cota provides senior leadership at the back, while midfielder Moa Mattsson picked up Second Team All Conference honors in her freshmen season last year and will need to continue to progress.

Tori Burchett’s graduation means the team loses its top scorer who accounted for nearly a third of the team’s goals. Molly Curry is a prime candidate to help account for that loss. Now along with replacing Burchett, the Bonnies must maintain their high level of defense, which conceded only 21 goals on the year. Senior defender Shannon Van Riper is one of the more experienced players in that group.

It’s a young team down in North Carolina, and the 49ers bid farewell to their top two scorers and need offensive changes to stay within striking distance.

Their incoming class of eleven freshmen, including forward Katie Thomas, Alex Meyers and Tori Fubara, all candidates for playing time alongside Jessica Ryan, who saw limited minutes as a sub last year. All Rookie midfielder Amanda Jones is also back.

It’s a pretty experienced group up in Fordham that finished right smack in the middle of the A10 pack a year ago. The driving force in 2011 was the offensive plaudits of Kristina Maksuti, who scored 9 goals in her freshman year.

With a better back line – the team did concede 36 times last year – it can spell good things ahead.

Forward Abbey Stock enjoyed a breakout freshman year, scoring 5 goals and adding 3 assists. She didn’t get a ton of help though, as the team scored just 16 goals in total.

That’s a number that has to shoot up, and junior forward Jenny Hummert can compliment Stock as she did a year ago.

Co-leading scorer in 2011 Jen Pfeiffer is gone, but Mo Hawkins is still only a junior after her big season. Coping with Pfeiffer’s departure, along with the graduation of Maggie Lupinski is critical to how the Hawks fare.

The biggest obstacle standing between Xavier and a good season could be a simple formula of winning away from home. Last fall, the team went 7-1-1 at home, while going 0-7-2 on the road.

Adding a few more wins away from home is obviously going to be critical to their chances, as will finding a replacement for the departed Jessica Brooks (3 goals, 3 assists).

First-year head coach Sarah Barnes has her hands full, trying to vault the Colonials up the standings in a crowded Atlantic 10 conference. Barnes will have last year’s leading scorer and senior Adriana Moya leading the way, while co-captain Kayley Sullivan will also provide a guiding hand as the programs aims to move forward.

A couple important seniors have graduated, with Alexi Veith and Stephanie Santos are gone. Jennifer Barrientos, Marisa Ammaturo and Dariann Sellitti are three players who need to have big seasons.

The rebuilding project continues for the Owls and head coach Matt Gwilliam, who can only hope the program can move forward in 2012.

Defensively, Temple conceded 46 goals, a whopping total, although showed signs of improvement by winning two games in the conference.

Al Alvine is heading into his first season in charge at Duquense(w), and he’ll look to start turning the program around after a last place finish in 2011. Alvine comes in after five seasons as head coach at California (PA).

First order of business will be breathing life into a stagnant attack that scored just 9 goals in 18 games, and conceded 33 goals.

Could these league newcomers also double as conference title challengers?

The program has made good progress in the last few seasons, and they enter a new league with lofty ambitions.

“Our goal going in is to win the conference,” head coach Tim Sahaydak told TopDrawerSoccer.com. “I think having played in the CAA, and the CAA is a strong conference…I think that translates well to the A10.”

Having those ambitions isn’t unrealistic either. While they won’t be the favorites, the Rams have plenty of capable players, including Costa Rican internationals Cristin Granados (midfielder) and Wendy Acosta (defender), along with forward Courtney Conrad.

The team is also looking forward to having much more at stake when they take on the nearby Richmond Spiders.

The other newcomers in the Atlantic 10, the Bulldogs have an experienced group returning, including sophomore Elise Kotsakis and senior Katie Griswold who were the top two on the team in goals scored last year.

Overall, it’ll be a tough test in making the jump and getting used to a new conference, but Butler has the players to make the transition smoothly.