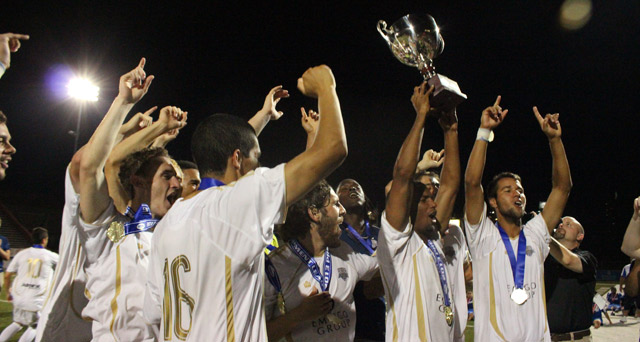 AUSTIN, Texas – The Austin Aztex claimed their first championship as they rallied from an early deficit to defeat the Thunder Bay Chill 3-1 in front of a crowd of 4,253 fans at House Park in the 2013 PDL Championship Game presented by Nike on Sunday night. Sito Seoane capped an outstanding postseason, and claimed Most Valuable Player honors, as he scored twice and added an assist to lead the Aztex’s victory, while Thunder Bay was forced to play most of the game with 10 men as goalkeeper Stephen Paterson was sent off early in the contest.

Seoane had five goals in four games in the PDL Playoffs, including the game-winning goal in each of the Aztex’s four victories on the way to the championship. He pulled the Aztex even from the penalty spot following Pedro Adan’s early goal had given the Chill the lead. Seoane then added a second midway through the first half before assisting on Khiry Shelton’s finish just before the break.

“It’s unbelievable,” Seoane said. “Thanks to my teammates, they were supporting me the whole season, and without them I couldn’t have done this. It’s unbelievable, to win a championship in front of all of your fans. There are no words.”

The game got off to a flying start, with Thunder Bay taking the lead in just the second minute. After a long throw-in from the left by Paul Dillon was half-cleared by the Aztex, the ball came to Zetroy Robertson 20 yards from goal. His long-range shot was redirected on frame in front, and parried away by Austin goalkeeper Devin Cook, only for Adan to be on hand to blast home the rebound.

Austin responded immediately, and momentum swung in their direction two minutes later as Tony Rocha slid a pass through the Thunder Bay defense that allowed Kris Tyrpak to break in on goal. Paterson came out to challenge, but brought down Tyrpak just inside the penalty area, which earned not only a penalty kick but also a red card for the goalkeeper. Daniel Alvarado came on to face Seoane’s penalty kick, but went the wrong way as Seoane’s shot went into the upper-left corner for his fourth goal of the playoffs.

“When they scored, we were like, ‘we’re here, we’re in the national championship, we’ve got to step it up, we’ve got to come back and get one back as fast as we can’,” Tyrpak said. “That run that I did, me and Tony have been working on that all year, we worked on it every day in practice, and we just made eye contact and he put it where I needed to be. Unfortunately for the goalie came out, he caught my foot and we tied it up.”

With a man advantage, the Aztex tried to drive home their advantage quickly as Shelton threatened twice on the left side. Austin was able to take the lead in the 22nd minute as Zack Pope overlapped and sent in a low, near-post cross from the left side that Tyrpak beat his man to. The ball deflected perfectly to Seoane eight yards out, who lashed home a finish into the roof of the net from just outside the left corner of the six-yard box.

Thunder Bay’s best chances to get back on level terms mostly came from set pieces, with Dillon’s long throw-ins a consistent threat. The Chill came close in the 45th minute as a header by Axel Sjoberg went straight at Cook, but saw the hill they had to climb get steeper in the first minute of stoppage time as Seoane played a pass to Shelton in the right channel, and the rangy forward rifled a low shot into the left corner for a 3-1 halftime lead.

The Chill came out aggressively to start the second half, and were offered an avenue back into the game in the 54th minute as Sullivan Silva was brought down in the penalty area by Aaron Guillen. Dillon stepped up to take the kick, but sent his shot wide of the left post as the Aztex held onto their two-goal lead. The Chill were able to continue to generate chances from set pieces, Nolan Intermoia’s header forcing a save from Cook in the 58th minute, but as the second half wore on, the chances became fewer as playing down a man took its toll.

Austin did have chances to add to its lead, the best coming to Tucker Hume as he was played into the left side of the penalty area in the 66th minute, only for Alvarado to come off his line quickly and make a fine save. Jesus Cortes also had a pair of opportunities, both of which missed the target, but they were academic as the Aztex sent their fans, led by Eberly’s Army, into massive celebrations as the final whistle went.