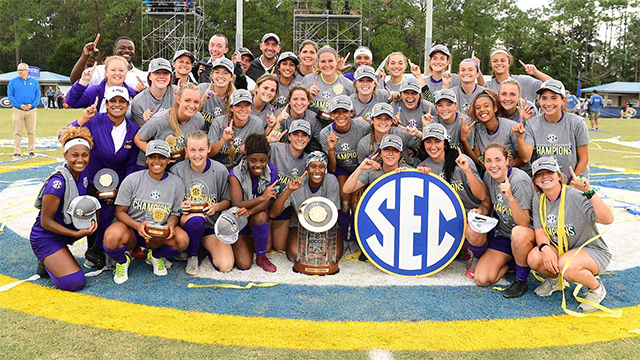 The 31 automatic bids for the 2018 women’s Division I NCAA tournament have been locked up, with conference tournaments wrapping up and regular seasons completed in the Ivy League, WCC and Pac-12.

Florida State captured the ACC conference tournament crown, besting North Carolina by a 3-2 score in a wild affair in Cary, N.C. The Tar Heels came back from a 2-0 deficit after Dallas Dorosy scored a pair of goals in the first half. Alex Kimball and Ru Mucherera scored within nine minutes of each other in the second half to tie the game. Florida State took the lead for the good thanks to Kristina Lynch’s 84th minute goal.

The Georgetown Hoyas completed their perfect season with a 1-0 win over Xavier in the Big East tournament final. Senior forward Caitlin Farrell scored her 17th goal of the season, and the excellent Georgetown defense took care of the rest in the nation’s capital.

A remarkable run in Orange Beach came to a successful conclusion on Sunday with LSU winning its first-ever SEC tournament. After going down to a Taylor Malham goal in the 13th minute, Shannon Cooke equalized in dramatic fashion from 35 yards out to tie it 1-1 in the 72nd minute. The Tigers captured the conference crown by a 4-1 margin in the penalty shootout.

In the Big Ten tournament, Minnesota always secured the conference bid in penalties. Neither side could break the deadlock through 110 minutes, with Maddie Nielsen making four saves for Minnesota and Amanda Dennis stopping eight shots in the Penn State goal. In the shootout, Nielsen made the crucial save off Frankie Tagliaferri’s effort to secure the win for the Golden Gophers.

Below is a complete rundown of automatic bid winners.