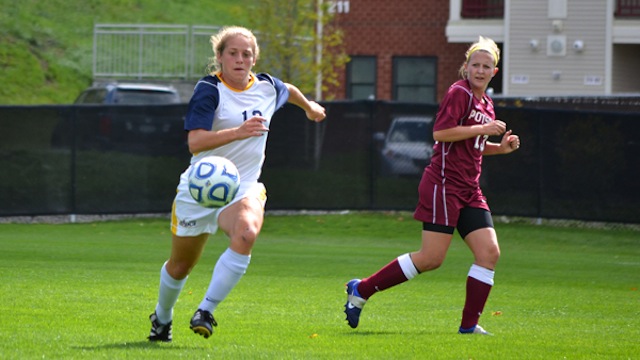 The Division II season opened in earnest over the weekend, providing games galore from California to Florida. As the West Florida women and the Lynn men opened successful national title defenses — neither lost a game, combining to go 4-0-1 over the course of the weekend — a fresh group of hopefuls renewed the quest for the ultimate DII honor.

Here are some of the best stories from both the men's and women's sides from DII's opening weekend.

No. 1 Lynn makes it look easy on opening weekend

All eyes were trained on the top-ranked Lynn men last weekend. Fresh off a national title they made look exceedingly easy in 2012, Lynn opened the season with a raft of new faces and the heavy burden of expectation. Lynn brushed off the start-of-season jitters without incident, cruising past Shorter 4-1 before beating Lee 2-0 on Saturday to win its second game in as many days. It was perhaps most impressive that Lynn came out so hot in its opener considering the Knights were breaking in nine new starters. Jake Furman lashed in a pair of goals in the opening game, and goals from Anthony Desperito and Yannick Braeuer gave the defending champs the best possible start to the season.

The "Clash on the Coast" lives up to lofty billing

There was no better place to watch Division II women's soccer last weekend than Savannah, Ga. Armstrong Atlantic State hosted the Clash on the Coast, an invitational that featured No. 1 West Florida, No. 2 Grand Valley State, No. 5 Armstrong Atlantic State(w) and No. 13 Columbus State. So fierce was the competition that none of those teams came out of the weekend completely unscathed.

Inevitably, the invitational produced some fantastic games, namely the opener between defending national champion West Florida and Columbus State. West Florida was pushed hard, needing a header from Chelsea Palmer in the 70th minute to level the score at 2-2 and force it into the extra period. The Argos left it late, but Icelandic freshman Freyja Vidarsdottir scored as time expired in the first overtime to give West Florida a nailbiting win and a 1-0-0 start. The Argos drew No. 5 Armstrong 1-1 in their second game on Sunday. Elsewhere, Armstrong and Grand Valley State fought to a scoreless draw while Grand Valley State followed up with a tidy 2-0 win over Columbus State on Sunday.

Of any team outside this year's top five, New York outfit LIU Post, which climbed up to No. 3 in this week’s NSCAA poll, had the best record in 2012 at 18-2-0. Despite earning a No. 1 seed in their regional, the Pioneers gave up a heartbreaking 89th-minute goal to Massachusetts-Lowell in the first round to put an early end to the season. While Lowell has since moved on to the Division I ranks, Post is attempting to rebuild its national title hopes from the ground up this season. So far, so good. Post blitzed Concordia (NY) 3-0 in its opener off goals from three different players. On Saturday, the Pioneers grabbed a another 3-0 lead, this time over Adelphi, but this time the opponent pushed back. Despite a pair of goals from Elvind Austboe to push his tally to three over the first two games, Adelphi scored twice in 15 minutes in the second half to make it a game. But Post held on over the final 25 to preserve a perfect 2-0-0 start.

It's not as though anyone overlooked Western Washington coming into the season. The Vikings steamed into the regional title game in the NCAA tourney last year and returned enough talent to garner a preseason No. 13 ranking. But the team that ended Western Washington's 2012 season? That would be UC San Diego, which made a run to the national title game. So when the Vikings got a 1-0 win over their rivals to the south in their season opener last weekend, it registered as a pretty legitimate upset and sweet vindication after last year's exit. Jessica Bertucci scored the winner with just over a minute to play for the first big top five women's upset of the 2013 season.

Last season, the Tampa women's team set a program record by peppering Florida Memorial with 47 shots in a blowout win. Pretty impressive, right? The No. 8 Spartans (2-0-0) made that look like child's play on Saturday. In the course of Tampa's 10-0 win over Georgia Southwestern, the Spartans racked up an unbelievable 98 shots to shatter the school record to pieces. Shannon Walisch recorded a hat trick, while Cici Gonzalez and Chelsea Martin scored two apiece. The win was also the 200th in program history, a sizable cherry on top of a big cake.