One of the nation’s deepest conferences in the women’s game – despite the loss of one of its top programs in West Virginia – looks just as competitive in 2012.

However, plenty of stacked programs remain, with Georgetown, Marquette, Notre Dame and Louisville among those looking the most dangerous.

Then there are programs such as Providence, Connecticut and Villanova looking to jump back into contention in their conference.

While much is up in the air, one thing is for sure – it’s going to be a challenging and tricky season in the Big East. 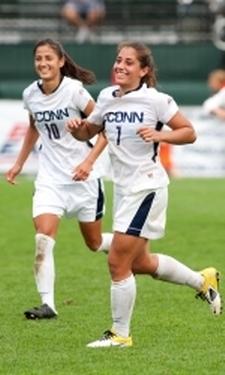 Head coach Len Tsantiris brings back a number of significant contributors from a year ago, with leading scorer Danielle Schulmann back in the fold, complemented by sophomore midfielder Riley Houle.

While last season was a bit down, many coaches are expecting to face a resurgent Huskies side this season.

Coming off a strong performance in 2011, can the Golden Eagles replicate their strong form?

It would be foolish to suggest otherwise, as among the returning starters includes forward Maegan Kelly, who drove the offense last year with 14 goals and 12 assists.

However, as long as solid replacements can be found for the graduated defensive duo of goalkeeper Natalie Kulla and defender Kerry McBride, Marquette should contend once again.

One of two Big East teams bidding farewell to the conference for an ACC move in 2013, the Panthers are a program looking for improvement after a poor 2011.

The team had problems at both ends of the park, conceding a whooping 46 goals as opposed to just 14 scored, meaning that their work is cut out for them.

There’s a new coach in town to try and accomplish a turnaround, as Greg Miller replaces Sue-Moy Chin as the team gets ready for its Big East swansong.

Twelve freshmen are joining the Friars ahead of this season, and at least a few of them will need to step up and account for themselves if Providence hopes to climb into contention.

It won’t be all about the new girls, however, with forward and red-shirt senior Laura DiClemente – leading scorer from a year ago – among those returning, alongside fellow seniors Mary Vercollone and Jenna Roncarati.

Another middle-of-the-pack team from last fall, St. John’s is a fairly experienced group that will play a factor in how their division plays out.

Forward Jen Leaverton has departed through graduation, and her 10 goals supplied in 2011 are going to be difficult to replace. Among the contenders to help step up and contribute even more will be All Freshmen Big East forward Caitlin McLaughlin and junior midfielder Amy Marron.

A team with 12 juniors and two seniors on the roster are going to be a plus as the season gets under way.

The Orangemen’s lack of offense last year was particularly harmful, as they averaged just slightly more than a goal per game throughout the season.

Among those looking to make amends for that will be sophomore midfielder Megan Hunsberger, aiming for individual success in a second straight year.

One win in the last seven games of 2011 cost South Florida a chance at a higher finish in the Big East.

And while the team has lost a couple of crucial pieces, there’s plenty of reason to hope, as key offensive weapon Demi Stokes is back, along with seasoned players like midfielders Taylor Patterson and Anne Vikre, along with defender Boo Eagle.

A mostly young team offers hope for improvement for the Bearcats, who will be led by second year stalwart Mackenzie Grause, junior Jazmine Rhodes and senior goalkeeper Kristina Utley.

Several close losses – nine by one goal and four in over time – consigned the Blue Demons to the bottom of the standings in the Big East.

Goalkeeper Megan Pyrz will likely get a chance to start again after playing in the last nine games of 2011, and other youngsters such as Sarah Gorden, Amber Paul, Rachel Pitman and Nikki Condit will be critical to any turnaround.

Head coach Dave Nolan is faced with the difficult task of replacing four of its best offensive players last year with the graduation of Kelly D’Ambrisi, Camille Trujillo, Samantha Baker and Ingrid Wells.

The Hoyas high-flying offense scored 53 goals last year, and with the loss, many could expect a drop-off in 2012 for Georgetown.

Of course, this is part of the college game, and Nolan is confident that the team will be ready to surprise people in some ways.

“We’re not the only team to ever have to deal with replacing good players,” he told TopDrawerSoccer.com. “You’re always trying to plan ahead, have players in the back of your mind to replace players down the road. It’ll probably be a big test for us.”

Nolan is already confident he has players who are ready to step into bigger roles, such as sophomore midfielder Daphne Corboz, who he labeled a “special player” and Jessica Clinton, who was limited in time last year because of the talent in front of her.

And while Nolan isn’t necessarily hoping for the same kind of attack, he thinks this team will create a new look.

“This team will develop its own personality – last year’s team was a very offensive, free-flowing team that could score many goals in many ways from many people,” he said.

Because of the unique transition between last year and this year, however, the need for a strong start for the Hoyas may be a bit more urgent than normal.

“Like any team, it’s going to be a younger team, so with that then I think it’s important we get off to a good start,” Nolan said. “Momentum goes a long way in any sport – good momentum or bad momentum.”

Last season was hugely successful for the Cardinals, as the offensive talents of Christine Exeter helped the team make a run in the NCAA tournament.

The beginning of the season will be a big test for Louisville, of course, because Exeter is likely to miss the first few weeks while on duty with the U20 Canadian National Team for the U20 Women’s World Cup.

She supplied 14 of the team’s 34 goals, but should be back for the meat of the Big East schedule, facing the likes of Notre Dame and Syracuse early on.

It’s far from a one-woman team, of course, and Erin Yenney will be among those helping carry the load while their All-American is overseas.

By their own lofty standards, 2011 was a down year for Notre Dame.

Unable to generate momentum in the Big East, the Fighting Irish slumped to a first round exit in the NCAA tournament.

With preseason just under way, optimism abounds out of Irish camp as Notre Dame prepares for another year.

“I really like where we are,” head coach Randy Waldrum told TopDrawerSoccer.com. “I’m more excited about it than I’ve been in awhile, mainly because they’re young, youthful, but at the same time, they’re such a good group of kids – they’re enthusiastic, the chemistry’s fantastic, it’s been great so far.”

It’s going to be a young group to help Notre Dame reach new heights, with an incoming class including the talented Cari Roccaro and Anna Maria Gilbertson among 12 new talents.

That’s not to say there isn’t any experience returning, as the likes of Mandy Laddish, Sammy Scofield and Karen Simonian are back. Laddish and Roccaro are set to miss the first few weeks of the season at the U20 World Cup as well.

If the Irish are to get back to the top, it’s going to come as a result of a herculean effort from their youngsters, though.

The Scarlet Knights kept things close a year ago, and a good amount of talent returns from that side. However, the biggest addition should be the health of Canadian international Jonelle Filigno. She only played in seven games and scored six goals because getting injured and missing the final 11 games of the season.

Her health is no doubt critical for an improved season, as is the success of other key players like defender Shannon Woller and goalkeeper Emmy Simpkins.

Another middle of the road team looking to jump into contention in 2012, Katie Ritter and Stephanie Soma are two of the best players the Pirates have on offer as they aim for the top of the National Division.

How will the Wildcats weather the storm of no first-choice goalkeeper over the first few weeks? Jami Kranich, who started all 19 games in 2011, is a member of the U.S. U20 team heading to Japan in August.

Perhaps more critical to Villanova’s succeses than Kranich’s absence is replacing the 12 goals and 5 assists of graduated forward Katie Ryan. One of the leading candidates is Stephanie Myers, who scored 7 goals and added 5 assists, or senior Heidi Sabatura (6 goals, 7 assists).