Undefeated heading into its Big East schedule, the rising Hoyas knew that the challenge from Rutgers was going to be substantial in  the conference opener.

And adding to the challenge was the absence of Hoyas’ starting goalkeeper Tomas Gomez from the starting lineup because of injury, leaving second string ‘keeper Keon Parsa getting the nod in net.

It all came to the fore in the second half, when Parsa was called into action to save a penalty kick to keep the game scoreless, setting the stage for Brandon Allen to bag the game winning goal five minutes into the first overtime period.

"Three points is important and we talk to the guys when we get into this time of year with the difference in how these games feel," Georgetown Head Coach Brian Wiese said in a release. "The challenge for us is, can we continue to relax and play and be who we are when the stakes get higher and higher?" 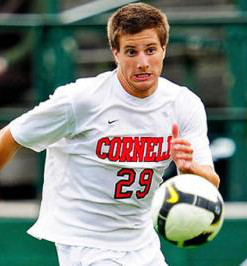 Allen currently leads the team in goals scored with 6 on the year, and 5 of those tallies are game winners. Georgetown heads on the road Tuesday night to face James Madison, who already knocked off then-No. 1 North Carolina at home.

Few other programs in the country can boast about putting in a better 45-minute performance than Marquette did against DePaul over the weekend.

The Golden Eagles scored five goals, from five different players, steam-rolling to a 5-0 win in its Big East opener on home turf over the weekend, extending its winning streak to eight games.

“I walked in at half-time and I said ‘I don’t need to fabricate anything, that was fantastic, five goals in one half,’” head coach Louis Bennett said after the win. “I looked up in the 35th minute and we had scored the fifth goal. We knew they had some tendencies and we knew what they may do, and their back line did those things. I thought our lads came out and were well prepared, our coaching staff did a good job scouting them and we did our homework.”

Matchups against Wisconsin and Providence in the coming days mean things don’t get any easier for Marquette.

Conference play is always a game changer, and that was just the case for both #12 Notre Dame and #22 Louisville this weekend.

Hosting the undefeated Irish, the up-and-down Cardinals sent the visitors home with nothing to show from the journey by securing a 2-1 win at Cardinal Park.

Midfielder Dylan Mares, still making his way on the comeback trail after an ACL injury derailed his 2011 season, secured the ideal start for the home side with his 34th minute goal.

If you had Cornell’s Daniel Haber as the nation’s leading scorer at this point in the season, take a bow.

The Canadian attacker kept his undefeated Big Red side in the win column, scoring two goals and notching an assist to secure a 3-2 win over St. Joseph's. The win extended Cornell’s record to 7-0-0 on the season, and Haber now has 11 goals through that same stretch to top the nation in scoring.

Ivy League action kicks off this weekend against Pennsylvania(m) as Cornell looks to keep things rolling.

The Fighting Irish weren’t the only team high in our Tournament 48 to fall this past weekend.

Normally a stout team on its home turf, #11 Creighton was picked apart by Saint Louis in a 3-1 win for the Bilikens. Substitute Raymond Lee scored twice for the visitors, as Creighton’s attempts to play a high pressing game continued to sputter.

The Colonial Athletic Association opener was supposed to feature the continued dominance of #15 Old Dominion. But a trip to Philadelphia turned out to be a trap for the previously high-flying Monarchs, as the Dragons scored two goals in each half to win running away by a 4-1 score.

In a highly-anticipated clash between #2 Connecticut and #16 St. John's, the Huskies got the better of the Red Storm in a 3-0 win. Carlos Alvarez scored twice to land him a spot on the TopDrawerSoccer.com Team of the Week.