The start of the 2013-14 college season will be here in just under a month, which means preparations for the opening game are well underway for most programs.

With the beginning of a new season comes the return of TopDrawerSoccer.com’s comprehensive preview of every conference in the country. In the opening installment, the Big South, SoCon, and Southland are previewed prior to what should be a noteworthy season for each of the three. Whether it is the return of a stellar goalkeeper, a striker looking to break records, or the introduction of four new programs, each of these conferences are heading into new territory this fall.

It certainly helps to have a good goalkeeper in college soccer, and Radford can claim the title of having the best one in the Big South Conference. Senior Che’ Brown was awarded with the Defensive Player of the Year and Conference Tournament MVP honors last season while leading the Highlanders to their second-straight conference crown. 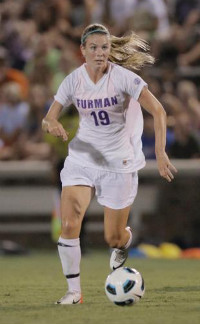 Brown has a collegiate career record of 35-11-5 and a 0.64 goals against average while compiling 227 saves. The Radford captain is not the only talented player returning to the Big South this year, as only three members of last season’s Big South First Team graduated.

Winthrop’s Krystyna Freda is back for her junior year after leading the conference as a sophomore with 14 goals and 34 points. Freda has been a dominate force since her arrival in the league, as she collected Freshman of the Year honors back in 2011.

The most recent Freshman of the Year, Fia Jonsson, is hoping to help Coastal Carolina into contention in the conference, as the Swede was a commanding presence in the center of the field during her debut campaign.

With all the returning standouts back, the race in the Big South Conference will be just as tight this fall, but can anyone stop Che’ Brown and Radford from a three-peat?

Stephanie DeVita won all the individual honors for the SoCon last year, but Furman, as a team, did not enjoy the same success. The Paladins went 7-2-2 in the conference behind a 19-goal effort from the freshman scoring sensation but came up short in the conference tournament and during the regular season.

UNCG won the regular season crown last year in Steve Nugent’s third season as the head coach of the Spartans. UNCG enters this fall riding a 21-game winning streak in road contests in the SoCon. The Spartans lost their two leading scorers from last year, but do return three sophomores-to-be who were solid in their debut campaigns in Chesney White, Zoe Fishman, and Katherine Rodriguez.

However, Georgia Southern represented the conference in the NCAA Tournament as the streaky Eagles beat Furman in a penalty kick shootout for the title. GSU started the season with a six-game unbeaten run but then only managed two wins over the next 11 games. An undefeated spell of five games to close out the regular season and conference tournament helped the program to its first SoCon Championship. Returning sophomore Nora El-Shami is one to watch as she showed moments of brilliance in her freshman season.

There are four new programs to the Southland Conference this fall, but will any stop the roll of Stephen F. Austin and Southern Louisiana, which have combined for 12 of the 18 conference titles? 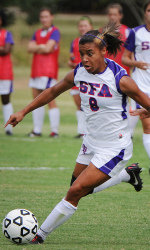 Stephen F. Austin is the most recent league and tournament champion after a dominating season in 2012. The Ladyjack roared to the NCAA Tournament before a hard-fought battle against Texas A&M that ended the run for the Southland Conference champions.

Historically, the Texas program has never won more than two league crowns in a row, which means 2013 should be up for another squad. But, it is difficult to look past them, even with a new head coach, as former Texas A&M assistant Wally Crittenden replaced Tony Amato, who departed to take over Arizona's program. The Ladyjacks have depth and return a number of key pieces from last season including four All-Southland Conference First Team members. Perhaps most difficult for Crittenden will be finding a way to replace Kylie Louw, the three-time Southland Conference Player of the Year, which should be a task for a number of players to fill.

Past Stephen F. Austin, Lamar, Southeastern Louisiana, Oral Roberts, and Central Arkansas all finished above .500 overall on the season last year. Lamar returns Jannet Hernandez, Kristin Bos, and Amber Thornhill all members of the Southland Conference Second Team last season, and looks to build off of Orlando Cervantes’ strong first season in charge. The Lady Cardinals return nine starters and should be a threat in the conference.

Southeastern Louisiana will be searching for some veteran leadership this season with only two seniors on the roster in Shanyce Shaw and Kelsey Salcido, a Second Team Southland Conference midfielder last year. Head coach Blake Hornbuckle has a proven track record of success in the conference, which always makes the Lions a favorite to lift the trophy.

The four newcomers to the league are an interesting quartet with only one holding Division I experience, Houston Baptist. Abilene Christian and UIW have been promoted from Division II while Texas A&M-Corpus Christi is a brand new program.