The College Cup field is set.

Indiana, Georgetown, Maryland and Creighton will all head to Hoover, Alabama this week and vie for national title honors as the men’s college soccer season draws to a close with its showcase event.

While two of the four teams clinching spots were top seeds, both Indiana and Creighton secured their spots thanks to upset wins, as the Hoosiers beat defending champions North Carolina 1-0 in Chapel Hill, while the Blue Jays secured a win by the same score against Connecticut up in the Northeast. 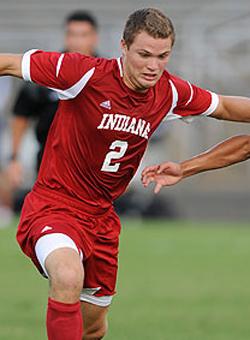 One week after his goal against Notre Dame won the game for Indiana in overtime, Eriq Zavaleta played the role of hero once again. The sophomore forward found the back of the net in the 60th minute, as the Hoosiers hung on to snap North Carolina’s 40-game winning streak at home.

However, of the quartet, Creighton’s run is perhaps the most remarkable, as the side that made it to the College Cup in 2011 lost nearly their entire starting lineup. After knocking off Akron on the road in the third round, the Blue Jays upended the favored UConn squad thanks to Christian Blandon’s goal with 90 seconds remaining in the game.

For the two higher seeds, it was a much more comfortable outing for the Terps. Facing Louisville, the squad that ended their season a year ago, Maryland took a 2-1 lead thanks to Jake Pace’s goal 40 seconds before the half, and Patrick Mullins added another in the second stanza to win 3-1 and ensure that there wasn’t a repeat of 2011.

"We played a great game against one of the great teams in college soccer...against one of the most well-coached, skillful and determined teams in the country," head coach Sasho Cirovski said afterward. "This game had a lot of intrigue to it and our team came out with a hunger, a tenacity, a determination and a skillset that carried us through.

"I am delighted our seniors will have a chance to experience the College Cup. Every player that came here since 1994 has had a chance to play in the College Cup, and this set of seniors was not going to let that pass us by. They worked their butts off."

Not to be outdone by the Cinderella story of San Diego, Georgetown overcame a 1-0 deficit to clinch a 3-1 win over the Toreros, getting the game winning goal from freshman Melvin Snoh, and tacking on an insurance tally late in the second half.

“This feeling is just awesome,” Georgetown head coach Brian Wiese said after the game. “This postseason has been really interesting for this team since we were expected the get there, being the three seed, but we've never done it before. How you manage that dual mentality is really interesting and I'm so proud of them."